Although it is clearly verifiable that bulldozers have especially targeted the minority community, Hindus too have not been spared 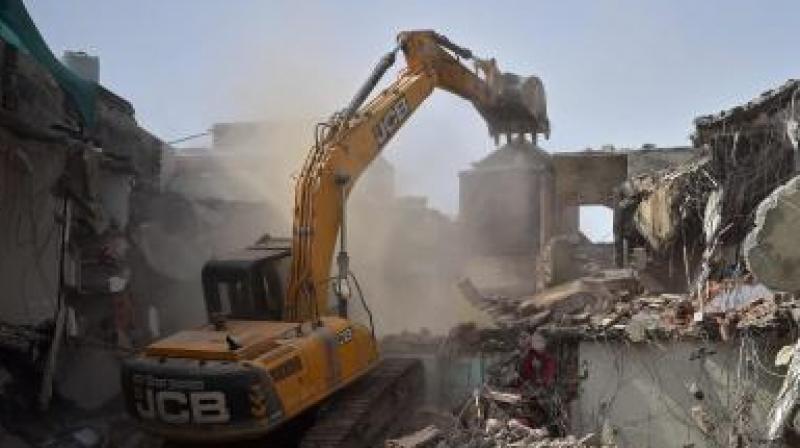 As leading lawyer Kapil Sibal said: “When a bulldozer razes my home to the ground, it seeks to demolish not only the structure I built, but my courage to speak up.” (Representational Image)

Popular film director Rohit Shetty of Singham fame would hardly have expected that his name would crop up in the court of the Chief Justice (CJ) of Assam. Last week, in a hearing which has not received as much attention as it should, CJ R.M. Lakhya scathingly told the state counsel representing the Assam police, that the conduct of the local Superintendent of Police (SP) was so lawless that only a Rohit Shetty film could portray it.  The comment was made, as Justice Lakhya said, “in a lighter vein”, but his next question was deadly serious: “Is it a gang war or a police operation?”

The observations of the CJ came in a case where it had taken suo motu cognizance of Assam police bulldozing the houses of six men accused of burning a police station in Nagaon district in May 2022, in retaliation to an alleged custodial death of a local fisherman. The two-judge bench, headed by chief justice R.M. Chaya, thundered at the state counsel: “You show us from any criminal jurisprudence that for investigating a crime, the police without any order, can uproot a person and apply a bulldozer.”  When the state counsel persisted in his plea that it was an investigative action, the chief justice expressed outrage: “This (action) is unheard of, at least in my limited career.  I have not come across a police officer using a bulldozer by way of a search warrant.” Searching a house needs a warrant, the chief justice emphasized.  ‘Even if a very serious matter is being investigated by an agency, bulldozing a house is not provided under any criminal law… “Tomorrow if you need something you will dig up my courtroom... Nobody is safe in this country if this kind of action is permitted.”

Going beyond the criminality of this incident alone, the court raised important larger questions. It was constrained to remark that “we are in a democratic set up… there is a purpose why the words ‘law and order’ are used together.  This is not the manner in which ‘law and order’ is controlled.” The law, the bench observed, applies to all. “Even higher-ups in government need to pass through the gamut of law. Only because they are the head of the police department, they cannot break anybody’s house.”

Undoubtedly, criminals need to be punished. Dandaniti, or the doctrine of punishment, is given due importance in Chanakya’s Arthashastra. The power of exemplary punishment, the treatise says, is essential to preserve the supremacy of the State and the maintenance of social order. The Manusmriti, too, is categorical on this: “Punishment alone governs all created beings, punishment alone protects them, punishment watches over them while they sleep; the wise declare punishment to be identical to the law.” But the Arthashastra also prescribes limits to the use of Dandaniti. The king, although all powerful, was conjoined, for the sake of the power that he wished to retain, to work in conformity with dharma, and respect established customs. The Mahabharata bluntly emphasizes: “Let the king first discipline himself. Only then must he discipline his subordinates and his subjects, for that is the proper order of discipline.”

In the modern context, “discipline” must include respecting the rule of law, the Constitution, and the fundamental jurisprudential tenet that a person accused of being guilty should have a chance to prove his or her innocence. It is true that justice delayed is justice denied. Our legal system is so tardy, that the guilty go free or unpunished for years taking advantage of the due process of law. But should this mean that we dispense with the law itself? This question should make us pause to reflect, because while summary ‘justice’ has a primitive, macho appeal,unchecked power leaves all citizens vulnerable. Those who celebrate it could it be its next victim. A distant relative of mine, who was enthusiastically supportive of the Emergency (1975-77), had a young nephew sterilised as punishment for travelling ticketless on a bus. There was neither a nexus between crime and punishment, nor recourse to justice. When the consequence of unchecked power hit so close to home, he realised why it was so dangerous for him.

Although it is clearly verifiable that bulldozers have especially targeted the minority community, Hindus too have not been spared. On March 28 this year in Madhya Pradesh, the house of a Mahant was summarily demolished in an allegation of rape. Rape deserves the severest punishment, but when extrajudicial power is legitimised once, it prepares the ground for its repeated use even in routine matters. The ambit of those targeted progressively enlarges, as the State is emboldened to believe that what it is doing illegally has popular backing. The focus can then shift seamlessly from a particular community to anyone who is critical of the State, or not sufficiently compliant.

Moreover, arbitrarily demolishing a house not only targets the allegedly guilty, but punishes the entire family that lives in that home. When an illegal act is self-righteously justified or endorsed, it acquires a populist momentum of its own. A certain chief minister is appreciatively called ‘Bulldozer Baba’, and toy replicas of bulldozers are flaunted about by his enthusiastic followers in his public meetings.

Is this CM not bothered at all by the Supreme Court’s warning that bulldozers must be used in accordance with law and should not be retaliatory? The temptation to make the breaking of law the norm is highly seductive for vote seeking politicians. Following the riots in northeast Delhi in April this year, local authorities issued immediate demolition orders against some of the accused, although the Delhi Municipal Corporation Act requires notice to be issued before such proceedings, and adequate time to seek an appellate remedy. The Supreme Court issued a directive to stay the orders, but reportedly the demolitions went on for an hour after that, until the highest court intervened again.

In a democracy, citizens need to be vigilant about the misuse of power. If they are not, they could be next. Fundamental rights and freedoms need to be protected. As leading lawyer Kapil Sibal said: “When a bulldozer razes my home to the ground, it seeks to demolish not only the structure I built, but my courage to speak up.”