All rivers have a lore for people settled on their banks and beyond, but the Ganga is different because it is special to us 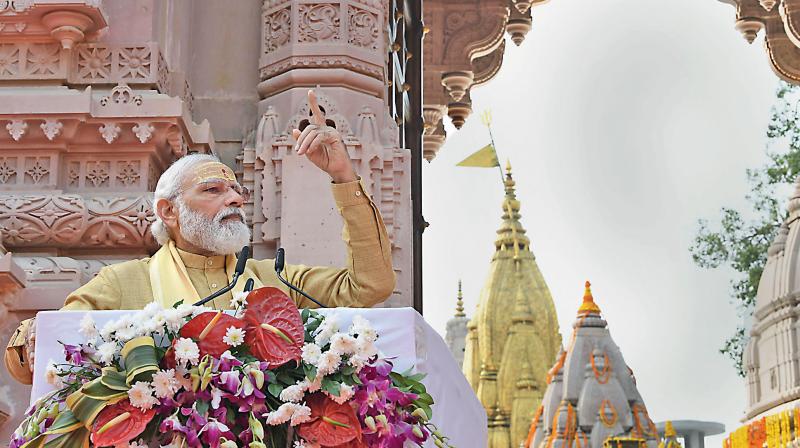 Satyajit Ray, whose centenary is being observed, would have difficulty locating the lanes of Kashi, so central to the Apur Trilogy that launched him as a master on the firmament of world cinema. The razzmatazz would have been closer to the taste of K. Asif of Mughul-e-Azam.

Absolutely riveting, the imperious precision of Prime Minister Narendra Modi’s strides on the spotless red carpet. By comparison, Prithviraj Kapoor would pale. Is it politically incorrect to imagine that the strains of music Bismillah Khan played at the temple would have enhanced the event’s choreography?

I may be forgiven for feeling a little bit like Shambhu in Bimal Roy’s masterpiece, Do Bigha Zameen. Shambhu, on whose land a factory has come up, regards his plot from behind barbed wires, bends down and picks up a fistful from the field he once ploughed. Oh, my numerous visits to Kashi with my friend and outstanding architect, the late Satish Grover.

All rivers have a lore for people settled on their banks and beyond, but the Ganga is different because it is special to us.

Iqbal was not remembering Aurangzeb; he was celebrating the dawn of a civilisation on what the British called the Indo-Gangetic plain.

The Ganga was part of our songs, similes and metaphors. As children, we never forgot to toss coins in the great river and make a wish whenever the train crossed the bridge. During the Urdu-Hindi debates, my grandfather could only fall back on the image of Ganga: “Hai dua yeh, ki mukhlif jo hain dhaarey mil jaaen/ Aaj phir kausar O Ganga ke kinarey mil jaaen”! (Streams of Urdu and Hindi should/ flow together, not in opposite directions/May the banks of Ganga and ‘kauser’, the river of paradise, become one!)

To fight penury, the great poet Ghalib (1797-1869) embarked on a journey to Calcutta (now Kolkata) to have an old pension revived by the British authorities. He travelled on horseback, carriages, on foot and river barges. He disliked Allahabad but found Benaras so compelling that he put down anchor for an extended stay. Here he wrote his longest poem Chiragh e Dair, or The Lamp in the Temple. He sees Benaras like a beautiful woman who sees her face in the Ganga at all times: “Ibadat khana e naqoosian ast/ hama na kaaba e Hindustan ast!” (This is a place of worship where people/ make music from conch shells/ This truly is the Kaaba of Hindustan).

Ghalib was not the first to compare Benaras with Kaaba. Sheikh Ali Hazin from Isfahan, Iran, found it impossible to separate himself from Benaras which, he wrote in Persian, is all mankind’s place of worship:

“Har Barahman pisare Lakshman-o-Ramast een ja” (To me every Brahmin here looks like the very son of Ram or Lakshman).

When Mohsin Kakorvi (1826-1905) sketched the elements in ecstasy on Prophet Mohammad’s birthday, the most picturesque image he could conjure up were of clouds floating over Kashi and drifting towards Mathura. “Samt e Kashi se chala jaainbe Mathura badal!”

Ali Sardar Jafri (1913-2000) positions himself in “Benaras” when he seeks cultural commerce with friends in Lahore: “Tum aao gulshan e Lahore se chaman bar dosh/ hum aayen subhe Benaras ka baankpan le kar!” (You come to us with breezes from the garden of Lahore;/ we bring to you the exquisite dawn of Benaras).

If I have inflicted on you a surfeit of poetry it is for a compelling reason. This is my way of re-establishing my claim to the civilisation bound with Kashi and the Ganga, from which I was distanced by the choreography of the pageant last Monday.

By firing the Aurangzeb missile, you froze us in our tracks. If we reiterate what some of us have proposed for a long time, it will be seen, in the current jingoism, as our having succumbed to pressure. A reasonable conversation on such charged issues as Ayodhya, Kashi and Mathura are possible when the communal temperatures drop.

Just as every musical score requires a counterpoint, there are plenty of Muslim busybodies willing to take hard positions to keep communal tension at boiling point. There is, after all, no papacy in Islam. No edict can be issued which ensures the community will fall in line. The Muslim Personal Law Board, to remain alive, must take a stand which represents the mainstream devout. In other words, “dig your heels in”, which is precisely what the Hindu Right wants.

The late Maulana Kalbe Sadiq, a liberal to boot, maintained a Muslim can spread his prayer mat anywhere facing Mecca and say his prayers; a Hindu’s deity is in the temple. By this logic, mosques in Ayodhya, Kashi and Mathura represent medieval assertion and will only hurt the Hindu.

Mir Taqi Mir had shown us the way in the 18th century: “Mut ranja kar kisi ko ki apney to etiqaad/ Jee dhaye ke jo Kaaba banaya to kya kiya!” (Don’t hurt a fellow human being;/ It is my belief that even building the Kaaba is not worth it if hearts are broken in the process). The verse applies to both sides.

Wouldn’t it be wonderful if one of the many singers of Benaras were to set the following verse to music: “Kooch a e yar ain Kashi hai/ Jogia dil wahan ka baasi hai!” (My beloved’s lane is like holy Kashi/ The yogi of my heart has taken up residence there.)

The poet is Wali Gujarati (1667-1707). His grave outside Ahmedabad’s main police station was razed to the ground by rioters in February 2002.