V. Vijayasai Reddy | No space for communal politics in AP under Jagan

V. Vijayasai Reddy
The writer is a Rajya Sabha MP and YSRCP Parliamentary Party leader and YSRC’s national general secretary. He can be reached at: venumbaka.vr@sansad.nic.in. 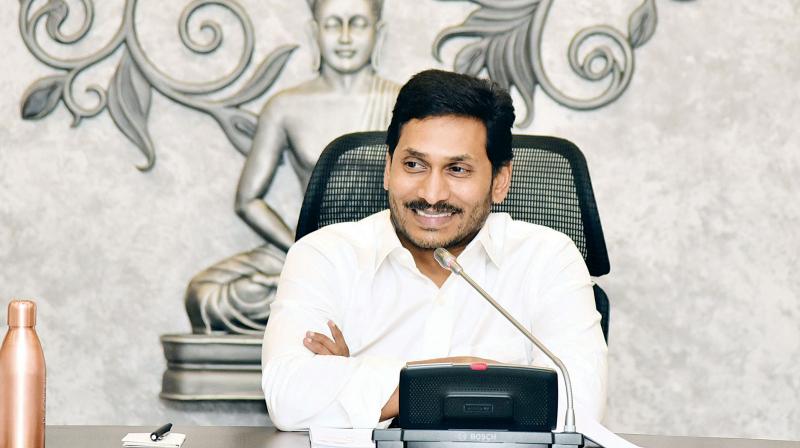 With the Jagan Mohan Reddy government’s focus fixed on development and the state’s welfare, there is no political space for the Opposition. (DC file photo)

Miscreants associated with Opposition parties in Andhra Pradesh are vandalising and desecrating temples to destabilise the democratically-elected YSRC government led by Y.S. Jagan Mohan Reddy as they feel religious sentiments can be exploited to create a communal flareup.

Bizarrely, some of them, after instigating/condoning such attacks for political gain, accuse the YSRC of being responsible. Why would any government or ruling party attack temples or idols? How would it benefit to hurt the sentiments of a majority of people?

With the Jagan Mohan Reddy government’s focus fixed on development and the state’s welfare, there is no political space for the Opposition. The CM has likened such attacks on religious sites as “political guerrilla” warfare. The Opposition must understand that in the minds and hearts of Andhra’s people, the CM doesn’t belong to a particular religion but is a leader of all sections.

India is a religious society. Religion plays a key role in the lives of most Indians. It is an indispensable and foundational part of our society. Faith underlies our ceremonies, festivals, even harvest celebrations.

The Constitution explicitly recognises this, and provides for a country based on secularism, with tolerance and respect for all religions. Andhra Pradesh has seen a spate of temple desecrations of late. These cowardly attacks need to be tackled firmly by the State, creating a strong deterrent.

While the law will take its course and the CM has given assurances, it is important to gauge the action, attitude and role of the Opposition. While the state government has stuck to its constitutional obligation and is rolling out welfare schemes without discrimination, the Opposition led by former CM N. Chandrababu Naidu is politicising these unfortunate events to incite communal feelings.

Mr Naidu’s desperate actions shows he realises the massive erosion of his political capital and support. He has resorted to such dirty communal politics as his development/welfare activities as CM don’t compare with what young Jagan Mohan Reddy has achieved in less than two years.

The Opposition’s role is to criticise and correct the government in areas that positively affect people. The Opposition’s criticism should force a government to take more steps towards effective governance. But the TDP-led Opposition in Andhra aren’t playing this role and are instead damaging the state’s social fabric by stoking religious sentiments. Mr Naidu’s actions are a great disservice to the nation at large and setting a wrong precedent to other regional parties – to turn communal as their last option to remain politically relevant.

The Supreme Court, way back in 1994, warned of the perils of inciting religious feelings in the landmark nine-judge bench ruling in S.R. Bommai versus Union of India, where it said: “In a secular democracy like ours, mingling of religion with politics is unconstitutional”. Its implication was clear -- communal politics are a flagrant breach of our Constitution and of the secular democratic ethos. It is imperative that religion and caste aren’t brought into politics by any party, association or individual.

Communal hatred is being used in Andhra to divert people’s attention away from the unprecedented welfare schemes of the YSRC government. Recently, the CM flagged off the distribution of 30 lakh housing sites, an initiative to help every citizen fulfil their dream of owning a site and house. The Opposition couldn’t digest such progress. This had led the Opposition parties to resort to communal politics to play spoilsport.

Note the factual irony of the Opposition protests on the issue. Data on attacks on temples in AP shows that in 2020, 228 cases of attacks on temples were registered, compared to 305 cases in 2019, 267 (2018), 318 (2017), 332 (2016) and 290 cases in 2015. The attacks on temples under the YSR Congress government has actually reduced. It also shows clearly that the issue had more potential to be communalised when Mr Naidu was in power. As the principal Opposition party then, we could have done the same thing, but didn’t.

Ever since Jagan Mohan Reddy came to power in May 2019, communal politics have been used to target his government, despite his repeated assertion that “humanity is his faith”. Mr Naidu is playing religious politics with an ulterior motive of undermining the YSRCP government and polarising votes on religious lines. During the TDP government, Mr Naidu demolished many temples on Vijayawada’s Krishna riverfront, razing them to the ground with bulldozers in the name of Pushkarams. He vandalised the famous thousand-pillar mandapam in Tirumala, even sold the lands of Sadhavarti, performed tantric rituals in the Kanaka Durga temple. A pink diamond went missing during his rule, which was later sold for `500 crores in a Sothbey’s auction in Geneva.

Andhra Pradesh DGP D. Gautam Sawang has issued an alert across the state, asking all police officials to increase vigilance at temple sites. CCTV surveillance at all places of worship are being ramped up to monitor all movement at shrines. Over 2,600 temples across Andhra have been mapped for installation of CCTV cameras.

Finally, it’s pertinent to note most attacks have taken place in temples run by TDP leaders. For instance, the temple with the Ramatheertham idol was headed by former TDP MP Ashok Gajapathi Raju, who has now been removed from his post by the state government.

Despite the Opposition’s communal politics, the state government’s conscience is clear. We will strive for development, irrespective of caste, creed, race, religion or gender, keeping in mind the principles enshrined in our secular Constitution and strive to make Andhra Pradesh India’s number one state.