The “farmer” image, Mr Palanisamy hopes, would help in the 2021 Assembly elections. 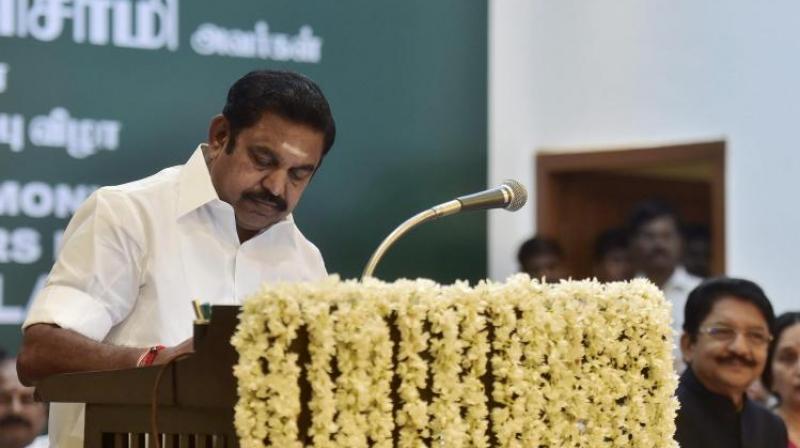 The AIADMK’s government’s latest expression of solidarity with those protesting against CAA, NRC and NPR in Tamil Nadu is a missive by the chief minister, Edappadi K. Palanisamy, and his deputy O. Panneerselvam to the Centre urging it to exclude “needless” questions during the enumeration of the next Census, vaguely suggesting that all might not be hunky-dory with the coming NPR.

Prior to that, when over 20,000 vocal protesters marched to Fort St George, the seat of power in Tamil Nadu, on March 19, they were stopped by a wall of iron barricades and allowed to disperse meekly after handing out a 24-hour ultimatum for the state legislature to adopt a resolution against the CAA.

He should have heaved a sigh of relief for there was no compulsion for an unsavoury crackdown as it happened a few days earlier when a protest against CAA, NRC and NPR in north Chennai was violently dispersed by the police, at least for that night, leading to eruptions of anger all over the state the next day.

So, it was indeed intriguing that the chief minister let the marchers cover a distance peacefully and it was more baffling that he wrote to the Centre to refrain from asking pesky questions during the Census when he had, on March 18, challenged an Opposition MLA to prove which Muslim has been affected by the CAA and his own party MPs in Rajya Sabha had voted en masse in favour of the bill to bring in CAA.

Has the chief minister suddenly realised his mistake in the 12 MPs not defeating the bill in Rajya Sabha and hence moved away from the BJP? If that is the case he could have passed a resolution in the House against the CAA, as it was demanded by the prime Opposition party, the DMK, and also the protesters who marched up close to the Assembly.

So, is Mr Palanisamy caught in a Hamletian dilemma to decide who is important for him? Yes, and the choice is between the people of the state, whom he would have to meet and seek votes in a little over a year from now, and the BJP government in New Delhi, under whose spell he was believed to be in since February 2017 when he became chief minister, a momentous occasion that saw its third anniversary recently.

In the three years since, Mr Palanisamy has been least bothered about public sentiments. On May 22, 2018, the state police ruthlessly opened fire upon common people, protesting against a private company, Sterlite, at Thoothukudi in south Tamil Nadu and shot down 13 people. Prior to that, AIADMK MPs — there were 37 of them in Lok Sabha, the third biggest group, then — voted for the GST and NEET bills, which went not only against public sentiments in Tamil Nadu but against the wishes of their late leader, J. Jayalalithaa.

Besides, the conduct of the government itself gave rise to suspicions of the AIADMK being guided by acolytes of Hindutva and it was proved right recently when auditor S. Gurumurthy openly stated at a public meeting as to how he had urged Mr Panneerselvam to rebel against V.K. Sasikala, when she was all set to take over as chief minister prior to her latest incarceration. Mr Gurumurthy proudly said that he had asked Mr Panneerselvam if he were a “man”. Mr Paneerselvam went on to divide the party into two.

When the two groups merged, the AIADMK was projected as a party with a dual leadership. So in all government publicity material the images of both the chief minister and the deputy chief minister were displayed with equal significance. But Mr Palanisamy’s completion of three years in office on February 16 saw him alone in the limelight, portrayed as the undisputed leader.

He started behaving like one too. Like, when the bill to declare the Cauvery delta region a protected agricultural zone was passed on the last day of the Budget Session, Mr Palanisamy elbowed out the agriculture minister and cornered all the accolades to him inside the House.

Outside the House, the move was used to earn for him the sobriquet “saviour of the farmers” as there was a growing resentment in the state against various projects on the exploration of methane, hydrocarbons and so on being carried out in the delta region, which is the rice bowl of the state. He was projected as one who protected farmers’ interest by piloting the bill.

That was just a continuation of an image building exercise aimed at portraying Mr Palanisamy as a farmer himself. It began during the Pongal celebration when a Tamil television channel did a special programme on the chief minister, shooting him with farming paraphernalia in a field. Newspapers were provided with pictures of him with a sickle and so on.

Perhaps the image building is done on the premise that public memory is short. Not too long ago, the state was rocked by a farmers’ struggle against the proposed Rs 10,000 crore Salem-Chennai highway. The project is now in a limbo due to a high court order. Otherwise, hectares and hectares of agricultural land would have been levelled by now with bulldozers to pave the way for the laying of a 277-km eight-lane road.

When farmers fought tooth and nail against the proposed project, the state government, under Mr Palanisamy, took an inflexible stand and sought to quell the protests. However, farmers associations preferred legal remedies that have put the project on hold, though the case is now in the Supreme Court.

Hoping that people may not remember that, Mr Palanisamy pulled out his latest caper in piloting the Tamil Nadu Protected Agricultural Zone Development Bill that was passed on the last day of the Budget Session in the Assembly evoking mixed reactions from stakeholders.

He first made a grand announcement of his plan to declare the Cauvery delta as a protected agricultural zone while speaking at an official function at Thalivasal in his native Salem district on February 9; he added “I am a farmer”.

The “farmer” image, Mr Palanisamy hopes, would help in the 2021 Assembly elections. In fact, as of now, the entire AIADMK rallies around him, though it seems to find the BJP to be an albatross around its neck. But after travelling such a long distance with the BJP, at least since 2017, it may not be that easy for Mr Palanisamy to shake it off.