After rampaging diseases, our single biggest problem is male violence 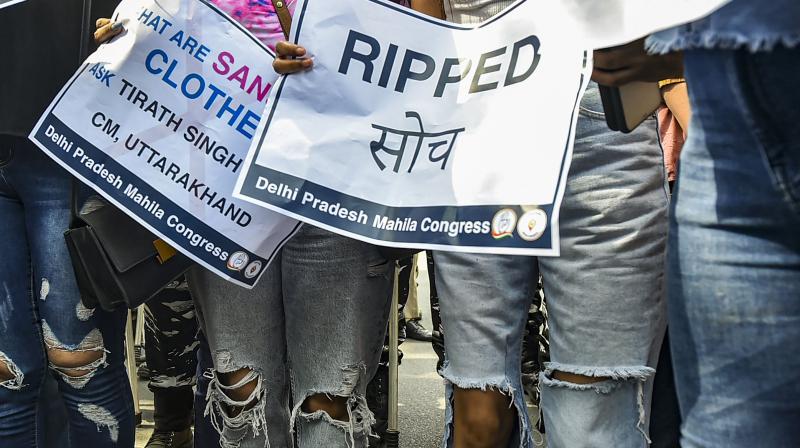 We’ve all been here before; reassured by our leaders that they’ll take firm steps to protect women, we watch history repeating as they blithely fail. (Photo: PTI)

Around the world in March, millions died from Coronavirus, cancer, and the many maladies we don’t seem able to prevent or cure. And with our new irrational rejection of vaccines, including the ones that have conclusively, over centuries, helped eradicate disease, millions more will perish. But, after rampaging diseases, our single biggest problem is male violence, surely, whether it manifests itself in full-scale warfare, environmental degradation, or the brutalisation of the vulnerable, including women?

This month (and every other in my long career as a woman), I have despaired over the widespread murder of women. As I lament the loss of London’s Sarah Everard, the six Asian women gunned down in Atlanta, and the rising tide of femicide of the past weeks in India, I am gripped by a terrible déjà vu.

We’ve all been here before; reassured by our leaders that they’ll take firm steps to protect women, we watch history repeating as they blithely fail. And like a cracked record I find myself railing against our mistreatment again; fitfully hopeful that speaking up might make a tiny difference. Didn’t the Suffragettes’ dissent eventually garner votes for British women? Didn’t the recent Indian Farmers’ Protest, especially the tenacity of its women, focus the world’s attention on their predicament? Yet, over time, so little has changed for the better in man’s treatment of man, and indeed, WOman, that my faith in our voices being heard has been shaken.

What would our sagacious leaders suggest we do instead?

1) Talk less, say Japanese Olympics chiefs Mori and Sasaki. If women stopped airing their concerns, according to them, ‘women’s problems’ would simply evaporate (so negligible are they). And isn’t it a fact, such men point out, the moment women stop ‘nagging’, nobody hears about these issues again?

Proving they never actually existed. All it requires then to solve ‘women’s problems’, is for women, or nags, hags, and “Olympigs”, as Sasaki would have it, to keep quiet.

2) Be seen less, spouts the Uttarkhand CM, in charge of an Indian state of around 5 million women. Bare female knees, sayeth he, will be the undoing of society. Leading to the collapse of morals, sense, and civilisation, ultimately. Haven’t we heard that (and similar) from the patriarchy, times without number? Nor can it be wrong, surely, if so many men agree? Women revealing anything at all, including their capabilities, are immoral, dangerous and destructive. The only women worth respecting are the ones you can’t see. Or hear. Because quiet, retiring women, whether locked in their homes, muzzled, or DEAD, can’t upset our perfectly inequitable planet.

3) Walk less too, we’re told often. Women shouldn’t go anywhere on their own, except in a straight line between work and home. Not that every place of work is acceptable! If you work in a spa for example, you might get bumped off by frustrated men, and the fat-cat-owned media will slaver over it, but have no sympathy to spare. And even less action will be taken. Taking the path that suits you – literally and figuratively as well – is not for women, you expect Dark Age patriarchs to proclaim. But no, this is the message from our modern judiciary and police: guardians of our wellbeing. In Britain this month, not only was it revealed that a policeman had murdered homeward-bound-after-sundown Sarah Everard, they then stymied multiple vigils to mourn her in the name of Lockdown. Like all stalwarts of the status quo, I suspect they’d suggest a woman’s place is at home if they could. The necessary Lockdown mantra of ‘stay home, stay safe’ has never been just a pandemic-protection slogan when it comes to women, but imposed rules to live by through history. It kept us so safe sometimes, we never felt pain again: as the reality of 137 women killed around the world DAILY by men intimately known to them attests.

But if staying home, staying covered, staying silent, hasn’t spelt safety for us, what will? Unlike the prized collection of exotic birds we’re sometimes perceived to be, safety is only a small part of our needs. We must continue to educate. Teaching women early to be free, to aspire to every wonderful opportunity this world has to offer, and young men to respect these same freedoms and aspirations in women, is key. But as the mother of both a son and a daughter, I’ve discovered that this is harder to achieve than I’d imagined. We encourage, support, and role-model the right behaviours for both, yet find that the occasional stereotype, or mild sexist trope, still wends its way home. Through conversations with our children, their friends and teachers, it’s become obvious that this is the influence of playground chatter, media and the Internet; as much of which we vet as possible, like all concerned parents. Yet, the trickle that filters into their lives is proof of the pervasive nature of prejudice, and how impossible that is to eliminate entirely. And is shielding from reality the right approach anyway? So, we discuss inequities with them instead, explain why they’re wrong, where they come from, and how best to address them. Thus teaching them both NOT to ‘know their place’.

That isn’t a complete solution either, is it? Just like protecting ourselves isn’t enough, nor protesting. What’s required, of course, is a major overhaul; systemic change that runs deep and wide through society, and belongs to us all. The answer then, though neither original nor revolutionary, lies in connecting the dots — literally! Because “dots”, funnily enough, is what middle-class India calls its daughters. Our political leaders and corporations don’t want upheavals, and activist organisations sometimes grow too big to make a deep-rooted difference. But if we can join, in small but ever-widening circles, our young women (and many peaceable men) – the dots – to work towards change, whilst providing support and the benefit of our experience, there’s hope yet. The possibility even of societal transformation. Then, no matter what our sex, sexuality, class, caste, colour, age or creed, we might finally walk, in darkness and in light, bare-kneed or bare anything-at-all, any which way we please.