Heading to the moon: The real success story

All of India clapped in appreciation as the rocket carrying the country’s first moon lander and explorer went into a 23-day orbit around the earth. 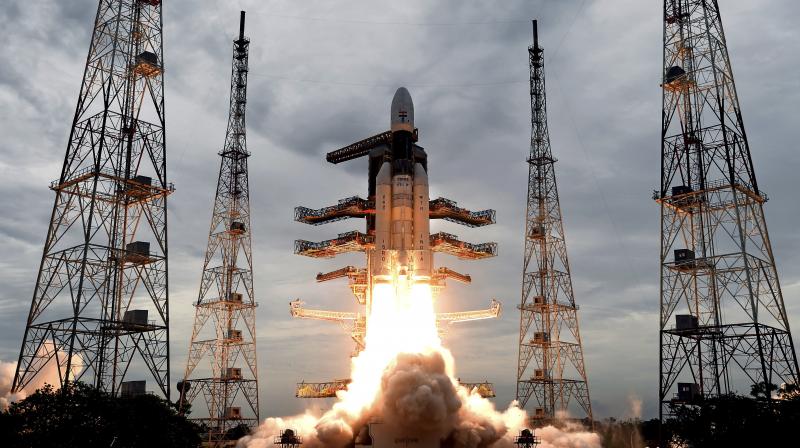 The launch of Chandrayaan-2 (which means “moon vehicle” in Sanskrit) is rightly seen as a sum of two achievements — the success of the country’s space programme as well as the country’s gradual but difficult ascension from poverty and ignorance during the last seven decades. (Photo: AP)

Ritu Karidhal’s journey from a middle-class home in the nondescript north Indian town of Lucknow to the limelight as mission director of India’s moon mission 2019 is in some ways even more spectacular than the launch of the Indian Space Research Organisation’s moon vehicle that roared into space in the afternoon of July 22, 2019.

All of India clapped in appreciation as the rocket carrying the country’s first moon lander and explorer went into a 23-day orbit around the earth. Politicians waxed eloquent, columnists hailed the event while millions of Indians tweeted in delight and pride at the fact that their country was aiming for the moon.

The launch of Chandrayaan-2 (which means “moon vehicle” in Sanskrit) is rightly seen as a sum of two achievements — the success of the country’s space programme as well as the country’s gradual but difficult ascension from poverty and ignorance during the last seven decades.

This is not jingoism but fact. And Ritu Karidhal is a symbol of that success. To belittle or deny that would be churlish as well as purblind.

Ritu Karidhal recounted her journey to a newspaper interviewer: “I was a simple girl from Lucknow, who was curious to know about outer space and who got a chance to be associated with the Mars Mission. With the success of the Mars mission, 1.3 billion Indians proved to the world that we have the capability to go this far into outer space and that we are as competent as anybody out there.”

She is not the only remarkable story behind the moon mission. The mission’s project director, Muthayya Vanitha, too is a woman of middle-class beginnings, who went on to become the winner of the “Best Woman Scientist Award” in 2006. Another 30 per cent of the Chandrayaan-2 team are reported to be women.

Significant too is the fact that Isro’s current chairman, Dr K. Sivan, is the son of a farmer who studied in in a Tamil medium government school in a village. Another key figure in the moon mission, astrophysicist Anil Bhardwaj, director of the Physical Research Laboratory, was born in a remote village in Uttar Pradesh’s Aligarh district, and came up the hard way.

These men and women illustrate the emergence and growth of a formidable class of technologically competent, highly educated Indians capable of standing up against the best minds in the world.

This, from a country where just seven decades ago people lived for an average of just 32 years, marrying while they were mere children, becoming parents in their teens and entering old age in their twenties, is an achievement that is without historical parallel.

India, not so long ago, was the land of famines, emaciated villagers and desolate villages. The country’s colonial masters scorned the natives and prided themselves for administering a country of illiterates who were supposedly incapable of governing themselves.

Today, unshackled India’s gross domestic product (GDP) is bigger than its erstwhile masters’ and the fifth largest in the world. Its poverty rate was 70 per cent when it gained Independence from Britain; today it is 21 per cent. Literacy during that period is up from a mere 14 per cent to 74 per cent.

Many failures might mark India’s recent journey, and there are a number of very dark areas that continue to haunt the nation, but there can be no doubt that India has come a long way — much beyond the expectations of its once derisive masters.

Today, an entirely made-in-India spaceship prepares to hurtle towards the moon. The rocket carrying the spaceship blasted off from the Satish Dhawan Space Centre at Sriharikota, Andhra Pradesh, at 2.43 pm on July 22, beginning a six-week odyssey that will take it 384,000 km across airless space to its final destination near the south pole of the moon.

It is many ways an extraordinary endeavour. Circumscribed by a relatively modest budget of about $130 million, or about `978 crores, and a correspondingly small rocket. India’s launch vehicles, the GSLV Mark-III, is small compared to the giant Saturn V rocket used by the US Apollo programme and required the ingenuity of Isro’s space team to come up with a solution to sling Chandrayaan-2 to the moon.

To compensate for the relatively low boost of the Chandrayaan-2 rocket, Isro scientists decided to put the spaceship into earth orbit for 23 days during which it will gain in momentum and make larger and larger turns until it has acquired enough energy to be shot off towards the moon — much like a shot-putter turning and turning in a widening gyre.

The orbiter module containing the lander will then hurtle towards the moon and hopefully enter moon orbit. Once this is successful, the lander named “Vikram”, after Isro’s founder Vikram Ambalal Sarabhai, will detach and make a soft landing on the moon’s south pole.

If Vikram is able to land successfully on the mon, it will release a rover or moon explorer called Pragyan (Sanskrit for wisdom), which will scuttle around the lunar surface collecting all kinds of data about the minerals and searching for the presence of water. After a fortnight of activity, Pragyan will shut down as its power sources dry up. Before that it would have sent gigabytes of useful data to scientists on earth.

The moon rover will eventually go silent, perhaps it will never reach the moon, who knows? Space buffs would be counting the hours to the lunar touchdown event, which reportedly will have a nail-biting 15 minutes’ finale during which anything could happen.

But reach the moon or not, scratch the surface of the moon or not, the fact remains that Chandrayaan-2 has already succeeded. More valuable than the any data that Pragyan can send down is the generation of Indians who have climbed out of a dark past to emblazon a trail in space. Their achievement will inspire millions more to go where no Indian has been before.