Surprise in Maldives: Road ahead is thorny

Padma Rao Sundarji
The writer is a senior foreign correspondent and the author of Sri Lanka: The New Country

As with all small countries, the Maldives too is being closely scrutinised by a raft of global players. 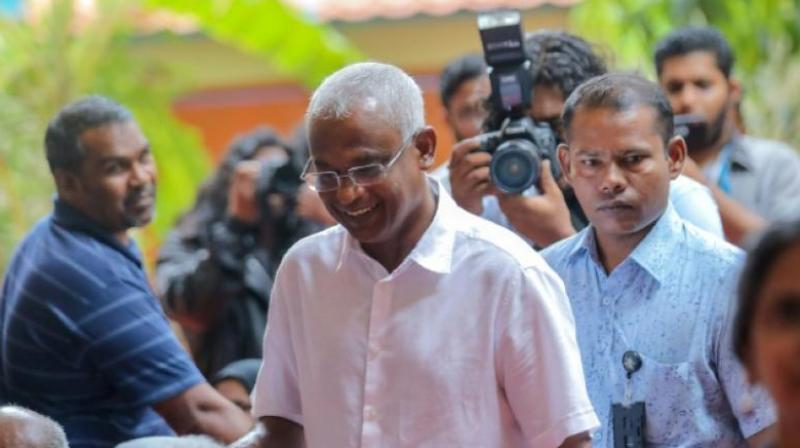 Whether in hijab or bermudas, there’s hardly a Maldivian who doesn’t believe in Jinnis — invisible spooks both good and nasty that can tease the islanders of the beautiful archipelago till they are appeased by a fanditha, an offering.

A day before the presidential elections in the Maldives on Sunday, any voodoo queen worth her chicken claws would have gloomily predicted that the biggest jinni to plague Maldivians in recent times, dictatorial President Abdulla Yameen, would cling to his office. After all, the President had arrested or forced into exile two former Presidents (one his own half-brother), jailed members of the Opposition and judges of the Supreme Court. Rumours of corruption and personal enrichment abounded even as Mr Yameen struck deals with Saudi Arabia and China over entire atolls, encouraged the spread of Riyadh-style Waha’bism and snubbed regional ally India. In a last-ditch effort to flex muscle, Mr Yameen even ordered a police raid upon the office of the Opposition’s candidate, Ibrahim Mohamed “Ibu” Solih, the day before the election.

Whether it was divine intervention or not, Abdulla Yameen was defeated by Mr Solih, and the man said to be a reformer will be sworn in as President in November. Through the sensational election, the gentle and hospitable nationals of the Maldives, who were frequently derided for their seeming submissiveness under Mr Yameen, strutted the stern stuff they are made of.

Meanwhile, it’s silly season on the social media. Indian “pundits” are gloating foolishly over the “defeat of China”, while simplistic Western commentators are equating the departure of Mr Yameen to that of Islamic conservatism (read “fundamentalism”) and hyperventilating that “democracy” has returned to the beautiful coral playgrounds of the global rich (and, in other words, made the country “theirs” again).

Rather uncharitably towards Maldivian voters and yawn-inducingly in India, the Big Brother syndrome has struck our neighbours. South Asian analysts are pinning the election result on their favorite ‘jinni’ — India’s Research and Analysis Wing (RAW).

Whether RAW can really be credited with black magic or not, India got off the mark even before an official announcement by Male’s Election Commission. Prime Minister Narendra Modi, too, peppered his congratulatory phone call to Mr Solih with key words like “democracy” and “peace”. Far from being comatose over events in the Maldives as it has been accused of, South Block had its eyes wide shut all this while.

President-elect “Ibu” Solih is a relative of former President Mohammed Nasheed, a well-liked parliamentarian and co-founder of Mr Nasheed’s Maldivian Democratic Party (MDP). But it’s not going to be smooth sailing in the idyllic country, not even for an experienced administrator like Mr Solih.

The coalition he will have to eke out a government from couldn’t be more disparate. Indeed, it would be well advised to take lessons from neighbouring Sri Lanka, where a similarly motley crue is fighting hard to survive. Much like in Colombo, where the country’s two largest rival parties joined hands merely to oust a former President, the Maldives’ longest-serving head of state, Maumoon Abdul Gayoom, is part of the victorious coalition along with the very man who ended his own rule — the country’s first democratically-elected President, Mohammed Nasheed. Then there is the right-of-centre Jumhooree Party, which envisages liberalism, nationalism and an “Islamic democracy”. Its erstwhile coalition partner, the right-wing Adaalath Party, which helped bring about the defeat of Mr Gayoom in 2013, is also on board. So far, the glue of the euphoria of toppling Mr Yameen is holding. But will the partners see eye-to-eye over governance once the honeymoon is over? Or will the Maldives see a fragmentation of the kind being witnessed in Colombo, where the President and Prime Minister are at loggerheads and governance is in all kinds of knots? Latest reports from Male indicate that President Yameen is pressuring the Election Commission to delay the announcement of the final results and cook up intelligence reports on “flawed” polling. He will certainly try and wiggle out of prosecution for many seamy moves in the coming months. If the new government is in disarray, he may even move in again for the kill.

As with all small countries, the Maldives too is being closely scrutinised by a raft of global players. Western analysts vapidly assume that democracy, even in countries as culturally alien to them as the Maldives, must be a mirror image of their own interpretation of it. Though they will never voice it, Western capitals will confuse conservatism with fundamentalism and expect changes that are myopic from an Asian point of view — that the hijab vanishes, that Islamic teaching is moulded in a manner most suited to Western liberalism, and so on.

Despite the MDP’s own purported closeness to, and the enormous support it has received from Western countries during its struggle in exile, the new Maldivian government must stand firm and respect the democratic rights of all Maldivians, even those who choose a culturally-conservative form of Islam.

And despite all our warts, there are lessons that tiny Maldives could learn from democratic India, home to the world’s third largest Muslim population, whose practice of Islam ranges from conservative to ultra-liberal without anyone in global capitals getting their knickers in a twist and launching pedantic diatribes against New Delhi. India, on its part, can learn from the Maldives the art of classy and stringently eco-conscious island tourism, which in sarkari hands has proved abysmal in Lakshadweep (part of the same volcanic chain as the Maldives), the Andamans and elsewhere.

New Delhi’s lightning speed at greeting Mr Solih’s victory only reinforces the happy impression that South Block is getting increasingly pragmatic about China’s investments in the Indian Ocean region. It would do well for India’s chattering classes to recall that it was under the victorious MDP’s Mohammed Nasheed that China first showed interest in the Maldives, and that it is the sovereign right of any country to invite investment from wherever it likes. But given India’s flawless track record of springing to the Maldives’ rescue whenever invited, Male, in turn, must remember that India is well justified in asking it to ensure that Chinese investment or not, India’s regional and geostrategic interests must be protected.