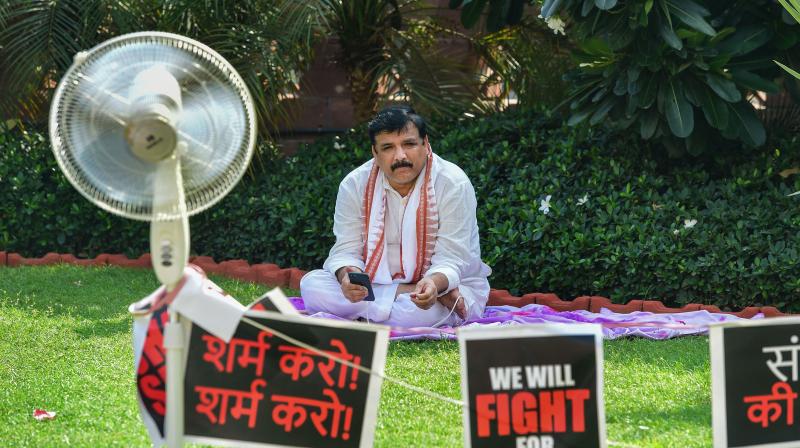 AAP MP Sanjay Singh stages a protest over his suspension from the remaining monsoon session of Parliament over the ruckus created in the Rajya Sabha. (PTI)

For the first time in India, a motion of no-confidence was moved against the deputy chairman of the Rajya Sabha. It’s another matter that it was rejected. To save the two agriculture bills—on which the Prime Minister appears to have staked so much—from possibly falling in the Upper House, Harivansh, the presiding officer, appeared to shabbily disregard the rules, leading to the opposition parties expressing their mistrust in him.

Harivansh stubbornly refused the opposition’s demand for a formal vote to test whether the government actually had a majority to pass the intended legislation. It’s quite clear that to press for a vote is no longer your right even in the Parliament of India. All these years formal voting was permitted the minute any member in either House demanded a division.

On this occasion, however, the deputy chairman chose to impose a voice vote when the House was in turmoil caused by stiff opposition to his ways even by parties that normally vote with the government. The deputy chairman no doubt acted to help the intended legislation sail through on the strength of lung power. It’s clear that if the presiding deity is with you, that’s practically nine-tenths of the law.

These were truly “historic” bills, to quote the PM, in the sense that they will make history. The laws that these will bring about have the intent of deepening capitalism in agriculture by slowly strangulating the long-standing MSP regime — evidently a bad old “socialist” construct — through which the government offers an assured minimum price to farmers to prevent them from going to the wall. The path will be cleared for businessmen to do all the foodgrain procurement to bring farm produce to cities at prices that the market dictates.

The effect of these laws may take time to come to fruition. For the time being, the government has hastily announced even an increase in the MSP to placate farmers who are on the warpath. But when the desired results begin to kick in with the passage of time, Indian agriculture, which has been described as a “gamble on the monsoon”, will also carry the additional feature of being a gamble on the market. The fate of approximately 50 per cent of the population that subsists on agriculture — about 70 million people — will be determined eventually by how the stock market, the money market and the foreign trade market are faring.

Naturally, bedlam ensued of a kind not seen before in the Rajya Sabha. To hide the shame, the live telecast of Rajya Sabha TV was abruptly cut. The microphones of opposition members were switched off. It was a blatant effort to ensure that people do not get to see the methods being deployed on the government’s behalf in Parliament. It was darkness at noon that was on display.

If China or North Korea had a multi-party system and a real Parliament, this is what might have been expected. But they don’t. So that makes us a special category of “democracy”, a foretaste of the New India that is being promised as India ostentatiously lays claim to being the “vishwa guru”.

Before Harivansh announced a voice vote, it seemed that the ruling party’s opponents might just have the upper hand in terms of numbers as some of the government’s regular allies from among the opposition parties were switching sides on this particular vote since it concerned millions of farmers, and they didn’t wish to be seen ranged against the growers of food, whose condition is pitiable at the best of times.

Year after year, we have seen gripping images of farmers casting away the healthiest-looking onions and tomatoes — fruits of their toil — on the roads instead of selling them to traders at ridiculous market-determined prices because the MSP regime does not cover such crops. What if the MSP went and rice and wheat now had to be flung away in the wind by our agriculturists?

A defeat for the government on the agriculture bills in Parliament topping a farmers’ agitation gripping Punjab, Haryana and several other parts of North India would have been a signal event, coming on top of the news of 24 per cent negative rate of growth, the worst among all countries of the world, shooting Covid-19 figures (again the worst in the world), and China sitting on our territory in Ladakh, barely 200 km out of Leh. The looming defeat had to be prevented at any cost, and Harivansh offered his services, although he is not from the BJP-RSS stable.

What is important is that the no-confidence move against the deputy chairman was signed by as many as 12 non-NDA parties, including several that have loyally supported the Narendra Modi government for a long time, behaving as a loyal opposition. These decided to make common cause with the government’s (and the BJP’s) inveterate opponents — the Congress, the Left parties, the RJD and AIADMK, and lately the Trinamul Congress.

The flash unity and loss of faith has come on the heels of the Akali Dal, the BJP’s oldest remaining ally (the Shiv Sena departed last year), withdrawing its cabinet minister from the Modi government. For many years the two parties have had a fairly tense relationship as partners.

What is fundamental to the unusual Akali Dal decision to withdraw from the Union Cabinet north India.

The government is doing its best to head off a nationwide action by farmers by offering unrealistic promises and announcing a hike in MSP for certain crops. But it is clear as day that the continuance of MSP runs against the logic of the two laws cleared by Parliament. Not for a long time in the country have we seen a coming together in protest by a robust constituency even as legislation was in the making. The test of the Opposition will be if it can translate its actions in the legislature with channelling a wide variety of people’s grievances on the ground.