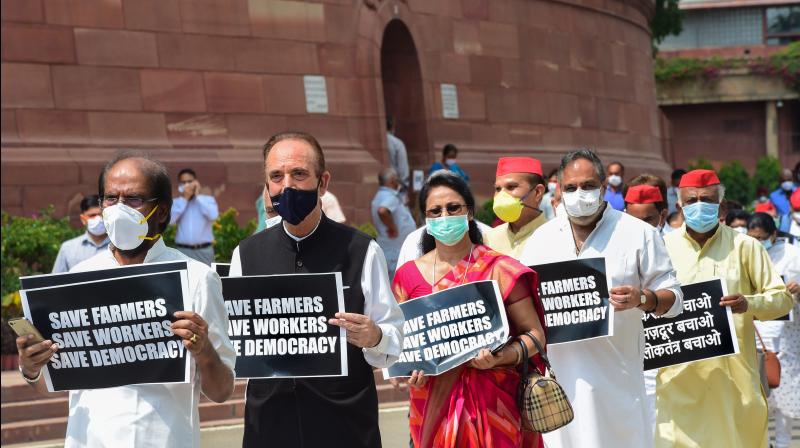 With 303 seats in a House of 540 members, and only 37.36 per cent of the popular vote, the BJP can rush through bills with lightning speed, pummelling any effort at debate. How does this happen? After all 237 members on the opposition benches is not a negligible number.

The BJP’s impatience with the Constitution is obvious but blame also lies with the Gandhi trio on two counts: Neither have they been able to pull together a coalition with any punch, nor have they moved out of the way so that others can.

The salience given to the Gandhis by the media keeps them in the public eye as wishful thinkers with a determination to revive the Congress. This comes across as a massive roadblock in the way of any opposition unity. They know that such a revival is impossible but harping on the belief serves a purpose: It obstructs opposition unity and sustains their relevance to no useful end. The media is content with the simplicity of the Tweedledum versus Tweedledee narrative.

In recent times, a story that has wafted out of the Gandhi enclosure is one of differences between them. Sonia Gandhi, with reliable retainers like Ahmed Patel is averse to rocking any boat. Status quo, uncomfortable though it be, is about the best she sees for the brood in the given circumstances. Her listless politics is also a function of her indifferent health.

Priyanka Gandhi Vadra’s status quoism derives from her personal anxieties, family problems and an inability to cope with responsibilities. Ask Kishori Lal Sharma, appointed years ago to nurse the “family burroughs” of Rae Bareli and Amethi, and he will guardedly spill the beans. The poor fellow’s Stan Hardy (as in Laurel and Hardy) moustache greyed waiting for Priyanka to address the “Congress volunteers”. But Priyanka, like Godot, never showed up.

Rahul Gandhi, meanwhile, is being more assertive about beliefs he has long held and which approximate to the line Rajiv Gandhi enunciated at the 1985 Congress Centenary in Mumbai chastising the “power brokers”. Is Rahul Gandhi looking for that kind of a platform?

In 1969, when his grandmother, Indira Gandhi, split the Congress away from the “power brokers”, the regional satraps, the capitalists were, in a sense exposed. They eventually joined up with the RSS, Socialists in the Bihar movement of 1974 under the leadership of arch-Gandhian Jayaprakash Narayan.

The 1969 split had a Left-Right dimension to it because it was in the context of the Cold War. In the post Cold War world “Inequality” has emerged as the principal affliction of democracies where people’s demands are dismissed as “populism”. Crony capitalism thrives but no political party is allowed to find its feet if it intends to harness the discontent of the people who have borne the brunt of, say, the extended lockdown in India. There is a huge Left-of-Centre space for the Opposition to occupy. It does not have to be terribly ideological. All it has to do is to make available to the people social benefits such as health, education, housing, et cetera. Surely Rahul is aware of this opening.

Politics these days is at a standstill because of the lockdown, of course, but also because of what I call the “Eulalie” syndrome. This light-hearted diversion comes from Wodehouse. The resourceful Jeeves has come to the assistance of his master, Bertie Wooster, at a particularly challenging moment. Roderick Spode, the Earl of Sidcup, has become a permanent social menace in a country house which is Bertie’s favourite haunt. How to cut down Spode’s bombast? That is Bertie’s challenge. Jeeves provides the panacea. Bertie has to sneak upto Spode and whisper, “I know all about Eulalie.” Bertie follows Jeeves’ advice. The result is electric. Spode becomes white as a sheet and collapses in the chair like a deflated balloon. It turns out that before Spode began to float in London’s high society, he owned a store called Eulalie which sold lingerie known for its bras with bold designs. Eulalie, then, is harmless blackmail. But the blackmail which has become the staple in contemporary politics is brutal.

After the BJP’s stunning victory in UP in 2017, the opposition, armed with data on electoral fraud, sought Sonia Gandhi’s permission to hold a press conference. She refused to get involved in “controversies”. Likewise, she backed away from “snoopgate” which had both Modi and Amit Shah in difficulties.

Take a look at Lucknow. Jockeying has begun for the 10 Rajya Sabha seats from UP. Conventional wisdom concedes eight to the BJP and one to the SP. One would have expected the opposition to jointly keep the BJP out on the solitary remaining seat. But individual party leaders are in an almighty state of funk just in case the Enforcement Directorate comes knocking at their door.

Even though the opposition has a comfortable majority in the UP Upper House, the BJP rammed through nearly a hundred bills without any vote. A petrified Akhilesh Yadav is hiding behind columns to avoid political leaders who are pressing him to approach the Supreme Court. What if Yogi Adityanath sets the dogs on him? In fact, Lucknow would appear to have been a rehearsal for the real show in Parliament.

In uniformed cities like New Delhi these examples of the ruling party’s impunity, away from the media’s critical glare, enhance an impression of the BJP’s invincibility. Forgotten are dismal economic figures and a simple catalogue: the party is not in power in Kerala, Tamil Nadu, Andhra Pradesh, Telangana, Maharashtra, Rajasthan, Odisha, West Bengal, Punjab, Chhattisgarh, Jharkhand and Delhi. Just as your eye settles on these facts, India Today thrusts before you its poll results: Modi’s approval ratings are 78 per cent. Like the Priest in Kurosawa’s Rashomon, you walk away nodding your head, “What is the truth?” The climax, of course, is the audacity of ramming through bills in Parliament. Slowly what is being brought into focus is a need for a new Constitution.