The poet in him told him that all this was passing, a shadow play, a fleeting moment in the grand canvas of time 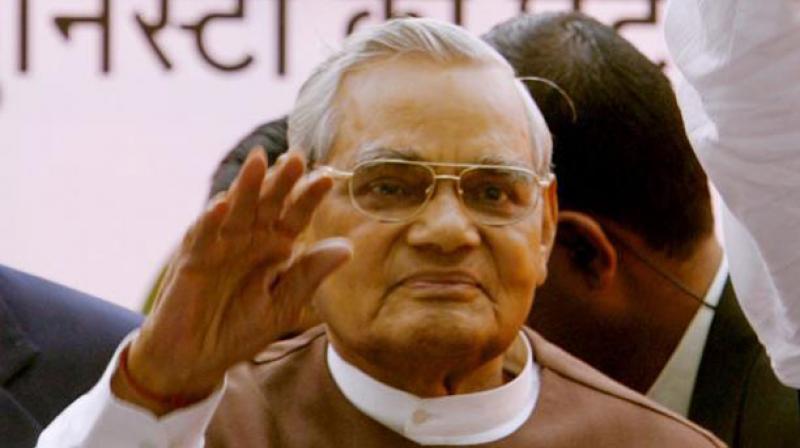 There is a new nostalgia for Atal Behari Vajpayee, whose birthday fell two days ago, coinciding with Christmas. Shakti Sinha’s book on Atalji is out. Vinay Sitapati has written another one on the ‘jugalbandi’ between Atalji and Shri L.K. Advani. Sagarika Ghosh is finishing a book on him. What explains this renewed spurt of interest in the former Prime Minister?

Not everybody has to agree with everything he believed in, or support him politically, but there will be very few who will disagree with the assessment that Atal Behari Vajpayee was a very likeable human being. Although a product of the RSS, and, therefore, supportive of its wider worldview, he somehow managed to retain an individuality that refused to be straitjacketed in mindless ideological terms. That is why, his relationship with the RSS was often strained.

The thing about Atalji was that he was in politics but not — as with the current crop of BJP leaders — entirely limited by it. In that sense, he was both a participant in the paraphernalia of power, and transcendent of it. There was not a whiff of bigotry in his thinking. His spirit was eclectic, his patriotism transparent, and his worldview suffused with a rare idealism. But, in all of this, there was always that irrepressible humour. Once his foster daughter, Namita, told me that Baapji — as Atalji was fondly called — told her that it would be nice if I could write some of his written speeches. “But, perhaps, Pavanji is annoyed with my party,” Atalji said. “Please tell him,” he quickly quipped, “I am not happy with my party either!”

This disarming humour was reflective of a person who carried the burdens and pageantry of office lightly. The poet in him told him that all this was passing, a shadow play, a fleeting moment in the grand canvas of time. Behind it, ultimately, there was a loneliness that prompted a spontaneous sense of detachment, a virakti, a deliberate denial of ownership. It was this interplay between the participant, forever in battle for what he believed was right, and the observer, perpetually aware that for all the sound and fury, this was part of the overpowering transience of all human endeavour, that made Atalji the man he was. Only he, therefore, at the pinnacle of power could confess: “Sometimes I am overcome by the urge to leave it all behind and lose myself in books, writing and thought. But I have been unable to do that. I have lived over seven decades in this dilemma, and what is left of my life will probably be spent no differently.”

I still remember that memorable evening, when I met Atalji at the PM’s residence and he asked me if I would translate his poems into English. However, I put a condition, which was an audacious thing for a junior joint secretary in the MEA to do, for the request was from no one less than the PM. But, the greatness of Atalji was that he was talking to me then not as the PM of India, but as a poet, and I was responding not as a bureaucrat, but as a writer. I said that I would like to translate his personal poetry, those that he had written not from the pedestal of a politician but from his heart, as one aware of the mortality of life, and not his political poetry. It was his humility, as always accompanied by that remarkable twinkle in his eyes, that he readily agreed.

Atalji was not an insecure person. He was willing to respond to criticism, but was not afraid of it, or did not wish to suppress it. A leading TV anchor once told me that, after Atalji had recorded a show with him, he said — as he was leaving: “I am not happy with you. Come and see me at the PM’s residence.” The anchor was apprehensive, afraid that, perhaps, he had been too aggressive, and had asked the wrong question. When he went to see the PM, this is what Atalji said: “I said I am unhappy with you because you gave me much too easy a time. You did not ask the tough questions.” Contrast this with how sensitive the BJP has become today to all questions that are remotely critical, dubbing all those who ask them as “anti-national”. Our PM today does not even meet the press in a direct interaction, leave alone feeling unhappy that he was not asked an uncomfortable question.

The absence of insecurity facilitates honesty. Nothing brings this out more vividly then Atalji’s poetry. For instance, a man who led the BJP campaign in 2004 on the slogan of “India Shining”, was the same man who had the honesty to write:

Dharmaraj has not overcome

His addiction to dice.

Draupadi is robbed of her honour.

The Mahabharata will be fought,

No matter who claims the throne,

The poor will continue to suffer.

Never place me so high

That I cannot embrace

Those who are not my own.