The images went viral, with anti-Islam blogs sharing the photographs as proof of the callousness of Muslims. 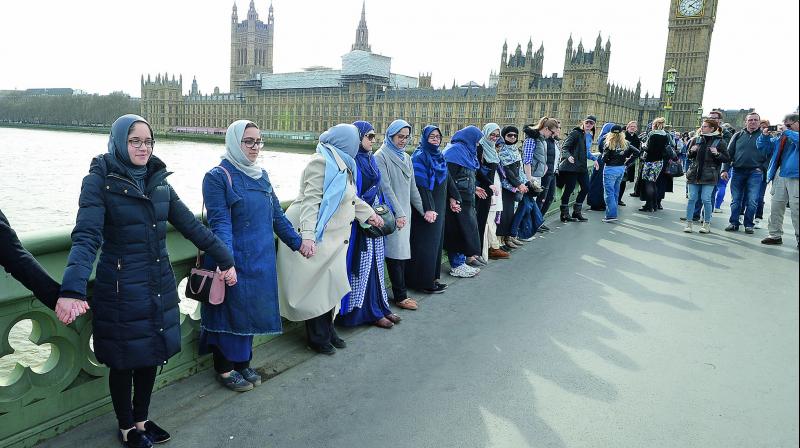 A group of women link hands on Westminster Bridge in central London on Sunday in an act of solidarity organised by Women’s March London to pay tribute to the victims of the Westminster attack. (Photo: AP)

Karachi: Moments after the attack on Westminster Bridge, a woman was photographed walking past a small group of people attending to an injured victim. In sequential images, she looks past the victim, and then down at her phone. Her hand cradles her face. She is wearing a hijab.

The images went viral, with anti-Islam blogs sharing the photographs as proof of the callousness of Muslims. Some sites compared the image of the woman glancing at her phone with that of an MP performing CPR on a victim to highlight the “main difference between Muslims and Christians”. The online abuse mounted to the extent that the photographer issued a clarifying statement emphasising that the woman was clearly distraught. The woman then approached Tell Mama, an advocacy group that monitors anti-Muslim incidents in the UK, to circulate a statement on her behalf in which she reiterates that she was devastated by the attack and speaks out against the viral campaign.

This woman’s experience neatly summarises the flawed Western response to terrorist attacks. Each incident has become an excuse to shore up a narrative that isn’t actually true. According to the consensus narrative, immigrants are flooding the West and carrying out terrorist attacks because they hate Judeo-Christian values, democracy and Western freedoms. This was the narrative assigned to Khalid Masood until he was revealed to be Adrian Elms, a 52-year-old born in Kent with a history of violent crime, and a late-life conversion to Islam, indicating that longstanding mental and social issues rather than exposure to the faith may have driven his actions on March 22.

Elms’ profile is typical of many attackers in the West, who tend to be natives of the country in which they act, often live within an hour’s distance of the attack location, and have a history of petty or serious criminal activity. But who needs facts when there’s a more compelling narrative that can be peddled for cynical political purposes? As Nesrine Malik put it in the Guardian, “an infrastructure of hate promotion has been established and incorporated within the mainstream”. This is exemplified by Nigel Farage’s immigrant-bashing hours after the Westminster attack, and Donald Trump Jr’s attempts to criticise London mayor Sadiq Khan after this attack for sensible comments he made last year about terrorist incidents being a part of life in major cities. These narratives have enabled political coups ranging from Brexit to Trump to Le Pen.

As attacks in western cities increase, people will cling more desperately to the established narrative, no matter how often it is disproved. This is because it is too terrifying to contemplate a world in which everyday objects like knives and cars can be weaponised by anyone who bears a grudge, had a difficult or abusive childhood, or struggles with addiction.

Public debate about violent extremism in the West has long made the mistake of treating radicalisation as a product of demography rather than biography. The assumption is that radicalised individuals must fit a particular type: Muslim, male, young, immigrant, unemployed, internet-savvy. But we have repeatedly seen that these stereotypes don’t hold true, and that it remains unclear what causes someone to become radicalised and take the step of committing an  extremist act. In most cases, perpetrators have histories like Masood’s, rooted in personal experiences, traumas and failures, that are harder to generalise, typify and predict. More importantly, individual experience is harder to convert into sweeping policies or regulations than stereotype.

Since the launch of Raddul Fasaad, the security forces in Pakistan have increasingly resorted to demography, arresting Afghans and Pakhtuns, and stirring ethnic resentment. It is true that generalisations about the types of people who join violent extremist organisations may work better in a context like ours where militant groups are prevalent, operate openly, run social welfare programmes, and have at some point benefitted from state patronage. When we resort to generalisations, we are not blurring the boundaries between demography and biography; rather, we are denying the roots of violent extremism, which is largely the consequence of strategic policies gone awry, and not an organic process.

In either case, the failure to acknowledge the drivers of extremist violence in a particular context means that publics and politicians rely on ill-conceived narratives that ultimately cause more societal damage, rather than address the underlying issues that could help stem radicalisation. Irrespective of where terrorism takes place, it should not be exploited for short-term political gain — we owe at least that much to its victims.