Aakar Patel: Covid-19 has blown away all our fig leaves

Aakar Patel: Covid-19 has blown away all our fig leaves 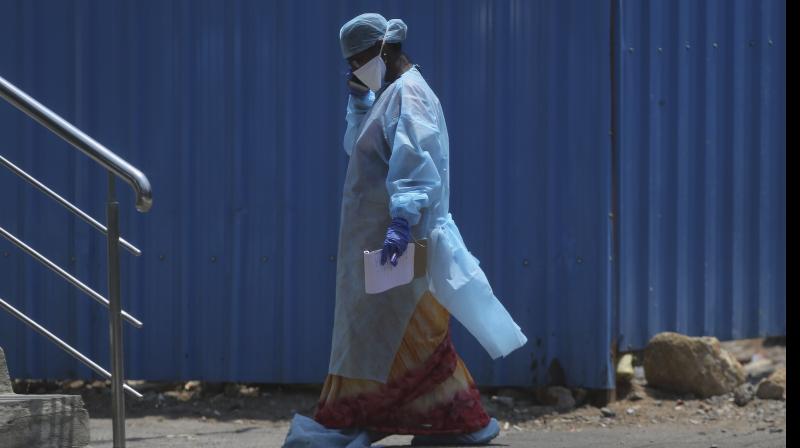 A health worker walks inside a containment zone to collect details during lockdown to prevent the spread of new coronavirus in Hyderabad. AP Photo

Our good and bad qualities as a nation and as a people, the shortcomings and peculiarities of our culture, the incompetence of our government and state, all of these are being exposed by Covid-19. We are facing as a species the same problem across the world -- a disease with no cure, whose spread can only be slowed by individual cooperation, and whose worst-affected victims can only be saved by a well-equipped healthcare infrastructure.

This is of course something that India does not have. We are a poor nation, with a per person income that is 30 times less than in developed nations, with a life expectancy over 10 years less than developed nations and yet we spend less as a percentage of GDP on healthcare than they do.

So, it is our fault as a democracy that we have tolerated such a lack of focus on the population’s health, and we will pay for it the longer this plague continues. There are real consequences to not having more intensive care unit beds and ventilators and trained staff, and we will see them soon and some of us who are reading these words (and writing them) will feel those consequences.

Who can we blame for the fact that our Central government spends five times more on defence than on health? We should blame ourselves and not those we elect. But we can blame our government for incompetence, and that is the second thing that is being exposed and will continue be exposed. This holds true for both the Centre and the states because very little thinking goes into our decision-making as this period is making clear.

The Centre does not really have much of a governance function other than to send orders. But even the sending down of orders it cannot do properly. It made a law that would send business owners to jail if there was a violation of Covid-19 protocols in their factories and offices. How would it be determined whether a worker got infected at work or at home? How would it be known whether it was due to carelessness or misfortune? How would it be known that the fault was that of the business owner? None of this was thought through when the order was approved and passed.

When the details became known, a junior minister was sent to clarify that this law was now being altered. It is not a small matter. It shows the government is not thinking about how we are going to reopen this lockdown.

At the level of the states, where governance actually happens, there is no real governance. In the state I live, the government decided to transfer over 100 undertrials, some of them Covid positive, to a jail in a part of the state which was a green zone (meaning that till then it had no Covid cases). This created an uproar and was a scandal. The government had not thought about this, and so had to bring these people back in another convoy, again risking the spread.
Such stories are common throughout this country and these things will continue to happen.

The last thing that will be exposed is us -- me and you and all of us as a culture. Covid’s spread can only be halted successfully if we maintain discipline. Wearing a mask so that we protect others, washing our hands to protect ourselves, going out only if necessary and not exposing others to danger. And this must happen here, in India, where already the rich are bribing their way to holidays and picnics, where governments are being pulled down and victory rallies being held, where curfew passes are being duplicated and faked so that people can move around.

In the United States, which is suffering far more than we are at the moment, there is also a lockdown but it is different from ours. Shops and offices and schools are closed, but there is no ban on the movement of people. The government expects that its guidelines on social distancing will be followed by the population for their own safety. There is no curfew being enforced by the police in the US, unlike in India, because it is not required.

In India, the government believes the only way to make people behave, even when their own safety is under threat, is through the danda. What does that say about you and me and about our culture? That is what is being exposed in this period.

I have not touched upon our prejudices and our bigotry which have become so pronounced and so obvious to the world that the Prime Minister and the external affairs minister had to telephone the Gulf leaders last week to walk back the comments of some BJP legislators and expatriate Indians against Muslims and Islam.

Many things about us are being exposed because of Covid-19 and will continue to be exposed. What a strange, amazing and terrifying time it is for us to be alive and be observers of what is happening around us.