Opinion   Columnists  28 May 2021  Farrukh Dhondy | Does UK have ‘institutional racism’? The debate still on
Opinion, Columnists

Farrukh Dhondy | Does UK have ‘institutional racism’? The debate still on

In all the ups and downs and instances of that episode, it was never pointed out that 13 current Labour MPs are Muslims 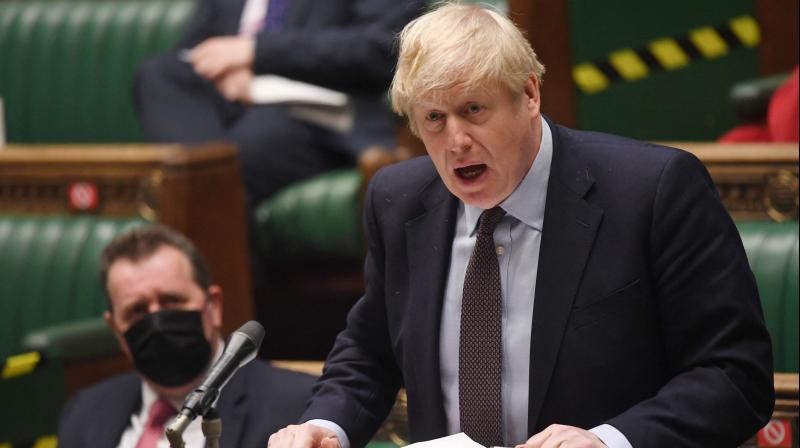 BoJo was sanctioned for columns he wrote in the Daily Telegraph likening Muslim ladies wearing burqas to letter boxes with round tops and slits below and then to Balaclavaed bank robbers. (Jessica TAYLOR / various sources / AFP)

“If all the world’s a stage

Then most of us are bit part players

Even fewer the dragon slayers.

With no audience for our drama

The script scribbled on destiny’s pages

The vale of sorrow’s panorama… “

From Innocent Ney Ignorent by Bachchoo

Some attitudes here become platitudes and breed enquiries to look into them. Months ago, the UK government received the report on “institutional racism” throughout the British body politic. It concluded that there was room for reform in attitudes and workings of certain sectors but there was no organ of the State that could be labelled as institutionally racist.

Commentators who claimed that non-white people were subject to systematic discrimination called the report a “whitewash”, even though almost all its authors were either black or Asian.

In October 2020, the Equality and Human Rights Commission published a report on anti-Semitism in the Labour Party, focusing on the period of the leadership of Jeremy Corbyn. It concluded that there was endemic anti-Semitism and Keir Starmer, who succeeded Mr Corbyn as the party leader, apologised for it and promised to stamp it out.

This week, following a relentless pursuit of the allegation by a former chairman of the Conservative Party, Baroness Warsi, a government commissioned report on Islamophobia in the party has been published. It was Sajid Javid, who as the home secretary debating Michael Gove and Boris Johnson on television in the party’s last leadership election, had bounced the other candidates into agreeing to such an investigation. They couldn’t very well publicly object.

The report, commissioned last July, was headed by Prof. Swaran Singh, a former Equality and Human Rights Commissioner. It concluded that there was no “institutional racism” in the party but there were incidents of councils, formal bodies and individual members manifesting some form of prejudice against Muslims.

The headline-catchers in the reports were the strictures against Boris Johnson himself and against another prominent Tory, Zac Goldsmith. BoJo was sanctioned for columns he wrote in the Daily Telegraph likening Muslim ladies wearing burqas to letter boxes with round tops and slits below and then to Balaclavaed bank robbers. He has since apologised not for what he regarded as a callous joke, but for “any offence it may have caused”.

Zac Goldsmith, who stood as the Tory candidate for mayor of London against Labour’s Sadiq Khan, made oblique allusions to Sadiq being a possible sympathiser of the Islamicist who had carried out terror attacks in London. These allusions were clear in their snide implications, though carefully delivered and of a nudge-nudge-wink-wink composition, so as not to incur heavy libel charges. Zac lost, but Prof. Singh’s report treated this aspect of his campaign as evidence of Islamophobia at the top of the Tory Party. BoJo was rewarded not because of but in spite of his callous insult with the leadership of the party and consequently the keys to what his fiancé, “Carey Antoinette”, regards as the shabby dwelling at No. 10. Zac Goldsmith, for no tangible achievement, was promoted to the Lords.

The report has been labelled a “whitewash” -- the word is very popular in the UK -- by Baroness Sayeeda Warsi and by leaders of several Muslim organisations.

Lady Warsi said that the party’s “processes, attitudes and behaviour” were at fault from its leadership to its grassroots… “On each of those counts it satisfies the definition of institutional racism … the way I see it, if it looks like institutional racism, feels like institutional racism, fits the definition of institutional racism, then I’m afraid it is institutional racism.” With these views, why does this daughter of a Pakistani immigrant family remain in the Tory Party and occupy prestigious positions within it? Perhaps she wants to remain inside and fight passionately for Tory policies on immigration, taxation, cuts to foreign aid, bungles over Covid-19 lockdowns, which have caused the deaths of more per population than any other country etc. These Tory policies and acts may cause discrimination, devastation, disease, desperation and death, but so what? She’ll stick with the Tories and be a baroness and fight with all her might against ill-thought-out, frivolous “jokes” about burqas and post-boxes.

Though I haven’t read Prof. Singh’s report, none of the commentary I have read on it mentions that it makes a distinction between remarks about Islamicist terror acts and blatant remarks about people who follow the faith. The majority of Muslims don’t support the Islamicist murderous contentions and condemn them as un-Islamic. Very many Muslims assert that there is no sanction in the Quran for the burqa or the niqab or even for the hijab, as God’s word only enjoins women to be modest.

In the dispute about anti-Semitism in the Labour Party, Jeremy Corbyn and his associates attempted to make a clear distinction between the criticism and condemnation of Zionism and the actions of the Israeli government against the Palestinians and hate language and actions against Jews. Yes, there is a distinction, and it ought to be clearly made.

In all the ups and downs and instances of that episode, it was never pointed out that 13 current Labour MPs are Muslims elected by large numbers of Muslim immigrants. Three of these MPs have been accused of or disciplined for blatant anti-Semitism and there are no statistics available on the attitude of their Muslim constituents towards Jews. Perhaps the Labour Party should institute an enquiry into precisely that?