Shreya Sen-Handley
Shreya Sen-Handley is the author of the award-winning 'Memoirs of My Body', short story collection 'Strange', and new travelogue 'Handle With Care', and a columnist and playwright. Her Twitter and Insta handle is @shreyasenhan. 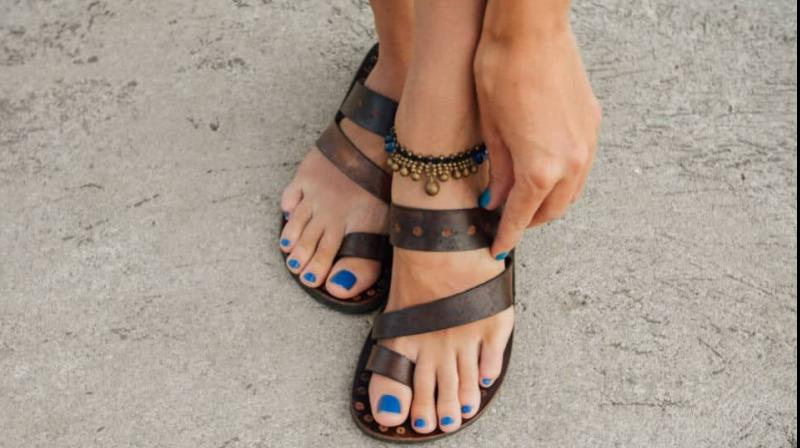 I padded about happily on my naked-as-the-day-they-were-born feet, as if on a sunny beach, and felt an incredible sense of freedom that no censorious glance could stymie. (Representational Image/ By Arrangement)

“Oh no!” was my first reaction to a favourite pair of Indian sandals giving up the ghost, with both straps irrevocably snapping, while I was out this weekend. But it was soon overtaken by laughter at its absurdity — that with no time to return home to replace malfunctioning footwear before the film we’d booked started, I would have to walk barefoot through our straightlaced British city.

So, I padded about happily on my naked-as-the-day-they-were-born feet, as if on a sunny beach, and felt an incredible sense of freedom that no censorious glance could stymie. That it was a sunny day, and the British a discreet race, practiced at looking away, helped. Most of all, this sense of liberation in what might be considered a loss, and an awkward one, came from two crucial sources: being in the middle of both my loving family and that sub-chalta-he life stage!

Twenty years ago, I don’t think I would have been as happy a loser. Or “looser”, as people persistently misspell it! But the popular mangling of this word might even have a point. When I’m losing things, whether accoutrements, bearings, or marbles, I am indeed looser than I’ve ever been —chilled, laidback, almost revelling in it!

This didn’t happen overnight however, as I’ve been in training to be a laidback loser, or “looser”, since my itinerant childhood. Rushing from one way of life to another for much of your existence readies you for this unencumbered state of mind. Returning to Kolkata from Manila in my pre-teens was far from bloodless; I’d lost my home, school, closest friends, favourite haunts, and a city I identified with. But I was also learning to accept loss as a part of life. Escaping into books found in a dusty trunk in our old Kolkata flat, rebelliously tucking into my tiffin on the back benches at school while teachers droned on, I would softly chant, for my hearing alone, lines from R.E.M’s Losing My Religion, “But that was just a dream… just a dream.”

Yet, just because I wished it away didn’t mean defeat left me alone. Over the years, I mislaid lovers, husbands, good health, opportunities promised and snatched away, and more places I called home, but worst of all, I lost beloved friends and family. My coming to terms with these misfortunes took the form of humorous musings in my books and columns.

Not everyone is a happy “looser” though, rarely successful sportsmen. An amiable man nowadays, who can forget tennis icon John McEnroe in his prime, enraged by the referees’ (mis)judgements? Novak Djokovic is now the byword for losing badly, with a sense of entitlement out of proportion to even his many achievements. As for the Australian cricket team, the Baggy Greens, with their tantrums and gamesmanship, there’s neither anything very green about their bad-tempered stomping, nor are they baggy enough to be accommodating of life’s innumerable twists. Unlike them, the less entitled average human learns to laugh in the face of adversity, and even celebrate it.

Diagnosed with cancer last year, my cousin has just completed eviscerating rounds of chemotherapy. Seeing her for the first time after this, without her eyebrows and hair, I was momentarily at a loss with how to address it, till my cousin merrily told us that her attempt at drawing eyebrows back on had left her looking like an Angry Birds character, and we all dissolved into laughter. Mirth became the motif for the rest of our conversation, and I came away with the impression that she’d not only learnt to laugh at this injustice, but had even embraced it.

Of course, the decision to laugh about loss has to come from the person who’s suffered it, and not from the onlooker, which would change the tenor of the laughter altogether from life-affirming to abusive. While refusing to be drawn into social media gasbagging over the kerfuffle between Hollywood stars Chris Rock and Will Smith, I haven’t wavered from my opinion that the violence was the worst of it, but there are lessons to be learnt as well from the incident about other people’s hardships and approaching these with respect. The chattering classes might also want to stop using the word “roast” willy-nilly, if they want to respect language… but oh, what am I saying?

One of my television colleagues had a nervous reaction to death, rolling in the aisles at funerals till he was banned from attending them! Gallows humour, if it can be called that, is obviously only acceptable from the victims themselves. Had anyone other than Sydney Carton, the hangman, for example, uttered the words, “It is a far, far better thing that I do, than I have ever done…” in the concluding scene of Dickens’ A Tale of Two Cities, it would not have seemed as poetic.

There are clearly boundaries around loss, and a sticking point on the magnitude meter, after which loss no longer feels like liberation, but calamitous. Yet, with Elizabeth Bishop I agree, that the little things we can learn to lose with equanimity:

“The art of losing isn’t hard to master;
so many things seem filled with the intent
to be lost, that their loss is no disaster…”

So, let sandals snap and house keys hide, false friends fall away and gossip abide, we can stride on, barefoot on cold British roads, or over hot coals, insouciant and smiling, can’t we?