Several questions arise in the context of the ongoing Russia-Ukraine war. Is Russia too big to sustain itself on its own steam? 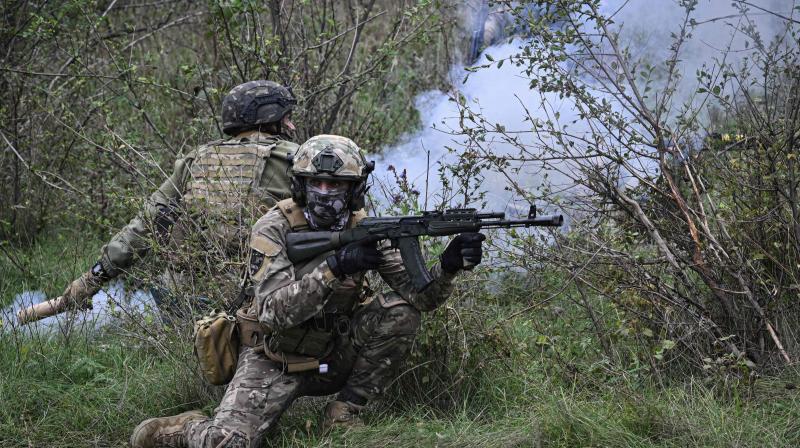 Servicemen of a territorial defence unit train during an exercise in Kryvyj Rih on September 28, 2022, amid the Russia invasion of Ukraine. (Photo by Genya SAVILOV / AFP)

Scanning historical atlases of world geography’s changing/changed cartography of various countries of different shape/size in different eras, one wonders how Moscow managed its long, uninterrupted and un-changed gigantic political geography up to 1991!

Several questions arise in the context of the ongoing Russia-Ukraine war. Is Russia too big to sustain itself on its own steam? Or, is it too big to be tolerated, and is hence preyed upon, by smaller Western nations? They can feel an existential threat simply with a glance at the map -- spanning from the Bering Sea at North America’s edge, straddling across the whole of the vast Euro-Asian space, jutting into the landlocked Balkan and Baltic Sea shore of Europe’s heartland, and further bulging below the belly towards the south, as if about to barge into the crowded Levant and the former Ottoman empire’s backyard, through the Black Sea?

Step back just two centuries to Napoleon’s 1812 Moscow invasion which turned into a retreat due to the harsh winter and food shortages, leading ultimately to a rout. Europe was awed as the Russian army advanced to the West, and French crowds prudently shouted “Vive l’empereur Alexandre” (Long live Emperor Alexander) as the Czar entered Paris.

This ignominious French defeat at the hands of the Slav from East thus created a psychological flutter which persists to this day. That, in spite of the West being superior to the East, how did the latter trump the former?

Fast forward to the twentieth century, as Hitler’s propaganda machinery tried to whip up a campaign of racial hatred before his 1941 invasion of Russia -- of “pure” Aryan blood versus the “impure” Slavs of the East. Thus, Hitler’s “extermination” directive to his generals and marshals in the eastern theatre: “In war with (Russian) Bolshevism, handling the enemy according to humane rules or the principles of international law isn’t applicable”. Professional soldiers were injected with hatred of racial superiority: “It’s the old battle of Germans against Slavs, of defence of European culture against Muscovite-Asiatic inundation”. All this, mind you, despite the validity of the 10-year August 23, 1939 Berlin-Moscow Non-Aggression Pact signed by the two foreign ministers -- Ribbentrop for Germany and Molotov for Russia.

The Second World War thus became the greatest example of a repulsive race war, which once again showed an “inferior” but victorious Slav leader inside the “superior” but vanquished Germany’s city of Potsdam, where from July 17 to August 2, 1945 the Big Three met -- the Anglo-Saxon duo of Winston Churchill and Franklin D. Roosevelt and Josef Stalin from Moscow – to decide the future of Germany and post-war Europe, ending with the Potsdam Agreement.

On both occasions -- in 19th century Napoleonic time and in the 20th century after Hitler’s war – the “inferior” Slavs from Moscow had the last laugh as Europe’s future was decided by three “outsiders”. That surely rankles in the psyche of the West, which has again embarked on a virtual 21st century race war through mainland Europe.

Why does it feel that the ongoing Russia-Ukraine conflict is like a “race war”? Because of the way most of the West, particularly in Europe, is trying to punish all Russians for the present conflict, treating them as belligerent. What else is the rationale for trying to deny entry to and barring the movement of almost every Russian tourist in the West, may be the world? Mercifully, at least the Australians are behaving sensibly, as their defence minister Richard Marles has categorically ruled out the barring of Russian tourists as part of the Western sanctions.

What stands out today in the sudden turn of the tide against Moscow’s forces, is that neutral or non-aligned capitals like New Delhi and Beijing are counselling restraint. The race war of the past could turn into a race for the restoration of peace.

For Moscow, however, it may be difficult to apply the brakes suddenly to its political objectives as that would give leverage to its adversaries at the high table. The post-Second World War West has always abhorred inter-state conflict on its soil. It’s an extraordinary dilemma internally too as the Kremlin’s latest troop mobilisation order has created ripples. War or no war? The UN could have been brought into play had a veto-wielding Security Council permanent member not been involved. But that option is out, and the world is on edge.

Understandably, a strong nation with strong military shouldn’t disturb the hard-earned peace and prosperity of the globalised, inter-connected developed world. The Russia-Ukraine conflict is doing precisely what the West dreads. From power, food, fuel, fertiliser, gas, grain, trade, commerce and communications to industrial production, all are under dire stress, which threatens the path towards growth, and is thus the single most important factor cementing its unity, notwithstanding the inherent fragility. One can only hope that both Russia, and Europe, today don’t fall victim to a new race war.

In this context, and even away from the West, one should ponder some questions about the type-casting of entire populations or nationalities. Can all Hindus be branded “casteist”? Are all Muslims “communal” or have links with ISIS or Al-Qaeda? Can all English-speaking white Christians be accused of a “coloured” vision on the non-white, non-Christians of the underdeveloped or developing Third World?

The West needs to check its cacophony over the “impending collapse” or “break-up of Russia like 1991”, and the fall or demise of its leader. It’s undeniable that Ukraine’s past is deeply linked with the East, not the West. Kyiv is indeed the cradle of Russia’s history and culture. Hence, Moscow’s combatants must slow down to mend the fractured fraternity of its own mighty Eurasian heartland to benefit all sides.