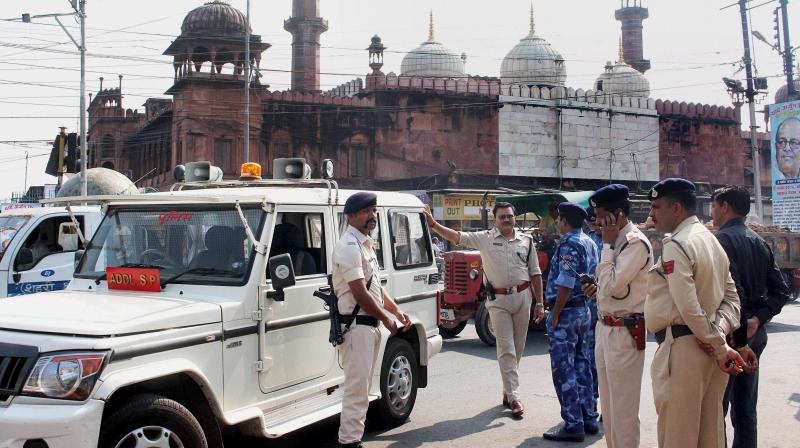 Heavy police force deployment as security has been beefed up in wake of SIMI operatives encounter in Bhopal. (Photo: PTI/File)

The disease of “encounters”, or extra-judicial killings, by members of the police, security or armed forces is at least half a century old, but has now assumed epidemic proportions. In Madhya Pradesh, Chhattisgarh and Jharkhand, the police have been on the rampage.

A report by the National Human Rights Commission of India states that half of the 2,560 police encounters reported between 1993 and 2009 were found to be false. Action was not taken against approximately 85 per cent of the culprits.

On October 31, 2016, a barbaric encounter was witnessed in Bhopal, capital of Madhya Pradesh. Incarcerated at the high-security Bhopal Central Jail, eight alleged members of the Students Islamic Movement of India (SIMI) were said to have escaped by slitting the head constable’s throat (allegedly with an eating utensil), and climbing a parapet wall some nine metres high using bedsheets and ropes before climbing two more walls. It is claimed they walked at least six kilometres.

They were standing on a hillock with no escape route when the police surrounded them. Videos that later surfaced showed five of the men waving to the police, apparently trying to signal their intention to surrender.

Three days after the encounter, audio clips of the conversations between policemen at the scene emerged that seemingly indicate that they had orders to kill. How did things come to such a pass?

Ravi Nair, an internationally respected human rights activist and director of the South Asian Human Rights Documentation Centre in New Delhi, recalls inquiries held 40 years ago and concludes that six factors account for the spread of encounters: the state’s failure to ensure prompt and fair investigations; its failure to prosecute known culprits; inefficiency and dilatoriness of India’s creaking judicial system; unaccountability to the law of the police, security and armed forces; and indifference bordering on connivance to encounters.

India’s Supreme Court is not blameless. In 2009, the Andhra Pradesh high court held: “If a person goes with a gun to kill another, the intended victim is entitled to act in self-defence and if he so acts, there is no right in the former to kill him in order to prevent him from acting in self-defence.”

It held that, “where a police officer causes the death of a person acting or purporting to act in discharge of official duties or in self-defence as the case may be, the first information relating to such circumstance shall be recorded and registered as a first information report (FIR)”.

The Supreme Court promptly stayed this judgment on an appeal from the Andhra Pradesh Police Officers Association and has kept it pending all these years.

In 2014, another bench laid down 16 guidelines to be followed in investigating police encounters resulting in death.

The number of encounter cases has gone up from 90,946 in 2008-09 to 105,664 in 2005-16. In a detailed expose in Frontline (November 25, 2016), Divya Trivedi reported: “Statistics released by the National Crime Records Bureau (NCRB) for 2015 show that Muslims constituted a greater share in the prison population than any other segment of people. While their share in India’s population as per Census 2011 was 14.2 per cent, their proportion in the undertrial prison population stood at 20.9 per cent.” The percentage of convicted Muslims was 15.8 per cent. The percentage of Muslims among detainees was also high at 23.8 per cent. In fact, they fared as badly as dalits and the tribal people. Together, these three communities constituted 39 per cent of the population but accounted for more than 55 per cent of all undertrials and 50.4 per cent of all convicts.”

Encounter cases increased in Gujarat after the pogrom against Muslims in 2002. Harsh Mander, a highly respected activist, filed a petition challenging the discharge of Narendra Modi’s confidant, Amit Shah, in the famous Sohrabuddin encounter case in Gujarat. An unprecedented number of 32 police officers, including six from the Indian Police Service, were jailed for cold-blooded killings in Gujarat. Predictably, Indian Kashmir tops the list. Encounters staged outside are coupled with custodial killings inside prisons.

The clime fosters the crime. Both a former chief minister of Uttar Pradesh and the former Shiv Sena boss, late Bal Thackeray, approved of encounters.

Bollywood reflects social attitudes and, in turn, shapes them. It has lionised police officials who stage encounters. In two films, the hero, an inspector in charge of a police station, killed the villain who was a don. In both cases, he had the support of his colleagues. In both, they lied to the media about the cause of the deaths. The hero is a high-priced star. Small wonder, then, that encounters are not censured. There is no popular censure. People complain of delays in court and incompetence by the police.