If the BJP survives in power, it may not need the RSS much longer 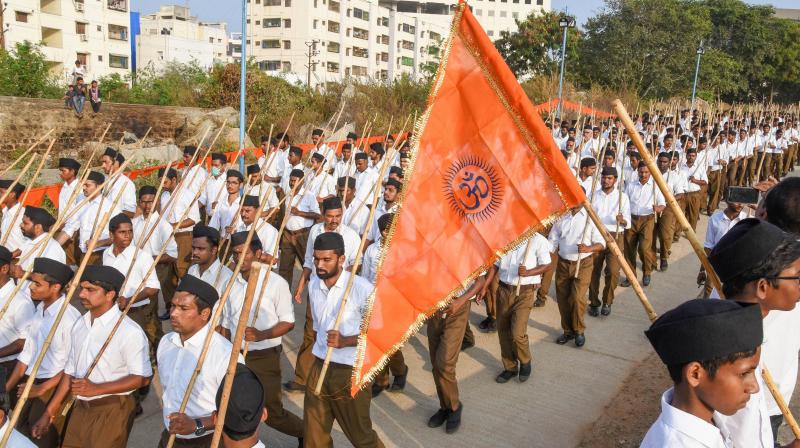 A new generation of RSS and BJP leaders are not inclined to update the Hindutva ideology because their basic presumption of glorifying a dead national past is their basic principle. (Photo:PTI)

The myth about the Rashtriya Swayamsevak Sangh and the BJP is that they are independent entities, though umbilically linked through ideology. That is, each one of them functions on its own, and the one -- that is the RSS -- does not interfere in the internal and day-to-day affairs of the other -- that is the BJP.

The BJP leaders have always maintained that it is not true that they follow the directions issued from Nagpur, the headquarters of the RSS. But the suspicion has lingered among BJP watchers that the saffron party does not have total freedom. That is, the president of the BJP has to be approved by the RSS. Though there are organisational elections in the BJP, there is never a contest, and this is especially so in the case of the president of the party. And there is always a representative of the RSS in the BJP, and many of the RSS folk are seconded to the party. This has been so right from the time when Syama Prasad Mookerjee set up the Bharatiya Jan Sangh with members lent by the RSS, including Deen Dayal Upadhyaya, Balraj Madhok and Atal Behari Vajpayee. Those who joined the BJP in 1980 and who were not members of the RSS were not seen as insiders. This was the case with Jaswant Singh, Sushma Swaraj and even Arun Jaitley.

The equation between the RSS and the BJP became prickly when the BJP came to power in 1996 for a short while, and again in 1998 and 1999 under Atal Behari Vajpayee. It became clear that Vajpayee was older and more senior to then RSS chief K. Sudarshan, and the tussle for dominance became quite embarrassing. Was it because Vajpayee was by nature more liberal and the RSS was dogmatically communal? Vajpayee was as much a dyed-in-the-wool RSS communalist as any other, but the question seemed to be one of personal dominance and tactics. The defeat of the BJP in 2004 came as a blessing in disguise.

In the run-up to the 2014 election, a middle-rung BJP leader indicated that the RSS would be working for the party in the elections, and this was the first time after 1977 that this was happening. The impressive victory of the BJP under Narendra Modi then was a collaborative effort by the RSS-BJP. In many ways, the RSS had kept away from election campaigns in 2004 and in 2009. A middle-rung Congress leader from Uttar Pradesh had opined that the importance of the RSS was exaggerated by the media, and if it was actually true then the BJP should never lose an election.

A senior RSS functionary was once quite irritated when I had sent him a questionnaire for an interview, and he said there were too many questions on RSS-BJP relations, and that the RSS should not be seen through the BJP prism or even the other way around. The implication was that the RSS had its own self-defined goals and could not be reduced to the politics of the BJP.

But many political observers have no doubt that the BJP’s rule is in effect the rule of the RSS, and that Hindutva is the ideological glue. Most BJP leaders are not willing to admit that they are mere pawns and the real command rests with the RSS, and most BJP leaders avoid using the word “Hindutva” though they may be practising it in toto as in the pursuit of measures like the Citizenship Amendment Act (CAA) and the abrogation of Article 370 in the erstwhile state of Jammu and Kashmir.

The electoral victories of 2014 and 2019 have made it clear that the BJP is now the leading party of Hindutva and it no longer has any need to serve an ideological apprenticeship with the RSS and play second fiddle. And that Mr Modi is the undisputed icon of Hindutva, and he doesn’t have to depend on the RSS for ideological ballast. He can articulate it himself. The BJP then doesn’t have to look to the RSS for ideological inputs. The argument that has arisen after the elevation of Dattatreya Hosabale as the RSS’ second in command, replacing Bhaiyaji Joshi, is that Mr Modi and Mr Hosabale are seen as fairly close, and are on the same page, which is hardly a strange formulation given the common ideological roots of the RSS and BJP. It showcases the old dilemma of what should be the nature of the relationship between the two organisations. As Mr Modi remains the dominant figure, the RSS will have to play second fiddle to the BJP. If and when Mr Modi loses his star position, the BJP will have to fall back to the secondary position of being a RSS affiliate.

One of the RSS’ vaunted strengths has been its huge army of foot soldiers through its cells or shakhas, running into millions. It is this amorphous, anonymous army that got activated at election time and which was the invisible strength of the BJP. Amit Shah changed this when he was made president of the BJP by Mr Modi in 2014. He vowed to transform the BJP into a 10 million-strong organisation, and even after J.P. Nadda took over the party, the membership drive continued, and the number has reached 18 million. The BJP’s strategy seemed to be that the party must have its own foot soldiers and that it should not depend on the RSS volunteers. But a friend pointed out that there is a big difference between the BJP’s millions of members and the RSS cadres. The members are only BJP voters and they are not necessarily party workers. The RSS will still have the advantage as it has a dedicated cadre base.

It is also questionable whether the BJP really needs the RSS to formulate or refine the Hindutva ideology because Hindutva remains a crude, simplistic ideology of majoritarianism. There is not much need for redefining it, much less refining it. A new generation of RSS and BJP leaders are not inclined to update the Hindutva ideology because their basic presumption of glorifying a dead national past is their basic principle. If the BJP survives in power, it may not need the RSS much longer. The RSS then will have no option but to slowly wither away.