Time to bite the bullet, not chant bhai-bhai

The first and foremost difference is where do both India and China see themselves in 2040. 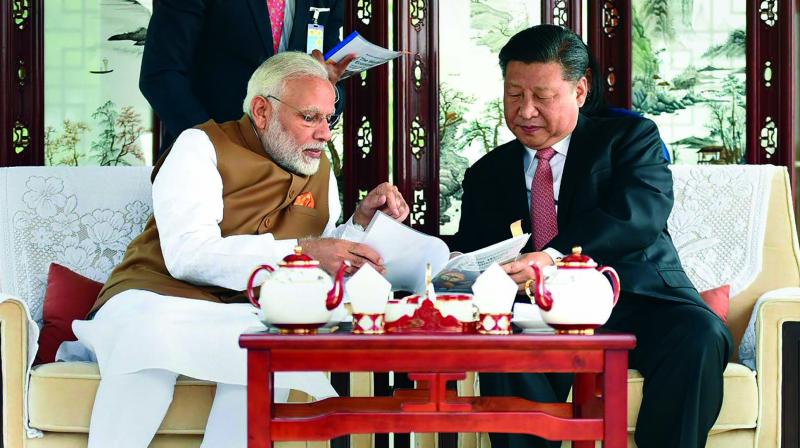 Beyond the paroxysms of ecstasy in the Indian television media over the summit in Wuhan there are fundamental contradictions between India and China that shouldn’t be glossed over. Before coming to the substantive aspects of the deep divergences that bedevil the relationship, a word about the atmospherics.

While the Indian side was quick to issue an 11-paragraph statement delineating their version of the discussions between the Indian Prime Minister and the Chinese President, prefaced by a detailed briefing by the Indian foreign secretary there was no official word from the Chinese side on the Wuhan process. In fact, in the regular briefing by the Chinese foreign ministry spokesperson on the of April 27, there was not even a word about the event in Wuhan even as it was unfolding.

The first and foremost difference is where do both India and China see themselves in 2040. Are the Middle Kingdom’s aspirations of becoming a global power compatible with India’s aspiration of being an important player in the evolving multi-polarity of the global order? The answer is no. For India’s fundamental foreign policy construct stands at odds with Chinese designs in the Indian Ocean Region to begin with. Nothing manifests itself more than the Chinese desire for bases all across this geography. If Chinese sources are accurate, then the PLAN (People’s liberation Army Navy) has been advised to construct as many as 18 overseas Naval military bases not limited to the greater Indo-Pacific region that includes Chongjin (North Korea), Moresby (Papua New Guinea), Sihanoukville (Cambodia), Koh-Lanta (Thailand), Sittwe (Myanmar), Dhaka (Bangladesh), Gwadar (Pakistan), Hamabantota port (Sri Lanka), Maldives, Seychelles, Djibouti (Djibouti), Lagos(Nigeria), Mombasa (Kenya), Dar-es-Salaam (Tanzania), Luanda(Angola) and Walvis Bay in (Namibia). The quintessential “String of Pearls”.

Out of these, three in India’s immediate neighborhood are most worrying, namely Gwadar in Pakistan, Hambantatotta in Sri Lanka and the proposed surveillance station that will come at Makunudhoo island of the Maldives not far from Kerala and the Sri Lankan coast. The latter can be quickly upgraded to a submarine base that would give the Chinese Navy the ability to interdict crucial international shipping routes. This is a direct challenge to India’s maritime supremacy, sits as it does on the head of the Indian Ocean.

The related dilemma is with regard to the Quadrilateral between the United States, Japan, Australia and India. The idea of the Quad, as it is called, was first mooted in 2007 but never got much traction except for some joint Naval exercises in the Bay of Bengal. The first Quad miscarried as Australia summarily walked out and India followed suit. This coincided with the 2007-2008 economic crises that saw Chinese economic power go up several levels and the initiation of a phase of military assertion by the Chinese across the board from the Senkaku islands, and on the Sino-Indian border. The idea was revived again during the last Asean summit in Manila. Howsoever India may want to spin it, but China sees the Quad as a measure of containment and is decidedly uncomfortable with this “alliance of democracies”. How will India square up it’s commitment to the Quad with a smoother relationship with China is logic defying. Ultimately India would have to bite the bullet and choose between bending to the Chinese wind or its strategic autonomy underpinned by the Quad? It should be no surprise, which way India should tilt!

Then there is the South Asian question. For 70 years, India has considered South Asia as its near abroad. The region is equivalent of its Monroe Doctrine. The world at large has respected India’s right to its eminent domain. However, that is not the case any longer. China has been actively patronising all the anti-India elements in the region beginning with Pakistan with whom it has a robust military and even nuclear and missile technology cooperation if not supply relationship stretching back decades.

In the past four years this strategic embrace has expanded beyond Pakistan. China is actively patronising all the anti-India elements and political forces in the region, be it in Nepal, Sri Lanka, Abdulla Yameen government in the Maldives or hostile organisations in Bangladesh. It also seeks to punish those who still stand in solidarity with India. Doklam was nothing but a warning shot across the bows to Bhutan for standing by India in its boycott of the Belt and Road Conference in Bejing last year. The litmus test for India is whether after the Wuhan summit  China will continue to back those political forces in the Bangladesh general elections, scheduled to be held at the end of 2018, who wear their hostility to India on their sleeve?

Then there is the Belt and Road Initiative (BRI) — President Xi Jingping’s signature initative. While the Indian side has put it out that the Chinese would not insist on India joining the BRI, the fact remains that the project, especially its CPEC (China Pakistan Economic Corridor) dimension, is a direct assault on India’s sovereignty and territorial integrity.

Can India afford to look the other way? The tragic irony is while the BJP government has been carping about CPEC for over four years now, it has failed to unveil an alternative vision to challenge it, forget about breaking the vision down into implementable projects.

Finally, on the border question also while the Indian side has waxed eloquent about China’s commitment to the Special Representative (SR) Process to resolve the vexed border question between the two neighbors, the fact remains that the Chinese have walked away from the agreement arrived between the two sides on April 11, 2005, on the political parameters and guiding principles for the settlement of the India-China boundary question, especially the issue of not disturbing settled populations in both the nations.

The Sino-India relationship does not require a bhai-bhai chant. It requires India to create ballast on its side. It is time to bite the bullet.