Modi 2.0 has, however, taken a tough line against any critical references to India on the issue of religious rights and freedom. 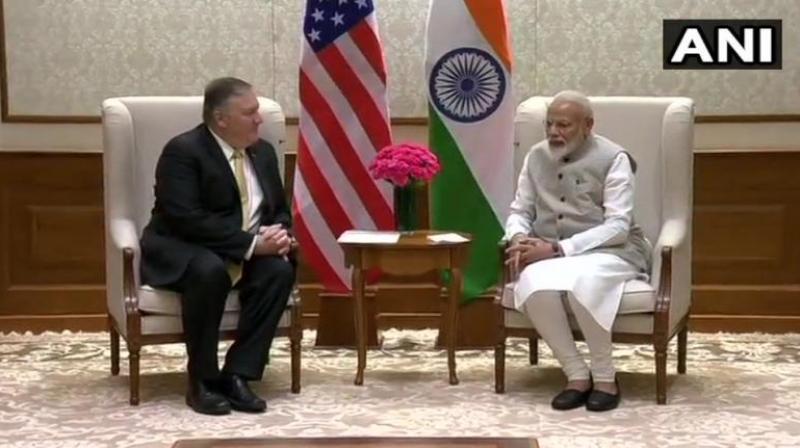 There is something about American political sermons and the early period of Prime Minister Narendra Modi’s tenures in office. In January 2015, barely eight months into office, Mr Modi was obliquely reminded by then US President Barack Obama, at a “town hall” address in New Delhi to young Indians, that religious freedom must be upheld in India. “India will succeed so long as it is not splintered along the lines of religious faith,” the then US President had said.

On Wednesday, amid a whirlwind of engagements in the Indian capital, US secretary of state Mike Pompeo spoke at the India International Centre, where he reminded the Indian government of the necessity to speak in favour of freedom of religion. Delivering a major policy speech at the end of his visit to India, he emphasised: “India is the birthplace of four major world religions.  Let’s stand up, let’s stand up together in defence of religious freedom for all.  Let’s speak out strongly together in favour of those rights, for whenever we do compromise those rights, the world is worse off.”

In 2015, President Obama reiterated the point he made in New Delhi at the National Prayer Breakfast in Washington D.C. His intervention impacted the Narendra Modi government — the Prime Minister delivered a speech addressing issues flagged and thereafter sent an emissary with a chadar to the Ajmer dargah. There is no knowing whether Mr Pompeo will follow up on his intervention in New Delhi, but the American government is often prodded by human rights groups in that country to keep stressing the importance of religious freedom. As Mr Obama's speech and Mr Pompeo’s address shows, Washington believes in using high-profile public events, which are not bilateral but held in countries for whom the concern is intended. It has to be seen if Mr Modi picks the gauntlet and sends out a more direct message to his supporters than what he has done so far with his “sabka vishwas” (trust of all) entreaties so far.

Modi 2.0 has, however, taken a tough line against any critical references to India on the issue of religious rights and freedom. Days before his visit to New Delhi, Mr Pompeo released the annual report of the US Commission on International Religious Freedom, which had categorised India as being among the countries where “it is increasingly difficult to separate religion and politics, a tactic that is sometimes intentional by those who seek to discriminate against and restrict the rights of certain religious communities”. Almost anticipating the Indian response to the report that it saw “no locus standi for a foreign entity or government to pronounce on the state of our citizens’ constitutionally protected rights”, the USCIRF 2018 report wrote that governments like the Indian “often decry ‘interference in internal affairs’ when they are rightfully admonished for their deplorable religious freedom and human rights records”.

This is not the first time that India featured negatively in the USCIRF report — such mentions predate Modi 1.0 too and has been on the Watch List or in the Tier 2 category since 2009 because despite its “pluralistic, secular democracy”, it “has long struggled to protect minority religious communities or provide justice when crimes occur, which perpetuates a climate of impunity”. However, while the report of 2012, recorded “intimidation, harassment, and occasional small-scale violence against members of religious minority groups”, chiefly Christians in states with anti-conversion laws, in 2015, by when the Modi government had stormed into office on the back of a polarising campaign, India was noted as being among nations where “violations engaged in or tolerated by the government are serious and are characterised by at least one of the elements of the ‘systematic, ongoing, and egregious’ standard”. The 2014 Lok Sabha campaign was dubbed “religiously divisive” and the report noted that after Prime Minister Modi assumed office, “religious minority communities have been subject to derogatory comments by politicians linked to the ruling BJP and numerous violent attacks and forced conversions by Hindu nationalist groups”.

The threat to religious freedom in India has risen since 2014-15 and finds mention in the latest USCIRF report, which is now the bone of contention between India and the United States. The report notes: “Religious freedom has come under attack in recent years with the growth of exclusionary extremist narratives — including, at times, the government’s allowance and encouragement of mob violence against religious minorities —that have facilitated an egregious and ongoing campaign of violence, intimidation, and harassment against non-Hindu and lower-caste Hindu minorities.” The report singles out Mr Modi because he “seldom made statements decrying mob violence, and certain members of his political party have affiliations with Hindu extremist groups and used inflammatory language about religious minorities publicly”.

The USCIRF reports annually held the mirror up to New Delhi and this explains why it has repeatedly rejected such depiction. As Mr Modi steps up his efforts for India to be counted more prominently than before, the government will have to be more embracing towards religious minorities. Mr Pompeo had stressed that “the US-India friendship is rooted in a solid foundation” and this features “the rule of law, respect for human dignity, the importance of civil society… These ideals, they allow people to flourish”.

The Indian government certainly disliked the secretary of state saying that Indians believed in these principles, just as the Americans did. Mr Pompeo also reminded the Indian government that India and the United States “share common historical thread. We both struggled for independence. We both wrote Constitutions that begin with the words ‘We the People’.  And we both protect unalienable rights.”

The challenge that confronts the BJP is simple — in the era of globalisation it wishes to take the nation to new heights to ensure permanence in the power elite. Because of our pressed commitment to democracy, there will be pressure to ensure these “unalienable rights” of all people is protected. But if the government presses too hard on this, it stands to lose the support of its core constituency, fed on a diet of prejudice against religious minorities and marginal groups. How Prime Minister Modi will balance these conflicting necessities requires close scrutiny through the course of his tenure.