The monsoon has been erratic, with long dry spells broken by cloudbursts that trigger floods and landslides 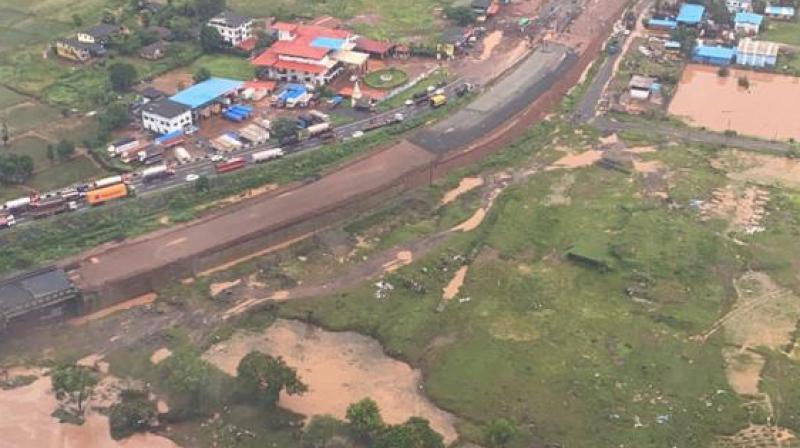 Maharashtra has had the heaviest rain in July in four decades, all within a few days. (Indian Navy/ AFP Photo)

“This can’t happen here” is a dangerously risky idea -- that is the key lesson from the recent spate of extreme weather events across Europe, North America, Asia, Oceania and Africa. Extreme heatwaves, floods and wildfires that not only damage but also kill can hit rich industrialised countries as much as developing ones.

Every sane person now knows this is due to climate change. Reversing climate change by moving away from coal, oil and gas is essential, but the results will show only in decades, if not centuries. We need to deal right now with the climate change impacts we are facing today.

The monsoon has been erratic, with long dry spells broken by cloudbursts that trigger floods and landslides. Maharashtra has had the heaviest rain in July in four decades, all within a few days. The death toll from the consequent landslides is in hundreds. Nine tourists have died in a landslip triggered by intense rainfall in Himachal Pradesh’s Kinnaur district. Floods in Bihar are now so routine they are barely reported.

Climate change leads to warmer clouds that lead to more lightning. India has seen a record number of lightning deaths this year. The number has been going up throughout the last decade.

Science is increasingly clear that extreme rainfall events and associated floods of the kind we saw in recent weeks are being made more likely by climate change, says Dr Aditi Mukherji, principal researcher at International Water Management Institute and coordinating lead author of the chapter on water in the next report of the Intergovernmental Panel on Climate Change (IPCC).

Who would think that parts of the United States and Canada could be hit by catastrophic heatwaves? On June 27, Lytton in British Columbia, Canada, officially registered a temperature of 46.6 degrees Celsius -- the kind of temperature we associate with places in the Thar desert in peak summer. Hundreds died of heatstroke in British Columbia. The heat sparked wildfires, and just about the entire town went up in flames.

Who would have thought that devastating floods which turn streets into rivers, trap people in cellars and kill could happen in Europe? In Germany alone, nearly 200 people have died. More than 700 are injured and many remain missing in the worst floods in decades.

When German Chancellor Angela Merkel visited the flood-ravaged town of Adenau in the state of Rhineland-Palatinate on July 18, the scene was terrifying enough for her to say: “The German language can barely describe the devastation.” As I write, the death toll after floods has risen to 41 in Belgium. In the province of Limburg in the Netherlands, there have been massive power outages. mass evacuations started on July 16.

“Clearly, tragically, the whole system designed to save lives by ensuring people act on warnings before floods arrive, did not work as it should have done,” lamented Hannah Cloke, professor of hydrology, University of Reading, in a recent article in The Conversation, a news and commentary portal.

Floods are also battering parts of central China while wildfires caused by extremely high temperatures ravage Siberia and California at the same time.

Like the pandemic, the climate emergency is exposing the frailties of all political systems, economic models and societies.

What will it take to have public policies that factor in the urgency of the crises caused by these extreme weather events?

“There is nothing better for mobilising public action than visible suffering,” says Dan Banik, professor of political science at the University of Oslo and director of The Oslo SDG Initiative, which focuses on sustainable development goals.

Many scholars, Prof. Banik points out, have long accepted the links between climate disruption and natural disasters. “However, following recent heatwaves and floods in Europe and forest fires and drought in the United States, the general public in industrialised countries appears to increasingly accept this linkage. For me, the message is that there is greater visibility now of the scenarios that academics have been warning about for decades.”

Some commentators, says Prof. Banik, argue that extreme weather events in the recent past have not resulted in drastic changes in public policy but he prefers to be optimistic, “especially given the growing climate activism among the youth and the influential role that Green political parties are playing in European politics, including in Norway”.

Arguably, just as the pandemic has affected everyone, but not equally, climate change is affecting everyone but not always in the same way. There is no getting away from the big difference between the adaptive capacities in the developed and developing worlds.

And this difference persists within countries like India, which has the scientific capability to know what is happening but where the majority of the population is part of the informal economy with little social protection or insurance.

Take heatwaves. Some of us can retreat inside airconditioned rooms and work from homes and offices. Many have to be outdoors to earn a living. They can be helped.

Around two dozen Indian cities and four states have developed Heat Action Plans (HAPs) pioneered in Ahmedabad. This involves greater public awareness, identification of high-risk groups, heatwave alerts, better inter-agency collaboration and so on. All of India needs to follow.

“Scientists can now attribute climate change fingerprint to most extreme events provided there is long-time observation data on hydro-meteorological parameters,” says Aditi Mukherji. While India does have advanced capabilities for this, with institutions like the Indian Institute of Tropical Meteorology and others, we don’t see a lot of attribution studies as yet from the region, she adds.

As far as action is concerned, some states like Odisha have done well in disaster management. But megacities like Mumbai still cannot deal with heavy rain. This is a matter of political will.

We cannot afford to forget that “climate hazards alone don’t make a disaster; a disaster is a social phenomenon and happens due to existing inequalities and the most vulnerable are the ones most exposed to hazards,” as Dr Mukherji puts it.

And therefore, there is an absolute need to reduce vulnerabilities and exposure to reduce the impact of disasters. What is needed, especially in the developing world where millions live and work in an extreme state of precarity, is a whole range of public policies related to not just rescue and relief as is mostly the case now, but also insurance, social protection and rehabilitation.