In the time of pandemics and climate change, no problem can be dismissed as someone else’s headache 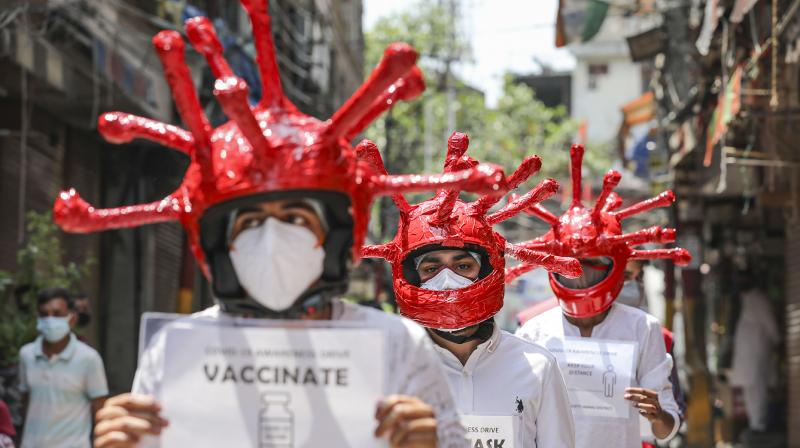 It is a global warning. The cosy thought that “it-can’t-happen-here” is past its expiry date. It can, and it will.

African researchers have been sounding the alarm about monkeypox outbreaks for years. It was shrugged off as an African problem. Today, it is spreading across the world. The World Health Organisation (WHO) has declared the disease a global health emergency. More than 18,000 cases of monkeypox have been reported from 78 countries. At the time of writing, there have been four cases in India, the most recent one in New Delhi. The patient has no history of foreign travel.

Another telling development -- the United States just reported its first polio case in nearly a decade.

Then, there are heatwaves, exacerbated by climate change. These are no longer confined to countries fabled for their hot weather. This summer, Europe, which is known for its temperate climate, has been frying in devastating heat. Nearly 2,000 people are reported to have died of intense heat in the Iberian Peninsula alone this year.

The short answer -- a resounding yes!

First, traditional labels like “developing country” and “developed country” no longer apply in many situations. We know this from our experience, and we should remember it as we brace ourselves for another public health emergency while continuing to grapple with the long shadow of the coronavirus pandemic.

Second, the health and environmental crises of today with their attendant economic, political and cultural impacts recognise no borders. Everyone is affected, though not equally. No one can afford to think that he or she is somehow immune to whatever is ravaging denizens of poorer and distant lands.

Third, it is time to accept that no country in the world is fully prepared for the uncertainties of the present and the foreseeable future, and that the Global South and the Global North do not exist in silos. Both can and must learn from each other. Preparedness, to the extent possible, is critical and collaboration will be key to survival.

“Heat is Europe’s deadliest natural disaster. In the last four decades, between 76,000 and 128,000 people have died in heat waves,” said an article in Politico, citing European Economic Area data. What is interesting is that high heat-related fatalities over the past decades have been recorded not just in Spain or Italy, but also in Germany.

In a recent report titled “How can Europe adapt to extreme heat”, German broadcaster Deutsche Welle (DW) explored solutions that other regions have used to alleviate the risks of extreme heat.

Europe has stepped up preparedness since the deadly summer of 2003, when temperatures of over 40 degrees Celsius led to hospitals in France being overwhelmed by patients, particularly the elderly, the report said. Now, many European cities have surveillance systems and heat action plans. The DW report cautioned against treating high temperatures “as a novelty” and flagged good practices from countries more experienced in dealing with extreme heat. It cited the example of Ahmedabad’s heat action plan, set up in 2013 in response to a heat wave in 2010 that led to over 1,000 deaths.

“Ahmedabad in western India, which suffers from regular bouts of extreme heat, has developed a series of Heat Action Plans in the last decade that coordinate responses between the state and local communities. When a heat alert is issued, warnings are delivered by TV, radio and text message, and a special heat hotline is advertised in public spaces. Community health groups are tasked with reaching the vulnerable; employers are urged to provide shade and rest for workers, many of whom labour outdoors; and temples, libraries and bus stops are repurposed as cooling centres and water distribution points,” it said.

Employers in Europe will have to change their attitudes to working outdoors or in poorly ventilated spaces, even if it comes at the cost of productivity, the DW report noted.

As the climate crisis continues to trigger heatwaves around the world and temperatures shoot up, rich and poor countries are faced with the question of how to remain liveable. Some can temporarily protect themselves with air-conditioning and working indoors but this is not sustainable. Extreme and unseasonal heat also impacts agriculture as we saw with the wheat crop in northern India. Soaring temperature poses risks to critical infrastructure too.

In London, Luton airport had to suspend flights after heat damaged the runway.

In France, nuclear power plants had to modify their operations as the cooling water became too warm.

What can India learn from these converging crises? The key takeaway -- we cannot afford to be complacent and preparedness is everything, whether in dealing with monkeypox or heatwave or the after-effects of the Covid-19 pandemic.

India lost tens of thousands of people during the HIV and AIDS epidemic because many in decision-making positions at that time believed “it can’t happen here” and that it was a problem of the West and Africa. We were proved wrong.

It is important to remember that in the time of monkeypox. The affected numbers are still very small but in this interconnected world, nothing is far. In many countries, monkeypox is being framed as a “gay disease”. That kind of labelling is unhelpful and fuels stigma. What needs to be stressed is that some cases have been identified through sexual health clinics in communities of gay, bisexual and other men who have sex with men, but it is “important to note that the risk of monkeypox is not limited to men who have sex with men”, WHO points out. The key message -- anyone who has close contact with someone who is infectious is at risk.

The last case of polio in India was reported in Howrah, West Bengal, on January 13, 2011. Since then, India has been polio-free. But the recent polio case in the United States is a reminder that one can never say never and yet another signal that more disease tracking is critical. It is also a clarion call to all countries to invest in better surveillance networks, including wastewater monitoring.

In the time of pandemics and climate change, no problem can be dismissed as someone else’s headache. All countries are at risk of frequent extreme weather events. Diseases don’t recognise demarcations between the Global North and the Global South. Vaccines and drugs developed for smallpox may work well against monkeypox but as with Covid-19, equitable distribution and access to vaccines will be the key issue.

The vulnerabilities are global. The response has to be necessarily global. Or else all of us will be much worse off.