The first Chinese incursion in Barahoti, in today’s Chamoli district of Uttarakhand, occurred in June 1954 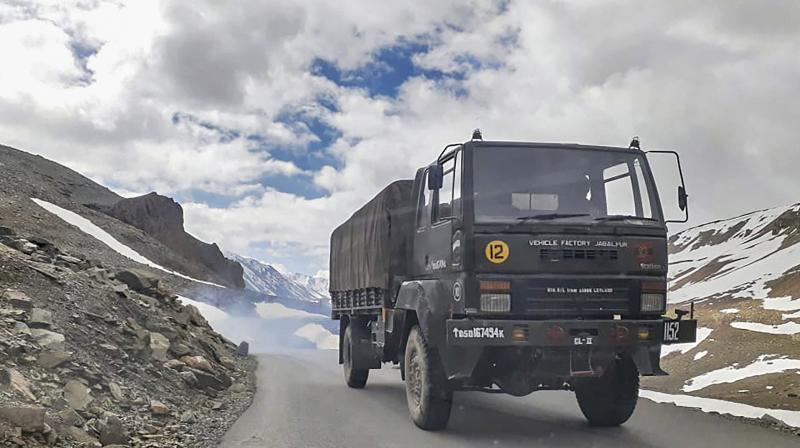 While multiple rounds of negotiations have been held between the Indian corps commander and his Chinese counterpart, not much hope remains for a “pre-April” solution before winter sets in. PTI Photo

After China’s People’s Liberation Army had crossed the Line of Actual Control, which for years has been considered as the de facto border between the two countries, in Ladakh, China’s ambassador to India Sun Weidong had the gall to say that the two countries should be partners, not rivals.

On July 10, he added that the June 15 Galwan Valley clash was a “situation that neither China nor India would like to see… Currently, our frontline troops are disengaging on the ground.”

All this does not tally with the facts.

Sun also insisted: “China has all along advocated that peace is of paramount importance. We are neither a warlike state nor an assertive country.”

It seems to be a bad joke.

While multiple rounds of negotiations have been held between the Indian corps commander and his Chinese counterpart, not much hope remains for a “pre-April” solution before winter sets in. When Beijing suggested that both sides go back equidistantly from the Finger 4 area in Ladakh, this was rejected by New Delhi.

In the meantime, Chief of Defence Staff Gen. Bipin Rawat has declared that the “military option” was on the table if the diplomatic option failed.

But what is far more worrying is the possibility of the PLA opening a second front in the central sector of the 4,056-km Sino-Indian boundary.

On May 17, IANS reported that Chinese helicopters had violated Indian airspace twice in Himachal Pradesh in April: “The first intrusion was reported on April 11 and the second on April 20. In both incidents, a Chinese helicopter was observed flying on the Indian side of the international border close to Sumdoh in Spiti subdivision,” an official was quoted as saying.

Most of the Indian media reported the area was not “disputed” by China, but that isn’t the case. This area, called Chuva and Chuje by Beijing, has since the mid-1950s been on China’s long list of places selected to extend its territory.

In fact, there are five “disputed” areas in the central sector, which stretches over Himachal Pradesh and Uttarakhand: Chuva-Chuje, Shipki-la, Nilang-Jadhang, Barahoti-Lapthal and Lipulekh (recently engulfed in Nepal’s new maps).

On July 30, 1980, the now-defunct historical division of the external affairs ministry sent a Secret Note to the East Asia division, dealing with China. This was with reference to the claims/occupation by China of some Indian areas in the central sector.

This note described the Sino-Indian boundary in the middle sector. “This sector of the boundary also has natural features of watersheds, mountain passes and river valleys.

The historical division said at the 1960 talks with China, Indian officials brought forward clear and conclusive evidence “to show that the alignment as shown by them in the middle sector had, throughout its length a traditional and customary basis reaching back through many centuries, and that, in addition, this boundary had been… confirmed through diplomatic exchanges, treaties and agreements”.

However, every year, intrusions are reported in Barahoti, another area “perceived” by China as its territory; even though the small basin is located south of the watershed marked by the Tunjun-la.

Let us remember that in April 1954, India and China signed the infamous “Panchsheel” agreement, with New Delhi giving away its rights in Tibet and getting nothing in return.

It took only two months for India to discover that everything had not been solved.

The first Chinese incursion in Barahoti, in today’s Chamoli district of Uttarakhand, occurred in June 1954; the ink had hardly dried on the agreement when the Chinese trespassed in the area. The irony is that it was China who complained about the incursion of Indian troops — on Indian territory!

In a way, Barahoti could be explained by the fact that Indian negotiators had omitted to notify Tunjun-la as a border pass in the 1954 Tibet agreement; this gave an opportunity to the Chinese to claim the Barahoti plains, south of the pass.

In April 1958, for the first time, officials of India and China sat together to try and resolve the issue. But as an unnecessary compromise, India agreed that Chinese “unarmed” patrols could visit the place in summer till the matter was solved; Beijing never respected that and repeatedly sent armed soldiers to Barahoti.

Then there is the area south of Shipki-la (pass) in Kinnaur district of Himachal Pradesh.  This is another tenuous claim from China, with no historical, cartographical or geographical backup.

It is now a dormant claim, but with Beijing in the mood to claim Tajikistan’s Pamir region and Vladivostok (and Ladakh), it could well be revived.

It is a plain violation of Indian territory, without any justification as it was mentioned in the 1954 agreement, which meant that north of the pass was Tibet and south India.

Other places “disputed” by China in the central sector are Nilang (Nelang) and Jadhang, located south of Tsangchok-la. It was the only area disputed by the Tibetan government before independence; but it was a “gentle” dispute between neighbours sharing the same values. No troops were ever involved.

For Tibetans, their claim was based on the fact that the 13th Dalai Lama is supposed to have said the border was located at a bridge on the Gumgum nala on the way to Gangotri.

For British India, the principle of the watershed was the prime deciding factor and thus Tsangchok-la was the border (India has since Independence followed the same principle).

What is strange is that these claims are not based on any of the principles normally used to demarcate a boundary — watershed, river, customary routes, grazing rights, etc.

That is why it’s difficult to talk to China, they always play by their own changeable rules, promoting their own interests.

These claims could indeed be pretexts for China’s adventurism in future; and India should be ready to respond.