Since kissing from two metres away is a physical impossibility, this rule isn’t hard to maintain except for politicians and cheats 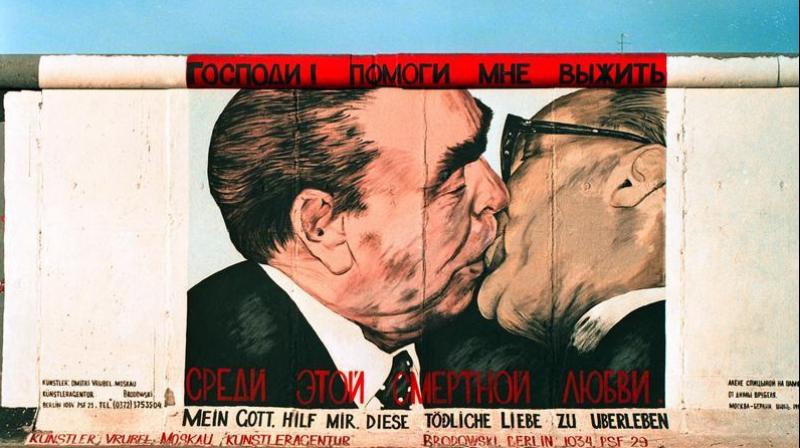 A couple kiss as they visit an outdoor light immersive experience exhibition during the 2020 Beijing International Light Festival at a park in Beijing. AFP Photo

The new normal has brought with it new priorities, new rules of engagement, and a new or rarely-used-before vocabulary, which includes ‘coronavirus’ itself, wfh (bet you thought it a swear word at first — I did!), lockdown, flattening the curve, and social distancing. We all now know the two-metre rule, though we don’t seem to be able to abide by it (what’s with all the barging, People?).

We’ve also been advised not to hold hands, hug or kiss, except in our bubbles. Since kissing from two metres away is a physical impossibility, this rule isn’t hard to maintain except for politicians and cheats, viz. often one and the same.

The rags are full of scandals about British politicians caught with their pants two metres down, in bubbles that don’t appear to be theirs, because the lockdown rules have eluded them (though they made them themselves).

Yet, for many of us the pandemic rules of engagement are no more baffling than those we had to contend with before, such as the etiquette around kissing, aka. Kissiquette.

Having had two children, and perfectly aware of how they came about, it’s not romantic or affectionate smooching that perplexes, but the formal, impersonal, performative variety, practised with relative strangers.

1) How many kisses before one can disengage?  Us plebs would have it at one, if at all. But if you’re part of the fashionable set, it is at least two, on either cheek.

This, I understand, is French (not to be mistaken for French kissing which doesn’t involve cheeks at all). At other times, they will complete their pair of kisses and lean in for a third. The Swiss Kiss, I believe.

This is fraught with danger. Will they or won’t they? Will you offend them by stepping away too soon or unwittingly end up molesting them by moving in for an unwanted third?

As a writer and a reclusive one, this is more stress than I can handle, especially at festival time, when the literary fraternity morph into showbiz luvvies, rushing into the arms of their peers, no matter how often they’ve stabbed each other in the back.

At one such, I found myself in a sticky situation when having kissed me twice, the well-known author surfaced for air, but did not appear to have finished. Very much the novice, at both literary fests and social snogging, I became so unnerved by the ticking time bomb of our face-off, I found myself holding up my half-eaten biscuit and squeaking, “Want my cookie?” They did not, nor my company thereafter.

Which settled that, but left me no wiser about how many kisses are too many. Or why not a wave, smile, or namaste instead?

2) Whose idea was it to start blowing kisses on Zoom? In these long months of webinars, only one person has, thus far, ended a session by actually planting a smacker on the screen. But nearly everyone now blows kisses at it. The problem with virtual kisses is that they’re so indiscriminate.

You cannot blow kisses selectively. It has to be to everyone in the ‘room’ or not at all. Or go to extraordinary lengths to ensure you’re left at the end with the right people, the kissable people.

Or shut down screens, open up other screens, kiss the wrong people. Gaah. What if, outrageous though it might sound, a blown kiss for you is not a thing of air and inconsequence but an affirmation of actual affection? And blowing kisses to all and sundry smack of hypocrisy?

If that’s making heavy weather of something slight, doesn’t the awkwardness of it all bother you? While the planted smacker may have been the only one, several people in their inelegant attempt to throw kisses from too close to the screen have thwacked it instead, jolting the session to a premature close.

Of course friendly chats shouldn’t stint on kisses blown, but strangely, younger, singler friends tell me that romantic assignations, much of which has moved online, have turned out terribly chaste.

That there’s no va-va-voom in Zoom, no Tinder kegs are lit, and blowing of any sort hardly happens. Through time and tide and many conversations, slow and steady wins the kiss. Like the amours conducted through epistles in the pages of an Austen classic.

3) But what would Jane have made of kissy emojis and the many curious crosses in texts? Oh I’ve learnt to mirror them exactly when writing back, in the hope no one guesses I haven’t a clue what they mean.

I get that they’re kisses of course, and a convenient way of expressing affection in writing, because how many of us have time to compose sonnets? Yet, how many emoji hearts are too many? What colour should they be? If it’s a kissy emoji, should it wink, for example, if your feelings are true? How about those pesky little exes, I mean x’s; when are they in excess?

I was led to believe a capital X denoted passion till the many messages from my 102-year-old great-aunt-in-law, each carrying giant X’s, convinced me otherwise.

Similarly, when is it “love”, and when “luv”? Whatever it is, I must have got it wrong hundreds of times, and offended as many as I’ve scared!

I know I no longer need worry in this pandemic if in-the-flesh salutations involve one kiss or three (hurrah).

And if biscuits are misplaced in such transactions, there’s clearly more for me (double hurrah). Yet the question stands- how much performative love is too much (or too little), and why wasn’t I sent the explanatory memo everyone else got?

If you know the answers to these, especially the correct number of kisses, please drop them into an envelope and send to The Editor, Deccan Chronicle, Hyderabad.