Aakar Patel | India headed in wrong direction: Is it too late to correct course? 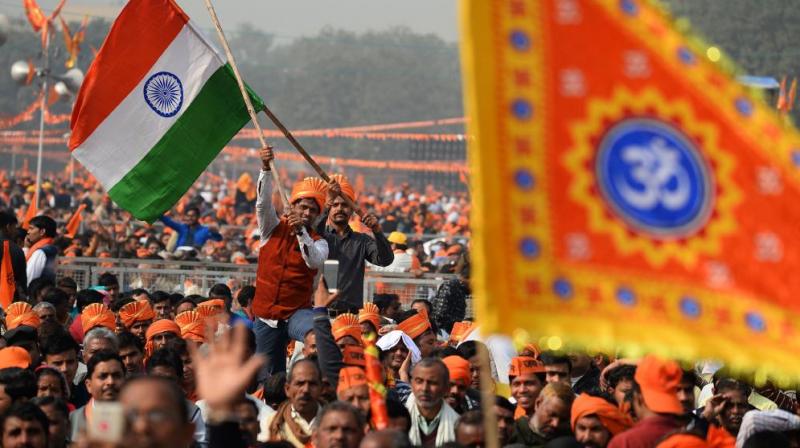 It appears that many Indians are not primarily voting on the basis of issues like the economy and their own well-being as measured by data provided by the government. (Photo: AFP)

I wrote a book that was published a few months ago. The problem with writing books in India, especially non-fiction and related to history, is that not many people read such books. The quality of the book and the fame of the author is not important for the most part. The print run, meaning the number of copies of such books printed, is limited to a few thousand. Usually that print run lasts for years and it is not uncommon to see books that were published years ago still on the shelves.

I wrote a book translating the Urdu non-fiction writing of Saadat Hasan Manto in 2014. Manto is a very famous name in literature, but even that book is still in its first print run. The new book is called Our Hindu Rashtra, and it examines where India stands today with respect to its constitutional promise of being a secular and democratic state.

We are a democracy if you consider democracy simply to be free and fair elections. The rest of the world does not. In the Freedom House rankings, which recently demoted India to “partly free”, only 40 per cent weightage was given to the political rights of citizens, where full marks were given to India for free and fair elections. It was on civil liberties and fundamental rights that India scored so badly that the good work done by free elections was negated.

My book examines this same, process but over a longer timeframe. The book is called Our Hindu Rashtra because in my opinion, we have already become one. No constitutional or other major change is required for India to continue doing what it has been doing since 2014. In Pakistan, the exclusion of minorities has been done by law, and in India it has been done by practice.

That is the only difference between the two nations. We have become as much of a religious state as Pakistan and this is a fact. Pakistan has no Hindu chief minister in its four provinces and India has no Muslim chief minister in its 28 states. Of India’s ruling party’s 303 Lok Sabha members, there is no Muslim, and in 15 Indian states there is no Muslim minister. In 10 other states there is only one, who is usually given the minority affairs portfolio.

Laws that specifically gave rights to religious minorities, such as propagation and occupation, have been undone by India. The various, deviously named “freedom of religion” laws that Indian states have passed actually take freedom away from us. The bans on cattle slaughter go against the right to occupation, which is a fundamental right only in name.

As a nation, we do not have a problem with these things and this is why they are not a political issue (only some columnists keep whining about them all the time). This is why I say we are already a Hindu Rashtra structurally.

The other thing is that this marginalising of India’s minorities and the writing of laws and policies that inconvenience them appears to be a very large part of why Indians vote the way they do. India is an economy that is in its fourth year of slowing in terms of GDP growth. But there is not much media around this fact. India is the only economy in South Asia to be in recession, but we don’t seem concerned by this either or it would be an election issue and a subject for the media. Similarly, unemployment, which is at historic highs and has been since 2017, is not apparently as important as laws that stop women from marrying outside their religion, or who is allowed to enter temples and such things.

We are told we are being led by a nationalist party but we are also informed that the situation in Ladakh is no different today than it was last year. The fact that newspaper reports have claimed that about 1,000 sq km of land that we could patrol earlier we cannot today has not led to any questioning of the idea that this is a nationalist government. Its nationalist credentials have been established and bolstered by the actions it has taken against its own citizens, including the minorities, and not externally. This is the other reason I believe that we are already living in a form of Hindu Rashtra.

The question is what comes after this. My view is that it will be more of the same. It appears that many Indians are not primarily voting on the basis of issues like the economy and their own well-being as measured by data provided by the government. They seem to be as concerned and perhaps more concerned about other things, especially those that have to do with the harassment of India’s minorities. Much of the media has joined them in this and avoids issues like jobs and economic decline even if a leader of Rahul Gandhi’s stature raises them. This is quite remarkable in a nation that is democratic and gets offended by the world saying that it is headed in the wrong way. But every fact on the ground shows that we are, in fact, headed in the wrong way and that there is no mechanism we appear to have to correct our course.