Opinion   Columnists  30 May 2019  Modi’s welfarism: Some action, a lot of emotion
Opinion, Columnists

Modi’s welfarism: Some action, a lot of emotion

Modi framed the gas cylinder scheme not just as something that would reduce indoor air pollution but also empower the poorest. 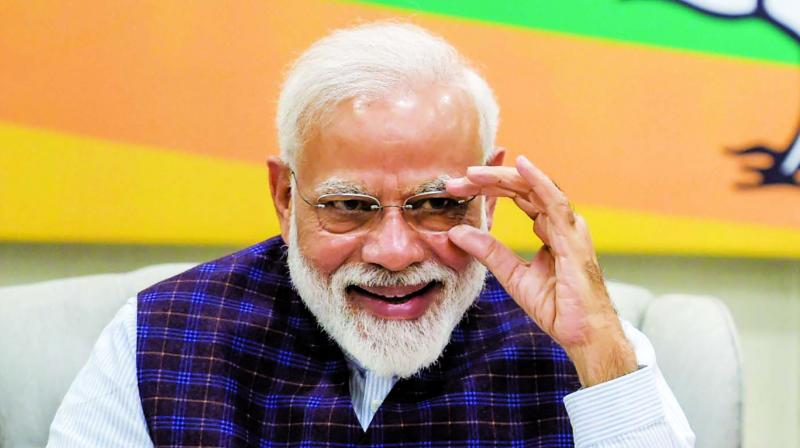 How do you mix, shake and stir Hindutva with welfare politics to come up with a winning cocktail that guarantees you a landslide victory in the elections? Political scientists and psephologists are still trying to make sense of Verdict 2019 as Team Modi 2.0 settles in. It is increasingly clear that the stunning victory of the BJP, or rather Prime Minister Narendra Modi in the recent polls is not due to any one factor. There is a whole mix, which includes polarisation, muscular nationalism, and the Balakot bump. The Pulwama terror attack and India’s airstrikes across the border in Pakistan’s Balakot pushed the poll narrative firmly in favour of the BJP.

To add to that, a big part of the success story is Mr Modi’s strategic use of welfare politics. The PM created multiple touch points with some of India’s poorest citizens through a slew of government welfare schemes like Pradhan Mantri Ujjwala Yojana, Pradhan Mantri Awas Yojana, Swachchh Bharat Abhiyan, Ayushman Bharat and many others. These delivered rural assets — houses, gas cylinders, toilets, electrification and health insurance.

The politics of welfare is not a new idea in India, nor does it guarantee victory. The Congress also had a welfare story to tell in 2014. But it lost. Corruption and implementation glitches in UPA’s second term certainly muddied the narrative, but there is something else that is critical.

Mr Modi did a few things that leap out. He focussed relentlessly on packaging, personalising and publicising schemes in a way that hugely enhances Brand Modi. He became a brand ambassador of the schemes he promoted. There is a photograph of Mr Modi personally distributing free LPG connections in Balia, Uttar Pradesh, in 2016 when the scheme was launched. Last year, Mr Modi interacted with Ujjwala beneficiaries across the country through a video conference, where he said 69 per cent villages across the country now had 100 per cent LPG penetration, while 81 per cent villages had more than 75 per cent LPG penetration.

He did not stop with the video conference. He went on to Twitter and said: “Ujjwala Yojana has strengthened the lives of the poor, marginalised, dalits, tribal communities. This initiative is playing a central role in social empowerment. LPG panchayats are being held across India, where key information regarding Ujjwala Yojana safety measures are discussed.”

The key word here is “empowerment”. Mr Modi framed the gas cylinder scheme not just as something that would reduce indoor air pollution but also empower the poorest.

Mr Modi has sold the scheme to millions of poor Indians not just as about toilets but also about dignity, especially for women, who would otherwise have to go out to the field.

The Prime Minister did not come up with too many novel ideas. Many of his flagship schemes were repackaged/modified versions of what the UPA government had done in the past. But the Modi government was clever enough to realise that in a country where more than 50 per cent of the population is below the age of 25, not everyone knows or remembers what had happened in the past.

Undoubtedly, the picture on the ground isn’t as rosy as Mr Modi’s publicity campaigns made out; there are many gaps in implementation. For example, many Ujjwala beneficiaries have gone back to using firewood as cooking fuel after the first cylinder got over, or use both simultaneously.

The Swachchh Bharat sanitation campaign is in many ways a continuation of the UPA’s Nirmal Bharat Abhiyan. And Mr Modi’s campaign faces many of the challenges that its predecessor had to confront. Toilets have been built but are not always used for the purpose they were established. Then there are the all-too familiar water supply problems and “insufficient door-to-door social campaigns of public health information and awareness”, as economist Pranab Bardhan has noted.

But Mr Modi got the optics right. He brought toilet talk to the high table. “A clean India would be the best tribute India could pay to Mahatma Gandhi on his 150th birth anniversary in 2019,” the PM said as he launched the mission at New Delhi’s Rajpath on October 2, 2014.

The Congress failed to effectively showcase its landmark achievements like MGNREGA and the National Rural Health Mission (NRHM). The NRHM, launched in 2005, sharply improved reproductive and child health in the country. Institutional delivery went up hugely due to Janani Suraksha Yojana, started by the UPA. A whole cadre of frontline workers — the accredited social health activists (Asha) — came into being. But when did you last hear the Congress marketing these loudly?

Where the BJP scores big time is in its outreach machinery. Let’s face it. There was hype, but many people did benefit from Mr Modi’s welfare schemes. His ground game was far superior. The BJP used the famous Gujarat election model of “panna pramukh” to target voters during the 2019 general election. The party appoints what they call a “pramukh”, who is given a list of 8-12 families and is then asked to ensure that these families vote for the BJP and get others to vote BJP.

In contrast, the Congress couldn’t create a buzz over its welfare schemes, including the Nyuntam Aay Yojana (Nyay) it promised during the 2019 campaign to five crore “poorest families” covering 25 crore people by assuring them a minimum income of `6,000 per mont.

The BJP cadre created a buzz around Mr Modi’s welfare schemes by micro-messaging, and reaching out to individual beneficiaries directly since last year. And Mr Modi’s “welfare cool” harnessed the power of the social media. The welfare schemes are splashed all over YouTube, Instagram, Twitter etc. The portal https://www.mygov.in/ has real-time updates on flagship programmes, there are video testimonials from those who benefited from the welfare schemes and Union ministers were told to blog about the progress their ministries have made in 48 months.

Everyone has not benefited from Mr Modi’s welfare schemes yet. But rightly or wrongly, those waiting for the schemes to reach them believe it will happen soon. The key takeaway — the need to create that vital emotional connect which goes beyond data and taglines.