As chaos prevails and the region gets further destabilised, undoubtedly borders will get erased 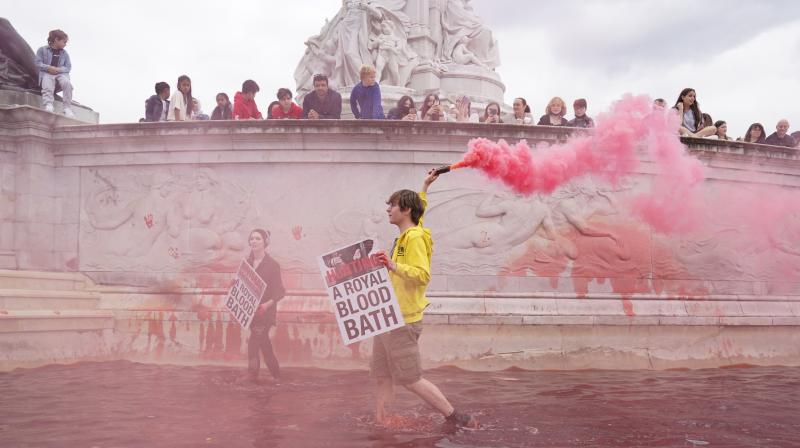 The 'XR' activists were joined by 'Animal Rebellion' activists who went on to pour red colour in the iconic fountain outside the Buckingham Palace gates. (Twitter)

Everyday we face news about Afghanistan: about people being attacked, threatened, being forced to leave the country they belong to, and love. About divided families. About traumatised children. About women and the atrocities inflicted on them.

Those of us familiar with the fallout of the Partition of India (and our team which has set up the Partition Museum in Amritsar, Kolkata and now in Delhi, certainly is) — know this is what happens when people are divided, by force. The largest migration in the world, which took place in 1947, was suddenly announced and led to immense tragedy and killings.

This is reflected in Afghanistan today.

Unless plans were in place — and people were evacuated over a period of months and not days — this was bound to happen. And as we can see — it is the thugs of yesterday and the terrorists of today who take advantage of the innocent. Those who still don’t understand the bloodshed of 1947 — can find in Afghanistan a reflection of what happened in India 75 years ago.

But at least many among the Afghans who want to migrate are being helped by the airlifts of the superpowers. In India at the time of Partition — unless there were some proactive local officer, or well connected benefactors — people were left mostly on their own.

As chaos prevails and the region gets further destabilised, undoubtedly borders will get erased. One border that looks increasingly fragile is between Afghanistan and Pakistan, as refugees flee across, around 20,000 daily.

On the other hand, of course more than 14,000 refugees have entered the UK, legally and are being given protection. The process continues — and already over 500,000 Afghans have left their country, trying to find safe refuge, in different parts of the world.

But to reiterate the incredible generosity of the British: at least 10,000 hosts have registered with a charity to open up their spare rooms for refugees. This will be only a temporary stay of course, but it will help immensely help those who have lost everything.

London rocks with rebellions! And “Extinction Rebellion”, in which people occupy public spaces, just shows the extent to which people take climate change seriously! This time they occupied Trafalgar Square, blocked traffic and definitely got noticed. It is more or less the strategy followed by the farmers in India — except here they are allowed straight into the city centre. They were protesting against the use of fossil fuels and managed to sit right outside the department for business, energy and industrial strategy.

The “XR” activists were joined by “Animal Rebellion” activists who went on to pour red colour in the iconic fountain outside the Buckingham Palace gates. This, according to them, symbolised “blood” on the Queen’s hands, as she had allowed her the Crown lands to be used for hunting as well as animal farming.

These protest programmes certainly cause immense disruption — but then that is the whole idea of civil disobedience. Interestingly, the “XR” group does feel that their message of saving the planet is getting across more widely. But whether they will be able to stop policies of “road building” or encourage the Queen to grow “healthy food” on crown lands for the country is doubtful. In the meanwhile, we have been subject to dramatic red colour floating in the fountains at the foot of the palace, as though a murder had just taken place. Disturbing! Just as the activists wanted!

Jabbing children between the ages of 12 and 15 years might be next on the agenda as a means of controlling Covid in schools. Not all parents are enthusiastic, though, as results from other countries that have vaccinated young children are still awaited. However, the government might allow children who want Covid jabs to get them without parental consent. This, of course, could lead to unforeseen consequences… but right now no one is thinking of that. Another key change could be that children would be vaccinated at the schools, rather than in GP clinics. Surveys have also shown that most 10- to 17-year-olds are really keen to get vaccinated.

But more information and transparency is often required before one feels completely safe with any vaccine. For instance, there is still not much knowledge about the India-made Covaxin here nor is it recognised. The long-delayed clearance from WHO has created an impediment for students and business travellers from India who had taken the vaccine on the assurance that it was only a matter of time before it was put on par with the Pfizer and the Moderna vaccines. One hopes that the approval from WHO will be fast tracked. It will not only provide relief in an already challenging environment for education and jobs abroad, it will also be a step in the right direction in boosting the “Made-in-India” campaign.