Domestically, India must block all attempts at radicalisation and promote Sufism and Kashmiriyat 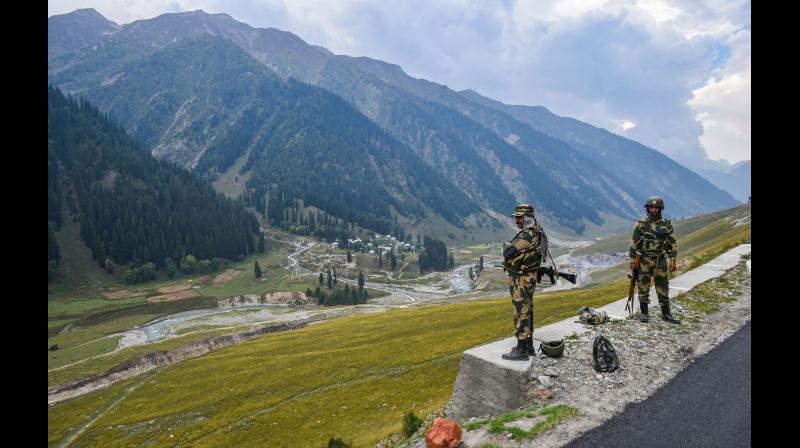 While no change is being suggested on the LoC, we need to think of how to re-purpose the Army’s involvement in J&K. (PTI)

The whole world is watching Afghanistan. Will the Taliban be able to deliver a stable government? Will they be able to feed the people, and deliver development, economic growth and social justice, especially women’s rights? How will they deal with the international community? More importantly, will the global community respond with tolerance and assistance?

And yet, can the world afford to be indifferent? It has to ensure that Afghanistan does not become a nursery to export terror to the world. Pakistan plays a key role in guiding the current dispensation in Afghanistan. Its own role in exporting terror is well-known.

India is one of the closest neighbours of Afghanistan. Our connection with Afghanistan is deep-rooted and ancient. India enjoys a relationship of trust with the Afghans. It has also invested up to $3 billion in the country over three decades without seeking anything in return.

Nevertheless, the security situation there concerns us directly. Three decades ago when the Soviet Union was driven out of the region, Pakistan redirected the terror stream from Afghanistan to Jammu and Kashmir across the line of control (LoC). Today, the lines of terrorist operations may run through the whole country, it is feared.

In the late 1980s, India was experiencing one of its weakest moments. Politically, we had a weak coalition government. Economically, we were at our lowest ebb; we had to ship our bullion out of the country. Militarily, we were heavily invested in Sri Lanka and Punjab, in addition to the Northeast. It is in this backdrop that Gen. Zia ul-Haq launched his proxy war of “a thousand cuts” as propagated by military exercise, Zarb-e-Momin.

Even at a tactical level, as terrorist trouble started breaking out in Kashmir, the Indian Army deployment at the LoC was overstretched. The militancy would last for decades. A decade later, terrorism would go global with the attack on the Twin Towers.

Compare that with the situation today. Taking it in the reverse order, tactically, we have a robust security grid in the heartlands and a strong anti-infiltration posture, replete with an LoC fence augmented with sensors and enablers. India has raised an over-60 battalion counter-terrorism force, the Rashtriya Rifles. The Indian economy is robust, although given to global sensitivities. And politically, we have a strong government that does not shy away from taking bold decisions. Yet, we cannot afford to be complacent.

In addition to the Hizbul Mujahideen and others, India must also watch out for Islamic State and Al Qaeda influences. Their effort will be to recruit disgruntled youth. We must ensure that we don’t provide a breeding ground. It merits mention here that Pakistan, too, is wary of “Caliphate” influence. Therefore, we should do all that is possible in diplomatic and related terms to create terrain friction for the Afghan-based terrorists throughout the length and breadth of Pakistan that separates India and Afghanistan. As Pakistan stares at likely isolation, for instance in the form of the cancellation of the New Zealand cricket tour or consideration for the FATF black list that has come to haunt it every year, India needs to ensure that Pakistan’s role is highlighted in every forum, as was done in the United Nations General Assembly.

Domestically, India must block all attempts at radicalisation and promote Sufism and Kashmiriyat. Our security measures should be seen as first aid only. It is crucial that we focus on bringing about a change in the minds of the youth. That will not be easy.

The aspirations of the youth have to be met in terms of growth and opportunities. Participation of the private sector is crucial.

Over the last two years, since Article 370 was rendered inoperative, the central government has made significant strides in delivering development to Jammu and Kashmir. Investment proposals worth Rs 20,000 crores have been received in sectors ranging from information technology, defence and renewable energy to tourism, hospitality, education and infrastructure. The AIIMS, IIT, IIM and 50 other new educational institutions are being set up there. Jammu and Kashmir has achieved 100 per cent household electrification and 53 per cent rural households have access to drinking water, which is a little better than national average of 51 percent. But the hurt caused by the dilution of Article 370 and the division of the state into two Union territories persists.

A three-tiered panchayat is in place, which has empowered people at the grassroots. When the time is right, the political process will take effect. As security improves in Kashmir, is it also time for the Army to disengage in J&K? While no change is being suggested on the LoC, we need to think of how to re-purpose the Army’s involvement in J&K. Perhaps, the police and the Central Armed Police Forces can gradually take over security responsibilities in the interiors. It will be a leadership call as to when that can happen, but it is important to start planning so as to get the transition right. Articulating such a disengagement strategy will go some distance in assuaging hurt local sentiments.

It will not happen in a hurry. What has happened over three decades cannot be undone overnight. Maybe a generation or two will pass. But the time to start moving towards that was as of the day before yesterday. So today we must accelerate the steps so that we can deny the other side a breeding ground for ultra-fundamentalist violent ideologies.