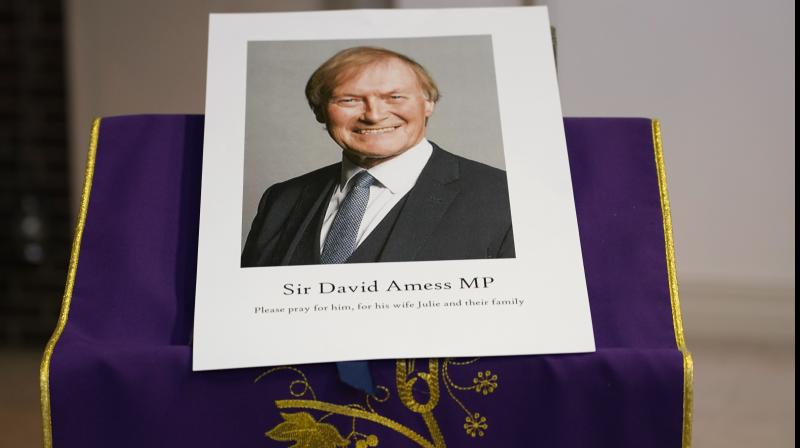 The inquest into Amess’ death is yet to take place, but there is no doubt that Ali’s motive was Islamist terror choosing a random MP as a victim for reasons that his warped faith dictated. Representational Image. (AP)

“O Bachchoo life is a heart-warming fire
With comforting burning black coals
Or maybe my yaaron it’s a long dog’s walk
With too many telegraph poles
Or Bachchoo is it but a journey to endure
In shoes with worn-out soles?
--- O Bachchoo, it’s only a buttered crumpet
Delicious but full of holes...”
From The Book of Bachchoo Ka Adda Vol III

David Amess, Conservative Party MP, was stabbed to death on October 15 at a meeting with his constituents in southern England’s Leigh-on-Sea. Ali Harbi Ali, the young man of Somali origin who was subsequently arrested for his murder, walked into the constituency meeting unchecked and stabbed Amess several times. He made no attempt at anonymity. Amess’ team and paramedics attempted to revive the politician, but he sadly died of his stab wounds on the spot.

The inquest into Amess’ death is yet to take place, but there is no doubt that Ali’s motive was Islamist terror choosing a random MP as a victim for reasons that his warped faith dictated.

The police investigations have already ascertained that Harbi Ali planned to kill other MPs before he picked on Amess, but those plans were frustrated for one reason or another. The media, investigating Ali, have found that he was brought up in Purley, in South London, and was a popular young man in his school 10 years ago. He was a keen footballer, was friends with several of his classmates and showed absolutely no signs of extremist or death-cultist views at the time. Years after he left school he was, apparently, on the register of an organisation called Prevent, set up in 2011 to detect potential Islamist converts to terror and to attempt to dissuade them.

It’s now believed that Harbi Ali came under the influence of a jailed hate preacher called Anjem Choudhry and was enrolled, through the Internet and perhaps through contact with cells of Choudhry’s cult, in some scheme of faith-based murder.

I confess, gentle reader, that I have never understood faith-based conviction. Perhaps that’s a paradoxical assertion as understanding and faith are by definition opposed. I think it was C.S. Lewis who was asked why he needed the crutch of faith and he replied that he didn’t need the crutch, he needed the whole damned ambulance. I suppose he meant religious faith is a complete surrender to something outside reason. If, for instance, you “believe” that killing a worldly legislator will ensure you a place in heaven and eternal life, you might act upon it and be confident of enjoying such an afterlife.

The mystery for me is how one comes to such a belief. That’s the benefit, or some would say problem, with being a rationalist and wanting evidence for a belief or at least a conviction through one’s experience of the world, life and people.

Which brings me, gentle reader, to wondering about another recent and much-publicised case of a change or progression of faith. Michael Nazir Ali, the Bishop of Rochester in the Anglican Church, once widely tipped to be crowned Archbishop of Canterbury, has left the Church and has “converted” or progressed, as he puts it, to Catholicism. Christ Alive!

Nazir Ali was born in Pakistan to a Shia Muslim family. He converted to Christianity through conviction in Jesus’ teachings, gained through observing and coming under the wing of an Anglican missionary priest. He was prominent in his resistance to President Zia-ul Haq’s ordinance instituting Sharia law and tells a story about how he gave shelter in his church to Benazir Bhutto and a demonstration of feminist protestors against the Sharia, when they were attacked by the Pakistani police.

Now he says he is disillusioned with the Anglican Church’s pursuit of an agenda that he interprets as having nothing to do with Christ’s teaching. He doesn’t spell it out in great detail but he means the Anglican Church’s pursuit of worldly ideology with its assertion of “critical gender theory”. He asserts that he would rather follow the word of the Bible and that the world is too much with the Anglican Church. This sounds to me like “faith” in the teachings of Jesus Christ and living according to one’s interpretation of the word as pronounced in the Bible. He says nothing about a promise of eternal life, though the Bible certainly indicates, rather than maps out, the paths to heaven.

I admit to having wondered about my own faithlessness from an early age. Of course, one picked up convictions about society, about the unacceptability of poverty, exploitation, inequality caused by caste and rank; about history and politics -- and yes, it may even have crystallised into ideological convictions, but these were not matters of faith, they were matters that could be challenged.

Argument reaches a dead end when it encounters faith. I have heard close friends who believe in karma saying that the blind or the lame or children born with distorted bodies through their mothers taking Thalidomide deserved punishment for their acts in their previous lives. Hey Bhagwan!

And my closest childhood friend, a Parsi Zoroastrian, Dara Cama, who had converted to Catholicism, became a priest and spent years as a missionary in Bolivia. When he suffered from terminal tongue cancer, he refused chemo treatment, trusting in Mother Mary and Jesus, he said. He died in a Catholic hospice.

At his funeral, by the graveside, the priest asked me if I would say a Zoroastrian prayer. I did.