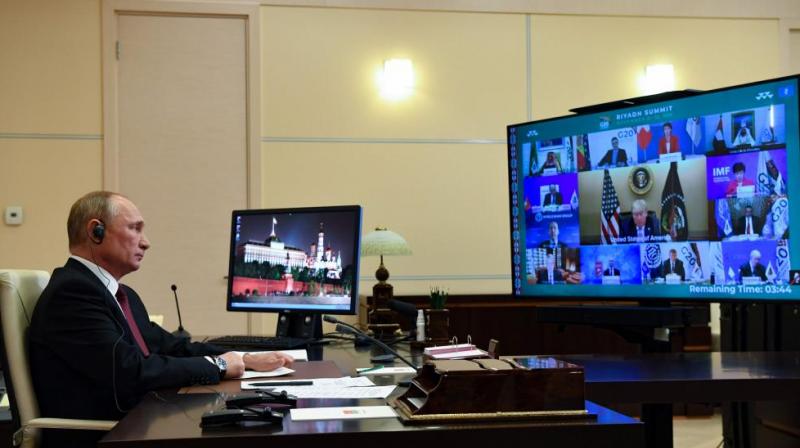 November has seen India’s participation in five virtual summits, starting with the Shanghai Cooperation Organization (SCO) on November 10 and ending with G-20 on November 22, with the Asean-India on November 13, East Asia Summit on November 14 and Brics on November 17. The raison d’etre of summits is to enable the principals to interact in person, enabling them to cogitate over matters of vital importance collectively, bilaterally and sometimes off the record informally. But a virtual meet over electronic waves addressing images of fellow leaders is an entirely impersonal platform. The question arises: does such virtual summitry serve any useful purpose.

Virtual summits do serve two objectives. One, to clear the annual calendar of meetings so the chain of summits remains unbroken; and the second, it enables countries to articulate their priorities and float fresh ideas to collectively address regional and global challenges.

In the summits, the primary focus was on the Covid-19 pandemic and ways to contain the virus and revive economic growth. India highlighted its efforts to support many nations by supplying medicines and medical equipment. Prime Minister Narendra Modi’s commitment to help make the Covid vaccine “accessible and affordable to all nations” was well received. With India’s recognised capacity to produce vast quantities of vaccines, this commitment is serious and will make a palpable difference to the mission of vaccinating billions of people at an affordable cost.

At the SCO meet chaired by Russia’s Vladimir Putin, Mr Modi stressed the importance of “reformed multilateralism” to meet the expectations of the world battling the social and financial impact of the Chinese virus. It was a wise call as nation states have no alternative but to work together. But the structures, processes and philosophy of both the concept of multilateralism and its practice across different institutions have a crying need for reform.

At the SCO summit Mr Modi expressed India’s firm commitment to regional peace, security and prosperity and against terrorism, illegal weapons, drugs and money laundering. India has high expectations from the Regional Anti-Terrorism Structure (RATS) based in Tashkent under the auspices of the SCO and recently sent an officer to work with RATS.

On November 12, Mr Modi addressed the Asean-India summit hosted by the Vietnamese Prime Minister. In his brief remarks, Mr Modi focused on the centrality of Asean in India’s “Act East Policy” and noted the importance of “a cohesive, responsive and prosperous Asean” for India’s Indo-Pacific vision. The choice of words is notable. Under Chinese pressure on economically vulnerable countries like Laos and Cambodia, the 10 Asean members no longer speak with one voice on critical issues like Chinese expansionism in the South China Sea. Asean, as a group, has also not been sufficiently proactive and responsive in meeting the multiple challenges posed by the pandemic.

Progress on physical connectivity between Northeast India and Thailand through Myanmar has been tardy, that prompted the PM to stress the importance of digital connectivity with Asean. The unpalatable reality is that huge investments on development of roads or multi-modal network between East India and Asean have little economic justification or even local demand from businesses or communities. It is an endeavour solely driven by strategic and diplomatic logic and must be financed by India without any expectations of significant returns.

In East Asia, issues of common concern include Chinese intrusion in SCS and terrorism. Both India and Asean leaders noted “the importance of promoting a rules-based order in the region, including via UNCLOS”. However, China’s shadow looms large on the region and the Code of Conduct for SCS being negotiated with China is likely to be a toothless document of pious intentions.

As Mr Modi spent Diwali with Indian soldiers at Longewala, Rajasthan, the East Asia Summit on November 14 was attended by external affairs minister Subrahmanyam Jaishankar. On SCS, Mr Jaishankar did not mince words and expressed concern about “actions and incidents that erode trust in the region”. In keeping with India’s restraint in multilateral fora, he refrained from naming China for its transgressions.

The Brics summit on November 17 was chaired by President Putin. This group of emerging large economies has lost much of its sheen and cohesion with tensions between India and China and economic stress in Brazil and South Africa. The leaders did make their statements which are unlikely to have much impact or outcome. Brics summits are rarely noticed by any international observer outside those from the member countries. If the India-China confrontation continues, Brics may also go into slow oblivion as the already-forgotten IBSA.

The G-20 summit hosted by Saudi Arabia was devoted to an “inclusive, resilient and sustainable recovery” from the pandemic. Mr Modi emphatically proposed a shift of emphasis from mere growth to the welfare of human beings. His call for talent, technology, transparency and trusteeship will resonate widely in distant capitals. On terrorism, the G-20 declaration supported the FATF to combat money laundering and terror financing.  Ironically, China’s Xi Jinping urged all to bridge their differences through dialogue and resolve disputes through negotiations!

It is fair to conclude that virtual summits are ritualistic with forgettable outcomes. Even in normal times, most summit declarations are long and verbose, lacking focus and urgency. In the post-Covid world, it might be useful to revisit the ever-growing culture of summitry, clinically examine their usefulness and inject fresh energy into the process.