Opinion   Columnists  31 Mar 2020  Atlas shrugged: All it takes is a zombie virus to stop our world
Opinion, Columnists

Atlas shrugged: All it takes is a zombie virus to stop our world 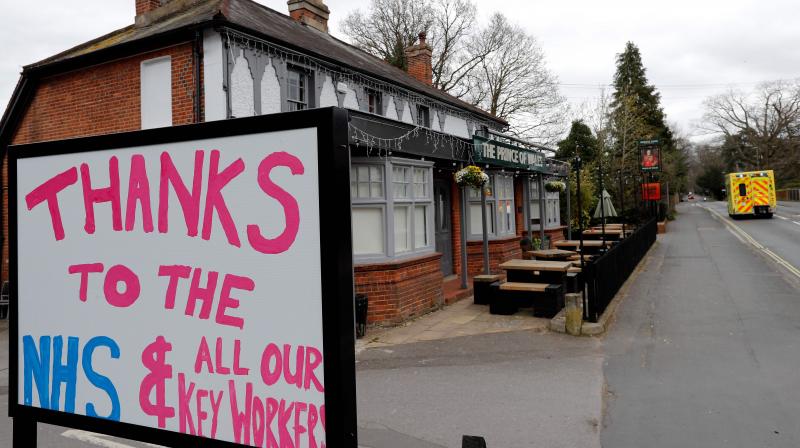 The Modi virus is catching. Learning from the banging of drums and clapping at the end of the curfew in India last Sunday, not just London and the young royals George, Charlotte and Louis, but all of UK cheered and banged the drums and set off firecrackers at 8 pm last Thursday to pay tribute to the healthcare workers who are at the frontline of the battle against the new coronavirus. We are finding out that even our wonderful NHS doesn't have enough protective equipment, or testing kits or ventilators. But six lakh people have volunteered to help out in the health service that says something about who is really loved by the people. All the homeless who sleep rough on the pavements have been promised that they will be rehoused by their local authority over the weekend. That's the true charitable spirit that binds the British in the face of all crisis.

We are under lockdown or curfew, social isolation or whatever you call it. The law is harsher than it used to be during the World War. Never before, as Boris said, have pubs been shut, robbing the free-born Brit of his birthright to have a pint. Streets are deserted and cinemas and theatres have been shut. (Some theatres are streaming the films of their performances.) Police have the power to fine people found loitering outdoors and drones are flying above to detect any wholesale flouting of the order to stay indoors.

When the news broke that Prince Charles has tested positive for the virus, it came home to people that no one is immune. (Though they complain that how come he can get tested and NHS workers cannot.) The Queen has decided to go to Windsor along with her husband to socially isolate themselves. No one is above the law. Not even the VVIP... Of course, there were jokes that finally Prince Charles has been coronated .

And now the news is that Boris Johnson has tested positive and Matt Hancock, the health secretary as well as the chief medical officer! Whatever next? One can only hope that the people who were with him — Cabinet colleagues, civil servants, his pregnant girlfriend — all test negative.

As it is, the Cabinet meetings are online with video equipment. Even the daily 5 pm press briefing is online for journalists who want to put questions to the government. Most civil servants are working from home. Even those parliamentarians who were technologically challenged are telling each other about Zoom and other devices to take part in remotely conducted debates. On Mother's Day last week, many grannies said hello to their dear ones online. It has been the fastest rate of modernising for the Baby Boomer generation. Rumours are that when we reconvene Parliament, they may facilitate participation from a distance. How will the speaker know anyone is listening when he says Order Order? The only problem is that an online parliament may get hacked into, and suddenly everyone will be speaking Chinese or Russian...

Our TV screens have been occupied by (just labelled “Dishy Rishi” by the Times) Rishi Sunak, our young new chancellor of the exchequer, prominently. He has unveiled a new package of financial goodies every other day and still he faces demands to do more. He comes across as decent, concerned with the problems of the people and in control of the situation. Add Priti Patel as home secretary guarding the borders and telling the police to keep people off the streets and Alok Sharma the business secretary reassuring people about their jobs and their companies and you have to say that 50 years since the Uganda Indians arrived on England's shores, they have done their bit to integrate and contribute to their new home country.

But these are strange times. It is eerie seeing TV pictures of deserted streets. No one knows who has got it but has not been tested. Nor do we know how long the lockdown will be. If the numbers of people who have it and the number of deaths go up as they are doing (even more so in Italy) there is no telling what tomorrow will bring.

But as we all self-isolate and find books we have to read, and friends we need to talk to, and connect with our families (who have become more precious than ever), one wonders if there was ever another way to deal with this virus? Many believe both Boris Johnson and Donald Trump took too long to announce the lockdown. And jeopardised thousands of lives. Certainly as we see hospitals popping up in unexpected places today, it seems just the other day when we were astonished to see how fast the Chinese were creating these pop-up facilities. It is also just the other day when we were watching the lockdown in Wuhan and other places and were appalled that people could be quarantined in their own country. Surely rich, free nations would never be subject to it. Now we realise that all it takes is a zombie virus to stall our “powerful” world. The very thought is humbling. (On the plus side, writers like me are actually grateful for the lockdown so we can complete our books!)