Opinion   Columnists  31 May 2020  Bela Bhatia | Comfy India would do well to brace for Aakrosh, 2020
Opinion, Columnists

Will the simmering anger lead to aakrosh — a violence born from a virus of indifference? 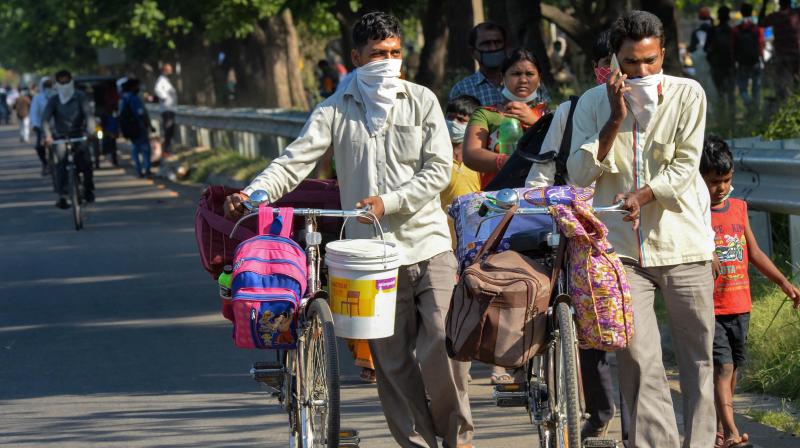 People of India are used to coping with natural disasters. But if they are made to endure a suffering which was avoidable — what then? PTI Photo

Aakrosh can be translated as anger but it is closer to rage — a burning rage that trembles with its own force, tumultuous and all-consuming. At the cusp of the seventies and eighties, in 1980, an ‘art film’ by this name was made to high acclaim. Directed by Govind Nihalani and written by Vijay Tendulkar and Satyadev Dubey, this ‘real cinema’ was said to be a commentary on rural India.

The film conveyed the dashed hopes of the swathes of landless for redistributed land, the undiminished power of the local ‘government’ of upper caste landlords, politicians and local police, and the feudal and patriarchal society they commanded with violence and impunity while labourers toiled like oxen in their fields and despite begari — free labour — remained in their debt and subjected to unspeakable indignities as a matter of routine.

Aakrosh, 1980, is the story of tribal Lahanya Bhiku and how his family is destroyed by the power, lust and violence of the local politician and his henchmen. Nagi, Lahanya’s wife, commits suicide after being raped. Lahanya is framed and imprisoned. A young lawyer, the only exception in an otherwise unresponsive district judiciary, impresses upon him the need to speak out: “If you don’t speak how will I help you?” But Lahanya maintains a stunned, stony silence.

Later, it is at the cremation of his father that Lahanya is allowed to attend that he breaks from his past. On grounds that mark death and endings, the rising flames of his father’s pyre behind him, Lahanya in a sudden move grabs an axe and heaves a blow at his young sister who is already being eyed lustfully. Unable to protect his loved ones, Lahanya had chosen to become an offender of a system that had turned predatory and let him down, though the violence of this final act also hurts his own.
Lahanya’s wounded self then cries out, repeatedly, full-throated piercing screams that rent the air.
Long after the last scene, it is the torment of the soul that takes the form of anger depicted so well by Om Puri as Lahanya that stubbornly lingers, dragging us into the abyss of Lahanya’s stunned, stony silence.

Aakrosh, 2010, is not a remake but it also deals with violence inflicted on the powerless; with nexuses in high places between politicians, businessmen, policemen and criminals; with fear of telling the truth and the severe repercussions that follow. The difference with Aakrosh (1980) is that the main protagonists are young CBI officials tasked with uncovering the truth about the disappearance of three youth and delivering justice, who are successful in doing so against all odds through legal process. They go a step further in surreptitiously arming the lone survivor of the victimised family, a woman whose tongue had been cut to stop her from telling the truth, and who uses the pistol on the three apprehended criminals — including the inspector of the local police station — and succeeds in killing them.

Like the rest of the world, the year 2020 has brought troubled times for India too. But India is not a homogeneous entity and the lockdown has not affected everybody equally. While many of us have become tired of sitting inside our homes, there are those who have not reached theirs. We have been hit by images of countless, who have been walking or cycling on the roads or stranded in places far away from home. We have been shocked by news of deaths like that of 12-year-old Jamlo Madkam who died a mere 14 kilometres from her home in a village in Chhattisgarh’s Bijapur district on April 18 after having walked a hundred kilometres in three days. Jamlo was part of a group of labourers who had gone across the border to Telangana to harvest chillis as they do each year. The figure of lockdown deaths is climbing up. On last count it was approximately 600.

Those of us who are in the happy position to observe — the comfortable class — are barely one per cent of the population. According to Prime Minister Modi himself, just 1.5 crore persons pay income tax. The number of tax-payers came down recently because the income-tax threshold was raised to Rs 5 lakh per year. So if we take Rs 5 lakh per year as benchmark of comfortable income, barely one per cent is above it — a tiny privileged minority!

In contrast, more than 250 million people (about 20 per cent of India’s population) were below India’s abysmal poverty line (“destitution line” would be a more appropriate term) in 2011. Many more must have been pushed into poverty by the lockdown. According to a recent survey by Azim Premji University, 74 per cent of poor households are already eating less than usual.

Aakrosh, 1980 and 2010, are about the anger — or rage — of an individual against the system but today we are provoking mass anger. A privileged minority has inflicted an extremely harsh lockdown on Indian workers, more than 90 per cent of whom work in the informal sector without any social protection. This has not only devastated the economy but also heaped endless indignities on them: hunger, overcrowded shelters, endless waiting and worries, and quite often — like Jamlo — a painful and dangerous trek over long distances to reach home. Already, there have been sporadic instances when hardships that the people have had to bear has turned to anger, as happened in Mumbai and Surat among other places.

People of India are used to coping with natural disasters. But if they are made to endure a suffering which was avoidable — what then? Millions of poor Indians are well aware of the economic and social inequalities that beset India for they have been contending with them for generations. In the films, innocent people (like Lahanya’s sister) bear the brunt once again, but for how long? What form will the discontent that the Indian masses are facing take remains to be seen.

Will the simmering anger lead to aakrosh — a violence born from a virus of indifference? What should we expect? A million mutinies now?