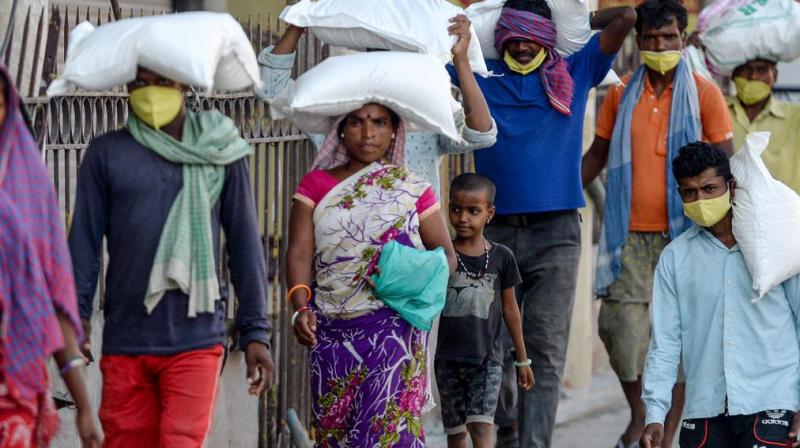 Solicitor-General Tushar Mehta’s comments in the Supreme Court have, predictably, stirred a storm.  For an officer of the court to go beyond his legal brief and question the bona fides of anyone seeking to raise the plight of the urban poor after the lockdown was unwarranted.

Mr Mehta would do well to remember that he is a representative of the government, not a spokesperson of a political party.

He may genuinely believe that those who are critiquing the consequences of the lockdown for its devastating impact on the vulnerable are “prophets of doom” and “vultures”, but his comments betray a basic lack of empathy for the humanitarian crisis at hand, a crisis that transcends political divisions.

It is good that the Supreme Court has finally intervened on behalf of the well-being of migrant workers.

But, essentially, this spat in a courtroom is a storm in a teacup held in the hands of the relatively privileged. Whatever their transient political adversity, they and we are all complicit in a socio-economic structure in which the welfare of the millions of the poor, living in the crevices of our great urban sprawls, was ignored or taken for granted.

Under the shadow of the glitzy malls, the upward mobility of middle class Indians, and stories of India’s emergence as a global economic power, there was the harsh truth of millions of the poor hovering precariously just above levels of absolute poverty, living in unlivable slums, part of an unmapped unorganised sector, bereft of a social safety security net, and eking out a living from one meal to another.

The unintended consequence of the lockdown has been the great discovery of these poor. Hitherto, they had remained invisible, hidden in their miserable burrows, but available to provide service when required for the beneficiaries of the “India success story”.

The quality of their lives, the history of their migrations from village to city, the miserable slums in which they lived, and the sheer fragility of their economic survival, was not something that bothered any of us too much. The lockdown was a revelation, both for the government, and for the privileged, of this “other” India, living cheek by jowl with our insulated worlds.

Who is to blame for this flawed and utterly insensitive socio-economic order?  The Opposition can blame the government, and it is true that some of the criticism is valid.

The manner in which the draconian lockdown was announced, with just four hours of notice, and the period for which it was announced, left no option for the millions of these poor to make themselves visible, for they had suddenly been rendered homeless, jobless and penniless.

They began their long trek home, back to where they had come from in search of a tenuous living. Since all public transport was shut, they began to go back on foot, walking hundreds of miles, using any means of transport, hungry, thirsty, with blisters on their feet, and at the mercy of the police.

It took the Central government 36 days to reopen train services, and that too in a haphazard manner, where money was charged for tickets and health clearance.  Some believe that it was a larger human migration that that during the 1947 Partition of the subcontinent.

But are those blaming the government entirely blameless?  The Congress Party has been in power for decades. What did it do to remove or reduce this inequity?  The 1991 economic reforms ushered in by then Prime Minister P.V. Narasimha Rao and his finance minister Manmohan Singh have been rightly hailed for turning the economy around.

The higher growth rates they ushered in for the next decade and beyond transformed important sectors of the economy.  It was bonanza days for the Indian middle class, but even as employment increased, and consumer spending multiplied, no one cared too much about the continuing and inherent inequities in the system. As malls mushroomed, so did slums.

It did not require a lockdown to reveal that outside the sylvan surroundings of Lutyen’s Delhi, where economic reforms were hailed and government achievements were pompously touted, 49 per cent of the capital of the Republic was officially a slum, an area defined by the Census as not worthy of human habitation.

Schemes like MNREGA are not a solution to the fundamental problems of raising incomes and providing employment with dignity. They are an essential but short-term relief measure, not an answer to foundational malaises.

What agriculture needed was quantum investments in irrigation, better agricultural extension services, new and better seeds and fertilisers, increased warehouse and cold storage facilities, better road connectivity, more effective R&D inputs, and above all structural reform, like the ones initiated now, of changes to the Essential Commodities Act and the Agriculture Producers Market Committee Act.

The confrontation between Tushar Mehta and Kapil Sibal is thus really an altercation between two beneficiaries of the system pointing fingers at each other about who upset the happy apple cart over which both presided.

Except for the fact that the country’s highest court has now intervened, it makes little difference to the plight of the poor, even as governments come and governments go.