Sanjaya Baru | Flux in Centre-state ties with breakdown of trust 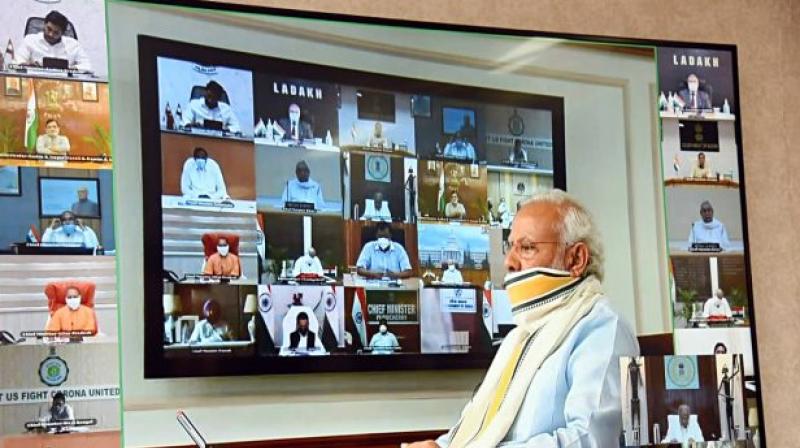 Narendra Modi’s imperious manner as Prime Minister contrasts with his attitude towards the Central government as the chief minister of Gujarat and his promise of pursuing “cooperative federalism”. (ANI)

An outstanding address to the Goods and Services Tax (GST) Council by Tamil Nadu’s finance minister P.T. Rajan, a contentious interaction between Prime Minister Narendra Modi and West Bengal chief minister Mamata Banerjee and the questionable remarks by V.K. Paul, a member of the Niti Aayog, blaming state governments for the mess over the Covid vaccination strategy once again draw attention to the sorry state of Centre-state relations today. Mr Modi came to power in New Delhi in 2014 promising to adopt “cooperative federalism” as his watchword. Seven years into office he is reminding many people across India of the Indira Gandhi era when the Centre rode roughshod over the states.

The Indira-Rajiv era of unhappy Centre-state relations was challenged by several powerful chief ministers, including Jyoti Basu, N.T. Rama Rao and M. Karunanidhi. The Centre is a conceptual myth, declared NTR, who in the early 1980s emerged as a stout defender of the rights of state legislatures and state governments.

Seeking to retrieve the trust of provincial political leaders, Indira Gandhi appointed the Justice Sarkaria Commission on Centre-state relations in 1983. Every time that Prime Minister Manmohan Singh had problems in dealing with state governments he would, in jest, recall NTR’s assertion and remind himself of Justice Sarkaria’s views.

In the quarter century from 1989 to 2014, successive PMs had managed Centre-state relations within a framework of consensual politics. Prime Ministers P.V. Narasimha Rao, Atal Behari Vajpayee and Manmohan Singh maintained excellent personal, political and administrative relations with all the chief ministers, irrespective of their party political affiliation.

Against this background, it is disconcerting to hear the Tamil Nadu finance minister speak of “a deterioration of the ‘relationship of trust’ between the governments of the Union and the states”. It was even more worrisome to see a photograph of a scheduled meeting between the PM and the West Bengal CM in which the PM was seated at the head of the table and the CM and other officials, including the Leader of the Opposition BJP in the state Assembly, were required to be seated along both sides of the table. In the event, Ms Banerjee chose not to attend the meeting.

During his first term in office, Prime Minister Manmohan Singh travelled to many state capitals to chair meetings with state CMs and their ministerial colleagues and officials, often accompanied by the deputy chairman of the Planning Commission and senior Central government officials. The seating arrangement always had the PM and his team seated across the table facing the CM and his/her colleagues. It was a gesture of respect that built trust. These meetings were meant to discuss the implementation of various Centrally funded projects at the state level. The Centre has the money, but it is the states that implement all the projects and programmes. A cooperative relationship between the two is essential for good governance in a quasi-federal administrative system like that of India.

The “deterioration in the relationship of trust” that the Tamil Nadu finance minister spoke of contrasts with the environment of trust and mutual accommodation that former finance minister Arun Jaitley referred to when he addressed a special midnight session of Parliament launching the new GST system. The late Arun Jaitley paid handsome tribute to three state finance ministers affiliated to political parties that opposed the BJP -- Thomas Isaac of Kerala, Haseeb Drabu of Jammu and Kashmir and Amit Mitra of West Bengal -- for their cooperation and contribution to making the introduction of the GST possible. Jaitley’s consensual style, which he learnt at the feet of Prime Minister Vajpayee, served the nation well.

Narendra Modi’s imperious manner as Prime Minister contrasts with his attitude towards the Central government as the chief minister of Gujarat and his promise of pursuing “cooperative federalism”. When Ms Banerjee objected over not being allowed to speak during the PM’s interaction with district magistrates, BJP spokespersons chided her for speaking out of turn. This incident reminded me of what used to happen at New Delhi’s Vigyan Bhavan during chief ministers’ conferences during the first term of Dr Manmohan Singh. Mr Modi would step out of these meetings to address a group of select media people, summoned by the CM’s staff, in the lobby of Vigyan Bhavan. Ms Banerjee may well have learnt from that example of how a CM could upstage a PM at a national conference.

Whatever the banter and the normal party political differences, the fact is that such interactions between the PM and CMs were usually cordial and businesslike during the tenures of consensual PMs like Narasimha Rao, Vajpayee and Dr Manmohan Singh. The current phase of discord and distrust must be brought to an end if India’s political leadership as a whole has to deal with the challenges of the Covid-19 pandemic and to restore momentum to the economy.

Neither the management of the pandemic and the vaccination drive nor the challenge of fiscal stabilisation and restoration of growth momentum can be handled by the Central government alone. The citizen demands a rational and efficient vaccination programme, a humane and competent healthcare administration and revival of economic growth, employment opportunities and confidence in the medium-term prospects of the economy. The bizarre games of political one-upmanship, the consequent weakening of federal institutions and systems and the mutual blame game between politicians at the Centre and in the states does not serve the interests of the citizen and the nation.

India has lived through many crises and it has recovered speedily when the Centre and the states have shared a spirit of cooperative federalism. Any excessive politicisation of federal governance does no good to either pandemic management or economic revival, nor indeed to an overall improvement in the welfare of the citizen. A prolonged period of political grandstanding and continued tensions between the Centre and the states has already adversely impacted governance and economic development. In the event, the nation needs a renewed commitment to cooperative federalism as defined by the principles of the Constitution.