Opinion   Columnists  31 May 2022  Aakar Patel | Failure of India’s bureaucrats to stand up for what’s right is troubling
Opinion, Columnists 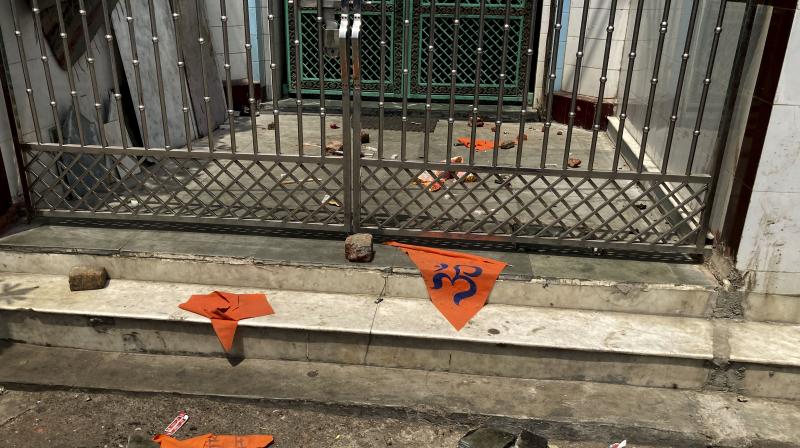 Saffron flags lie outside a mosque a day after communal clashes in Jahangirpuri, a neighborhood in northwest Delhi. (AP Photo)

Last month, a set of over a hundred retired government servants wrote a letter to Prime Minister Narendra Modi. The signatories included a former head of the Research and Analysis Wing (RAW) and a former national security adviser. They wrote that communal violence in India was “no longer just the politics of an assertive Hindutva identity, nor the attempt to keep the communal cauldron on the boil — all that has been going for decades and in the last few years had become a part of the new normal. What is alarming now is the subordination of the fundamental principles of our Constitution and of the rule of law to the forces of majoritarianism, in which the State appears to be fully complicit”.

These people, the IAS, IPS and IFS officers, wrote that they believed the threat to India was unprecedented. and that “it is the unique syncretic social fabric, which is our greatest civilisational inheritance and which our Constitution is so meticulously designed to conserve, is likely to be torn apart”. They added that the Prime Minister’s “silence, in the face of this enormous societal threat, is deafening”.

It is difficult to disagree with what the letter said because it has been said before and in any case that is not the point I am making here today. In response, another set of over 100 retired government servants wrote in support of Hindutva politics and accused the signatories, which again it should be noted included a former head of RAW and a former NSA, of being “anti-national”. This second letter had no structural response to what was being alleged, except to wave it off as being “anti-Modi”.

This is to me more interesting and it is a reflection on the state of our civil services. It has almost nobody from within questioning what is going on in India today. I can think of only two IAS officers who quit the service in protest against what the government was doing. One is the young officer Kannan Gopinathan, who resigned in protest against the restrictions on Kashmiris in 2019. The other one was Harsh Mander, who resigned in 2002 over the Gujarat pogrom.

Two officers over 20 years is all I can think of. Perhaps there are others, and I accept that I may have missed some, but there cannot be many. It appears that for the rest, either they approve of what is going on in the government they work for, or they disapprove but carry on anyway for other reasons, or they are immune and do not care what the government does.

This is not a minor issue and is a reflection on Indian morality. It means that the entire bureaucracy is fine with the violence against minorities catalysed by the State. And that they are fine with eccentric economic policies that devastate the lives of the vulnerable and the poor, such as taking away their currency notes (which surely was also a matter over which there ought to have been resignations). Other things arise from here. Bureaucrats carry out orders. Meaning that those running bulldozers over the homes and shops of the poor without any backing of the law, and those who continue to destroy homes despite a stay from the Supreme Court (as happened in Jahangirpuri) are willing participants.

The brutalisation of Aryan Khan by one officer was acceptable to that officer’s colleagues and superiors because they gauged the wind and found that the government wanted this persecution.

A report in a national newspaper headlined “Cruise drug raid case: One officer went rogue, agency looked other way” says the following about the case: “The SIT’s internal report says: ‘It is strange to note that in spite of clear cut denial by Arbaaz (Merchant) -- Khan’s friend from whom a small amount of charas was seized -- regarding the involvement of Aryan in procurement or possession of drugs, the Investigating Officer started looking at WhatsApp chats of Aryan without even formally seizing his mobile phone. It appears the IO was motivated to somehow implicate Aryan Khan in the drug case.’”

Why did the department and his colleagues not stop this “rogue” officer from implicating an innocent man while the entire nation was watching for weeks? And while the media and the BJP government thoroughly demonised him.

The answer is again that they either approved, or disapproved and refused to intervene, or they didn’t care. Such total absence of ethics in an agency with sweeping powers to destroy lives is troubling and frightening. But it must be examined.

So many of our ugly features have been exposed in recent years that this one has escaped notice or has not been commented on as much as it should have been. We do not appear to have the internal resistance that a democracy must-have. When one of its branches begins to malfunction (or “go rogue”), the rest of it must step in. The Americans call it “checks and balances” and it is the ability of the judiciary, legislature and executive to ensure that one of the three doesn’t overstep. This system necessarily presumes that it is the individuals inside the system, the judges, the civil servants, the administrators and the elected, who will step up when they see something problematic. It appears to have worked for the United States. It is not working for us. This is clear. We must ask ourselves why there is such an absence of ethics and personal responsibility in the “world’s largest democracy”.