Shikha Mukerjee | Parl as a battleground: Does disruption help govt or Opp? 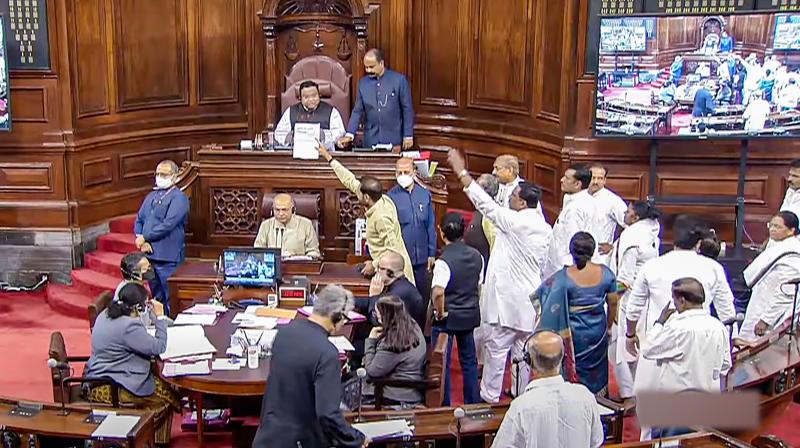 The two Houses of India’s Parliament were meant to be a battleground, because that is the essence of the type of democracy that the founding fathers of the republic enshrined in the admirable Constitution.

Reduced to the simplification of a cliché, it means that the two Houses, particularly the Lok Sabha, really belong to the Opposition. The purpose of the Opposition, as its accurately descriptive name reveals, is to hold responsible and accountable the ruling party and its government and its touch-me-not leaders, from the Prime Minister to its junior-most appointee. The disruption of parliamentary proceedings in the first week of the Monsoon Session was pre-ordained.

Every engaged observer of politics in India, from the archetypal “average man” holding forth, paper cup, glass tumbler or plastic cup in hand in the innumerable locations of “chai pe charcha” to elite corps derisively labelled as “Urban Naxals,” “tukde-tukde gang,” “anti-nationals,” to the “Khan Market gang” (an encrypted label that can be decoded only by the cognoscenti) waited for it to happen. The triggers were also well known, because the sheer provocativeness of two orders by Lok Sabha Speaker Om Birla on unacceptable and therefore unusable “parliamentary language” of everyday words like “corrupt”, “arrogant”, “asatya” (falsehood), “ahankaar” (arrogance), “abuse”, “hypocrisy,” “incompetent”, “ashamed”, “abused”, “dictatorial”, “anarchist”, “shakuni”, “dictatorial”, “taanashah” (despot), “taanashahi” (despotic/ domineering), and the banning of protests, dharnas, placards, sit-ins inside the precincts of Parliament, which means within the perimeter of the institution.

The “chai pe charcha” veterans also knew that there would be an uproar in Parliament. The list of issues keeps growing, sometimes exponentially. Sometimes the surge is fuelled by Prime Minister Narendra Modi’s masterly inaction on softening the impact of inflation and providing relief to an estimated 155-230 million Indians who have sunk below the poverty line as a result of rising prices of food essentials, the GST on branded and packaged muri-chira-yogurt, cooking gas, petrol, diesel and the ripple effect of it, rising unemployment and job losses – it is estimated that in June alone there was a cutback of 13 million jobs, the ever growing list of assaults of constitutionally-protected rights and the foundational value of the rule of law. At other times, the spreading politics of destruction of diversity, secularism, communalism that is the politics of exceptionalism, and the expansion of the State’s coercive powers through its various “agencies” and raids as part of the vendetta politics against the political Opposition, journalists, civil society activists, and even sanitation workers trigger a spurt in the growth of issues that keeps the conversation-discourse going at the chai pe charcha level.

Like all conversations in the public sphere -- from the marketplace where Socrates held forth and paid for it by drinking a cup of hemlock, to Narendra Modi’s monthly faux sermons, to the usual chatter of average Indians at tea stalls -- the subject is invariably tendentious. It is so because everyday reality is neither peaceful nor blissful.

In the bubble that power has created around the establishment system led by Narendra Modi and various BJP chief ministers, the experiences of increasing misery and impoverishment, inequality and injustice are excluded. In that bubble, Parliament is meant to function like a room full of good boys and girls, listening with rapt attention and applauding the leaders.

Elected as members of Parliament, every representative becomes part of an elite, with entitlements, privileges and prerogatives, based on precedent, norms and codes as well as laws and rules. The disruption of proceedings that brings the work of the Lok Sabha and Rajya Sabha to a halt, for a few hours or a day or more, is deemed to be an aberration.

The disruption of every session of Parliament in Mr Modi’s second term as Prime Minister by a more and more unified Opposition that has opted for agitation because it has found itself deprived of opportunities to question and debate the acts of omission and commission of the Modi government and the ruling party is making disruption almost the norm and uninterrupted proceedings the aberration. It raises the suspicion that both sides, both the government and the Opposition, have much to gain from the disruption.

Why else would parliamentary affairs minister Prahlad Joshi negotiate for a solution and then demand an unconditional apology from Congress leader Adhir Ranjan Chowdhury, who had already admitted his fault and apologised for his crass, allegedly unintentional slip of the tongue, when he addressed the 15th President of the Republic as “Rashtrapatni”? Why else would Congress president Sonia Gandhi have been heckled by a minister, Smriti Irani, as well as other BJP members? Why else would Speaker Om Birla have failed to suspend Union finance minister Nirmala Sitharaman for holding up placards and protesting inside Parliament, when he and his counterpart in the Rajya Sabha had suspended 27 MPs belonging to the Opposition for doing just that?

The disruption provoked by the ruling side is identical to the art of the double con games and heists made popular on Netflix. It keeps the Opposition at bay, shrinking the time available in the dismally shorter and shorter sessions of Parliament when seriously uncomfortable issues like inflation, job losses, unemployment, rising prices and lack of relief packages need to be raised. For the Opposition, disruption is the only

means available for justifying their presence, because protests amplify their message to a wider public.

Entirely aware of how disruption as a tool for amplification can be made to work for a small Opposition confronting a very large and repressive government, Speaker of the 14th Lok Sabha Somnath Chatterjee, formerly a member of the CPI(M), established Sansad TV, where “the information empowers the citizens to utilise their democratic rights diligently and be part of the democratic ecosystem”, was made available to every household in India. His logic was that “the awareness of citizens towards the working of members of Parliament in Parliament House helps in bringing awareness about various efforts of various stakeholders in the governance process”.

The live relay of the proceedings and the endless repeats of disruption incidents is politically damaging for the ruling establishment as it is profitable for the Opposition. The scenes of the BJP benches responding to the challenge does inform and create awareness among citizens, of how the ruling establishment works to block discussion and debate on issues that are embarrassing for Narendra Modi and his government. As long as there is Sansad TV, the disruption game favours the Opposition. Can Mr Modi risk blocking the telecast and admitting his failures?