Kishwar Desai | The latest ruse to meet people; e-cycles are the new rage in UK 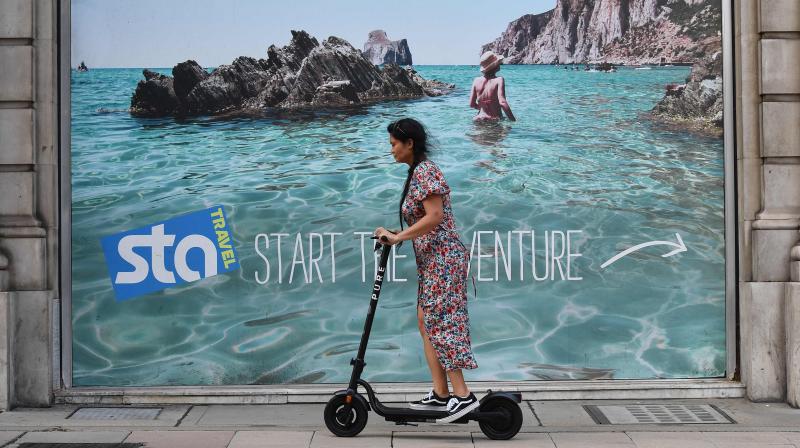 A woman rides a scooter past an advertising board outside a closed down branch of STA Travel near Victoria Station in central London. AFP Photo

There is always another side to the story — and right now it belongs to the anti-vaccine lobby — which was demonstrating in London over the weekend stating that the Covid-19 pandemic is nothing but a conspiracy by Bill Gates! None of the gathered 10,000 were wearing masks and for them there is no such thing as the killer virus either.

So what happened to those millions who died, and millions more who were hospitalised all over the world? Were they somehow brainwashed by the vaccine makers into making themselves sick? It would be difficult to find a more adamant bunch of Brits, whose opinions trump over scientific research (pun intended!).

But they can be understood, if we place them next to the flat-earth lobby, or anything else that seems an inexplicable denial of everything that is happening in the real world. We can only hope that their mingling in large crowds as they protest and ask for a return to “normal life” will not lead to a spike in the virus — while the rest of us continue to ‘social-distance’.

Another lot of demonstrators are also going be out and about soon — the Extinction Rebellion — which is an environmental movement and is having its demonstration, too.

If it is anything like their demonstration last year, any traffic movement will be impossible in Central London and that is not a bad thing either. Is this the latest way to hang out with buddies — organise a demonstration?

I never imagined that we would actually hope for colder weekends. We are thankful that the August bank holiday weekend threatens to be a cold one. Well, hot summer weekends mean no distancing, traffic jams on country roads and crowded beaches.

Then that in turn leads to a revival of Covid infections. We need some stay-at-home cold days and nights to slow down the pandemic.

The latest data show a sharp upsurge in new cases, highest since June and in four figures. Whether this will stay next month or is just a blip is anyone’s guess. September is crucial because schools reopen.

There has been a battle going on between the government, which wants schools to open, and the teachers’ union, which is asking for guarantees about safety.

The Prime Minister, Boris Johnson, keeps changing his mind — but now it seems he has decided to follow the practice in Scotland where a sensible compromise is being worked out about masks and distancing and bubbles.

The UK government writ runs only to England in Corona matters and the devolved authorities Scotland, Wales and Northern Ireland are doing much better. But while the government led by Boris would like people to come back to work — not all companies agree and some City financial firms are happy to let their workers stay at home.

Tube trains will have to be monitored for distancing. Many are buying e-cycles that allow them to speed fast and effortlessly to work. How London traffic will cope with bicycles as well as e-cycles remains to be seen!

This is the season for the Proms. It is a high point in the transition between summer and autumn. It is a musical feast in the splendid location of the Royal Albert Hall. Day after day famous composers and singers and soloists perform divine music, which is broadcast on the BBC which sponsors the programme.

If you want a seat you have to wrangle it from those who have bought seats permanently but may let you have it for a night for a hefty price. If not, you stand at the back as part of the promenade.

On the final day of the Proms, the climax comes with the playing of Land of Hope and Glory and,of course, Rule Britannia with many standing at the back waving Union Jacks and singing a raucous chorus.

All around the country people gather in open places and parks and gardens and sing along with those in the Royal Albert Hall. This has led to some light-hearted displays of patriotism.

But now it seems BBC is not sure it is culturally appropriate to celebrate the past as it is associated with Empire and slavery.

The culture war, which has been going on since Black Lives Matter erupted four months ago, has still not abated. So the BBC has proposed that the music will be played but no singing of the lyrics.

You can just imagine what that has done. As it is the BBC is in trouble. It is financed by the income from the TV licence paid for by everyone who has a TV and costs £175. The Blair government gave everyone above 75 a free TV licence as part of its settlement with BBC.

But the Conservatives (who never liked the BBC) have removed the subsidy. So BBC wants the elderly to pay. This is the precise audience who like Rule Britannia and the flag waving. Amol Rajan who is media editor with BBC has just accused it of becoming “the broadcasting wing for Black Lives Matter”!

There is a petition going around asking Lord Hall, the departing director general of the BBC, to change his mind. BLM is impacting everything now, even music!