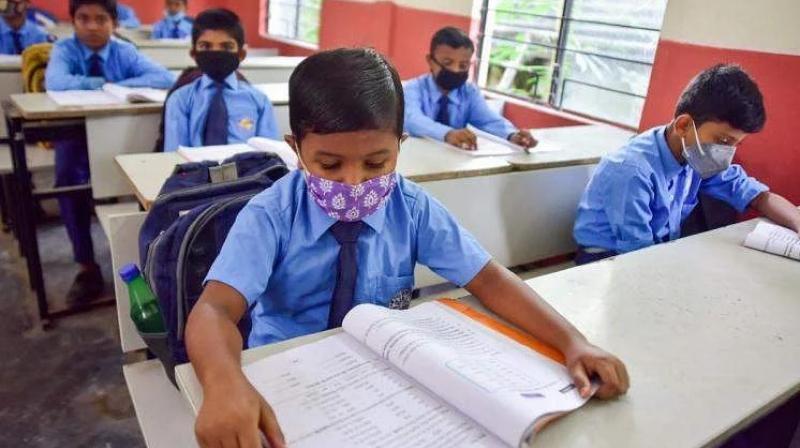 All children in primary schools need personalised guidance from their teachers. (PTI Photo)

The availability of timely and reliable data and the use of epidemiological evidence has not been seen as the characteristics of decision making for the response to the Covid-19 pandemic in India. The unavailability of epidemiological data on various aspects of Covid-19 — such as the age-wise distribution of Covid-19 cases and the time trend and distribution by states — has given way to misinformation such as the belief that children would be among the most severely affected in the third wave in India. This now seems to be impacting the decision to reopen schools in this country.
For many months, schools in India have been closed with nearly no or very limited attention and public discourse on their reopening. Finally, when the states are reluctantly taking the decision to reopen the schools, the process seems to be painfully slow and not insufficiently informed by epidemiological evidence. As an example, most of the global evidence is that primary schools should be the first to be opened; however, nearly all states in India are doing exactly the opposite — opening the higher classes first, and the primary classes last. Let’s understand why primary schools should instead be the first to open.

Schools for all age groups need to be opened now because the risk of the SARS CoV-2 infection in children is similar to that of adults; the risk of children developing moderate to severe Covid-19, in comparison to adults, is still extremely low. The scientific reason is that children do not have sufficiently developed ACE-2 receptors, which SARS-CoV-2 needs to enter into the lungs and then cause the serious disease.

In addition, the evidence from various studies have found that school opening does not alter or increase the risk of infection in children. The schools are not super-spreading and the benefit of in-person learning in the schools is far greater. That’s why, by the end of July 2021, more than 175 countries had their schools open.
In fact, the schools are open despite the fact that children younger than 12 years are not receiving the Covid-19 vaccines in any country of the world. On the contrary, many in India are arguing that children can be sent to schools only when they complete their vaccination. That is not scientifically valid. Global experts have said that vaccination is not a prerequisite to opening schools. The vaccines for even 12-17 years are being given only in a few countries and mainly to the high-risk children in this age group, who have pre-existing illnesses.

Children are naturally at low risk from Covid-19. The global data on the age distribution of moderate to severe illness and mortality follows a “J” shaped curve. In this curve, all children in the 0-18 bracket are at far lower risk than adults. Along with that, at the base of the “J” are 10-year-old children who are at the lowest risk among all age groups. Thereafter, the risk increases every passing year -- in both directions – from nine years downwards till one year, as well as 11 years upwards till 100 years. This makes children around the base of the “J”, the six-year-olds to 14-year-olds, or the age group in the primary and upper primary schools, at the lowest risk of Covid-19. This is the reason why primary schools must be the first to open.

In addition to health, there are educational considerations. All children in primary schools need personalised guidance from their teachers. Those who are in Class 1 or Class 2 have essentially just entered the schooling system, are still learning the alphabets and numbers, and need fast greater personalised guidance. Over and above that, the younger children are allowed limited “screen time” — the time they can spend in front of a mobile or computer screen. While children in the senior classes have reading and learning abilities, and they can do self-study and be allowed more screen time as well.

The disruption in education at an early stage may have long-term effects. The loss of learning at this stage means that in the subsequent classes, learning would be sub-optimal, which can result in many of them lagging in their learning, leading to a rise in dropouts from the education system. Due to this initial poor learning, over the years the cumulative learning loss for primary schoolchildren would be extremely high, which is why the return to schools should be prioritised for children in the early classes. If this is not addressed, the learning loss is expected to widen the already existing and widespread learning inequities by gender, socio-economic status and geographies, among other factors.

Education has individual and societal benefits. The individual benefits are in terms of better jobs and increased family earning in the future. The societal benefits are in an educated and possibly better skilled workforce, contributing to increased work productivity and the economic growth of the nation. The impact of school closures during the pandemic will only be known in the years ahead, and if not addressed urgently, will adversely impact India's effort to pull people out of poverty and to speed up GDP growth.

Putting both health and education perspectives together, the maximum loss in this pandemic is likely to be of those who are the least at risk — all children, and more so those in primary schools. India has missed many opportunities to use data, science and epidemiological evidence for Covid-19 related policymaking. It has another opportunity to use the data and epidemiological evidence to decide on school reopening. Let’s open the primary schools first.

Chandrakant Lahariya is a physician-epidemiologist, a public policy and health systems expert and co-author of Till We Win: India’s Fight Against The COVID-19 Pandemic