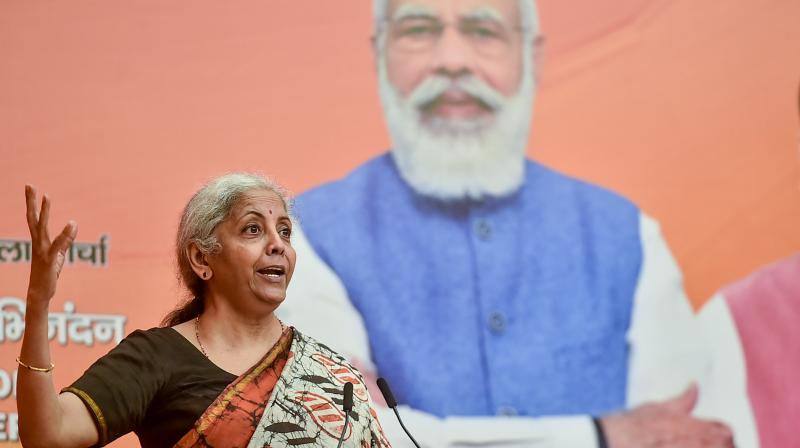 The lack of clarity on the thinking of the Prime Minister and the finance minister on macroeconomic policy has confused investors time and again. (PTI)

Few really expect this change in membership to make any difference to thinking and action on the economic policy front at the highest levels of decision-making given the track record of Prime Minister Narendra Modi. He has shown little interest in macroeconomics and at the level of the PM it is the Big Picture that counts, not the nitty gritty of sectoral policy that line ministries should normally be focused on.

Similarly, the decision of the chief economic adviser, Krishnamurthy Subramanian, to return to his academic post with his term ending barely two months before the presentation of the Union Budget and the Economic Survey to Parliament, has also been treated in a routine manner. The vacancy will be filled up by December, and the transition is unlikely to make much difference to the writing of the Economic Survey. With the minimum qualification for the post diluted, no longer a doctorate but only a masters’ degree in economics, the current second-in-command, Sanjeev Sanyal, can easily move into the job and complete writing the Survey. Mr Sanyal, a Rhodes scholar, is talented and is reputed to have the PM’s ear, being an ardent Narendra Modi loyalist.

The reconstitution of any advisory council to the head of government in any modern economy is always a subject of much analysis and interpretation. Analysts look to policy pointers, to the ideological predilections of those going out and those coming in to interpret the likely influences on the head of government.

In India too, there was a time when government watchers looked closely at who was in and who was out when it came to economic policymaking. In Indira Gandhi’s and Rajiv Gandhi’s years in office, the battle for policy influence was between the “leftist” and “rightist” economists. Prime Minister Manmohan Singh had a mind of his own on economic policy, but gave equal attention to the views of other talented economists like C. Rangarajan and Montek Singh Ahluwalia. After the UPA came to power in 2004, Dr Singh played a key role in economic policy formulation in the early years, but in his second term a large part of the policy initiative slipped into the hands of then finance minister Pranab Mukherjee.

Economic policy watchers in New Delhi have often wondered who among the economists in the government Prime Minister Narendra Modi pays attention to. Surely both the chairman of the PM’s Economic Advisory Council, Bibek Debroy, and the vice-chairman of the Niti Aayog, Rajiv Kumar, must have the PM’s ear and he should be reading whatever notes they put up to him, but it is not clear what impact their views and those of other members of the PMEAC and the Niti Aayog have had on the PM’s thinking. Reading some of the published work of these worthies makes one wonder if the policymakers in government have been reading them or not.

More recently, a divide has emerged between the BJP’s traditional swadeshi economists and the more market-oriented economists on foreign trade policy. Economists Surjit Bhalla and Rakesh Mohan, both now advising the PM, have differed on a range of policy issues over the past couple of years, barring privatisation, and it remains to be seen who between them will have more influence on the Prime Minister.

As for the CEAs in the Modi government, the less said the better. Neither Arvind Subramanian nor Krishnamurthy Subramanian have had the kind of influence on the PM’s thinking on economic policy that some of their illustrious predecessors have had. Dr Subramanian will probably be remembered more for his insistence that the post-Covid lockdown recovery has been V-shaped, ignoring its’ visible K-shape, than any other policy idea.

Not surprisingly, even within the finance ministry, the CEA has been reduced to the status of head of research rather than the head of policy. It is often forgotten these days that the CEA is not merely a functionary of the ministry of finance but is in fact the chief economic adviser to the Union government. Some of the past incumbents have had profound influence on policy since they were able to secure the attention of none less than the head of the government.

The CEA’s policy remit was not only wider in the past, but the annual Economic Survey, that is produced under the CEA’s charge, was usually regarded as the official economic policy statement and document of the government. Over the past decade, beginning with Dr Kaushik Basu and continuing with his successors, the Economic Survey has become a semi-academic publication, like the many papers that come out of think tanks.

Both finance ministers, Arun Jaitley and Nirmala Sitharaman, distanced themselves from some of the ideas in the Survey, claiming that they were not the views of the ministry but of the publication’s authors. Beyond appearance in the mandatory pre-Budget photo-op and post-Budget media interviews, it is not clear what role the CEAs of today actually play in Budget-making. Many distinguished CEAs have in the past been called upon to write the finance minister’s Budget speech. It appears this is no longer the case. Though, if Mr Sanyal becomes the CEA, he may well end up writing the finance minister’s next speech.

The lack of clarity on the thinking of the Prime Minister and the finance minister on macroeconomic policy has confused investors time and again. Ill-considered initiatives like demonetisation, half-baked ideas like issuing sovereign bonds in global markets, a confused Goods and Services Tax policy, and so on give the impression that economic policy in the Narendra Modi government is arrived at through trial and error rather than a medium to long-term strategy.

Mr Modi’s trial and error and “hit and run” policy on the economic front has meant that most informed opinion on the economy, including that of those advising the government at various levels, is that economic growth will remain subdued well into his second term and the decadal average for his tenure will remain way below that recorded during Dr Manmohan Singh’s decade in office.