The Maryland shooter may have nursed a grouse against the particular newspaper against whose journalists he acted in hate. 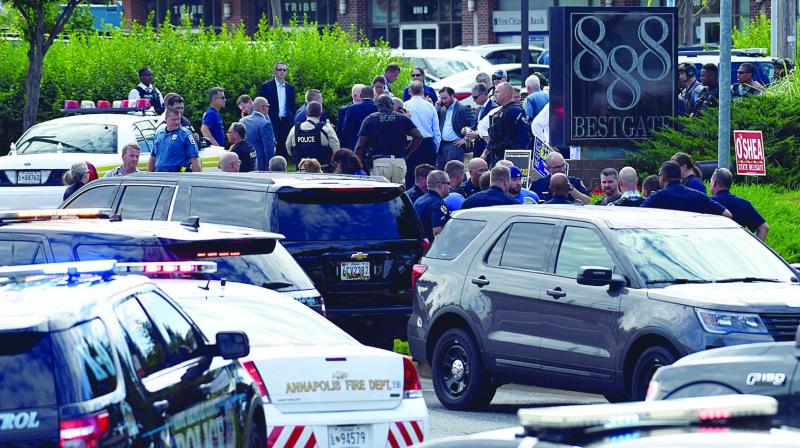 Policemen secure the scene of a shooting in Annapolis, Maryland. (Photo: AP)

The calculated and cynical manner in which a man walked into a newspaper office and shot journalists and staff in Annapolis, Maryland is not merely a ghastly reminder of what the right to own guns in America means. After all, the average mass shooting gun event has been about one a day in the US this year. The issue goes beyond the Second Amendment and the right to protect oneself. It is the atmosphere of hate built up against the media that may be leading to such deadly attacks aimed at journalists, not only in the US but in India as well. Shooting the messenger is not going to solve the problem or make it go away, but social groups, politicians and thought leaders have not been seen condemning such acts enough.

The Maryland shooter may have nursed a grouse against the particular newspaper against whose journalists he acted in hate. However, it is the narrative Donald Trump has built up about the media being “the enemy of the American people” and frequently berating it as “fake news” whenever an issue of public importance is brought to light that may be leading even the free world to hate the bearers of ill tidings. It is the duty of the media to stand up and speak the truth to power. A free voice is the very foundation of democracy, but it hardly ever suits those in power. The silencing of a moderate voice of reason in Kashmir as in the killing of Shujaat Bukhari in a plot stitched together in Pakistan was converted into a warning for other journalists by a BJP leader in the Valley. History will bear out that media voices are never snuffed out altogether as many will rise in the place of one who falls to evil bullets.