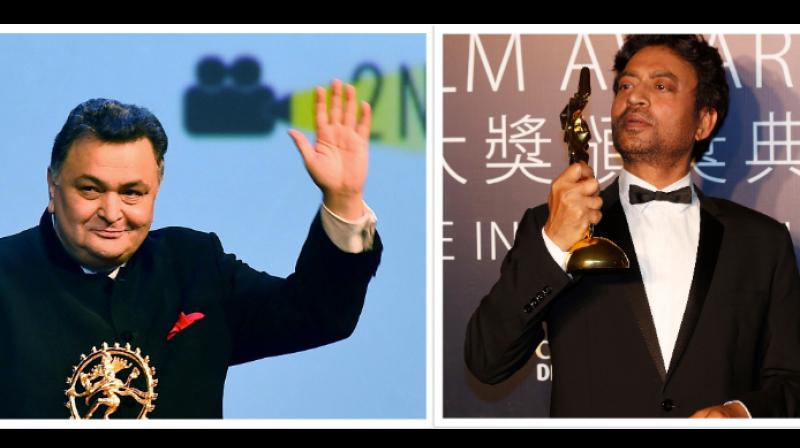 Their backgrounds and career ascent may tell a tale of the stark contrasts of India but both Irrfan Khan and Rishi Kapoor will remain stars in our hearts. PTI photo

Unlike tempests, floods and fires, the virus is not a danger to Earth’s beauty. What it has done to the spirit though is of an altogether different dimension, its sinister characteristics a blow against what used to be normal for mankind. Also, in the times of the pandemic, when many a Citizen Joe has gone to his grave unsung, celebrities are among the numbers too in this deadly game. The departure of the more creative ones among them leaves an ache in us as we consider and even play back their vast contribution to the arts. John Prine, Lee Konitz, Ellis Marsallis are all in a long list of American musicians which seemed to suggest a surreal link between creativity and Covid-19.

Closer home, the loss of two legends of the silver screen on successive days brought on a wave of particular sadness. Sadly, Irrfan Khan might be considered collateral Covid-19 damage too as his plans to return to UK for continued treatment may have been stymied by the lockdown. He was a consummate actor who crossed continents to make greater name and fame. His restrained, almost understated elegance, may have suited Hollywood more and which is where he was to get significant roles as a thespian. Through the prism of his characters we lived through many different experiences.

At the other end of the spectrum, the scion of India’s “first family” of movies, Rishi Kapoor, was one who had sold Indian youth romantic dreams of going on to live  happily ever after. With his on-screen ebullience and themes of love that were bold in more conservative times, this Kapoor wove the kind of magic that Bollywood and its song and dance became universally famous for.

Their backgrounds and career ascent may tell a tale of the stark  contrasts of India but both Irrfan Khan and Rishi Kapoor will remain stars in our hearts for showing us the power of cinema, which has captured India’s heart and soul, though its halls are sadly silent now in this hour of a global threat.