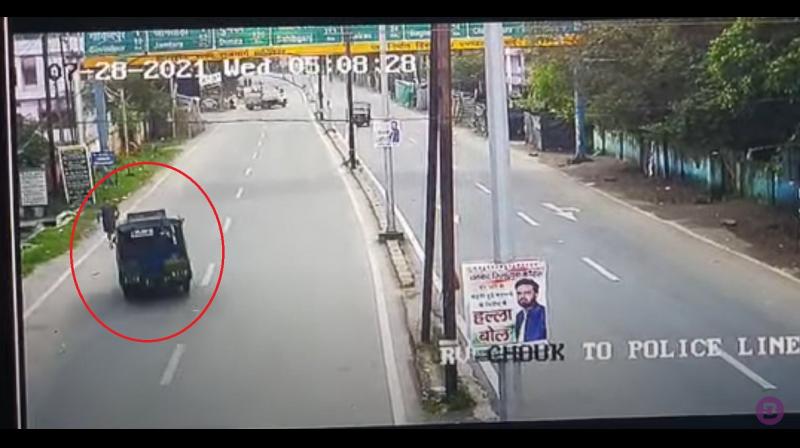 A video which has surfaced shows that a three-wheeler auto-rickshaw headed straight for the judge on an empty stretch of the road. (Twitter)

The Supreme Court is right to believe that the “gruesome incident” on July 28 in which Uttam Anand, additional sessions judge in Dhanbad, was killed has “larger ramifications”. Pronouncing this upon taking suo motu cognisance of the incident, the circumstances surrounding which suggest that the mowing down of the judge in a supposedly hit-and-run accident was a case of cold-blooded murder, Chief Justice N.V. Ramana has said the top court would address larger questions of security for judges across the country.

The promptness of the CJI in taking the initiative in this matter has evidently galvanised the system. Jharkhand chief minister Hemant Soren has recommended a CBI investigation. He is right in doing so. The infamous mafias of Dhanbad, the country’s most important coal-bearing region, are widely believed to be in cahoots with the critical elements in the power apparatus and among the political class.

We hope the CBI will receive the clearance to take up the matter without delay.  The criminal trail, if indeed there is one, must not be allowed to go cold. There have been suggestions that the deceased judge had denied bail to gang-lord elements days before his death. He died when he was out on his early morning jog.

A video which has surfaced shows that a three-wheeler auto-rickshaw headed straight for the judge on an empty stretch of the road. One of the two persons sitting in the vehicle is thought to be a criminal character. He is now in police custody. Given the notorious police-politician-criminal nexus, to which attention had been drawn in the Vohra Committee report of 1993, every care must be taken to ensure that an impartial probe is conducted in quick time.

So that judges may not be cowed down in dealing with serious crime, it is important that CJI Ramana’s plan for the security of judges is framed expeditiously. It must be such that responsibility is unambiguously fixed for thorough investigation culminating in a transparent trial. The police are the first rung of the criminal justice system and ought to be seen to discharge their responsibility with commitment.