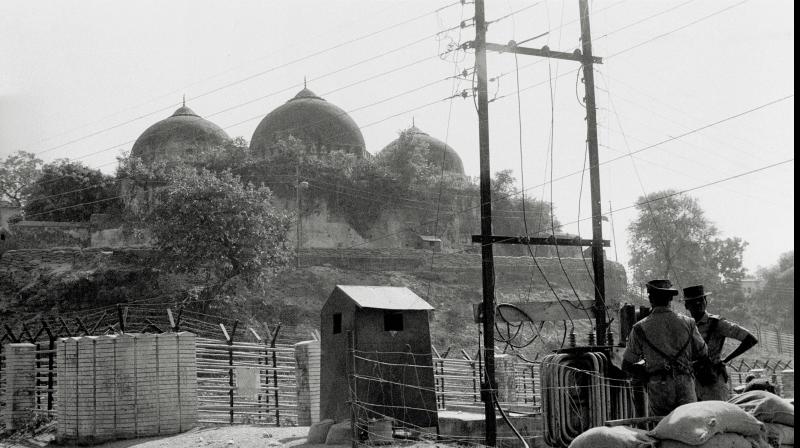 - In this Oct. 29, 1990, file photo, security officers guard the Babri Mosque in Ayodhya, closing off the disputed site claimed by Muslims and Hindus. AP Photo

The verdict of the CBI special court in Lucknow acquitting all the 32 accused in the conspiracy case that led to the demolition of the Babri Masjid on December 6, 1992, has dealt a more grievous injury to the citizens’ trust in the idea of rule of law than the razing of the very mosque.

The special judge has decided after assessing the evidence presented before him by the premier investigating agency, the Central Bureau of Investigation (CBI), that the 16-century structure was brought down by a “group of hooligan kar sevaks” who “suddenly got agitated” and brought down the structure though the Justice Liberhan Commission had reported that they did the job with “pickaxes, hammers, iron rods and shovels”.

The judge points to the innocence of the leaders saying Vishwa Hindu Parishad leader Ashok Singhal tried to stop the kar sevaks from assaulting the place of worship as it housed the Ram idol.

Justice Liberhan, however, notes that “they (the kar sevaks) first entered the sanctum sanctorum and carefully took the idols and cash box, etc to a safe place.”

The judgment will now cause the patriarchs of the Hindutva movement who worked tirelessly and toured extensively towards instigating people into shouting “mandir waheen banayenge (will construct the temple on the spot where Babri Masjid once stood)” to walk free, but force those who watched the “egregious violation of the rule of law”, as the highest court of the land called the criminal act, to look for reasons to believe that this nation remains a democracy bound by the rule of law.

That some of the perpetrators had later taken credit for their role in the act makes their pain acute.

While the judiciary was a hapless onlooker when the Babri Masjid was bought down against an order of the Supreme Court to maintain the status quo, it was not so when the culprits were brought before it.

It had the power to assess the chargesheet and see if it has verifiable proof in a case on which the highest court in the land had made a comment. That the court made no effort towards it adds to the disappointment.

It is now up the CBI to salvage its image as well as the people’s trust in the institutions of democracy by going in appeal and argue its case. That the court has trashed the pieces of evidence such as photographs, videos and voice samples as inadmissible tells on the professionalism of the agency, an aspect its controllers in the government must look into.

When the dust dies down in Ayodhya and the haze disappears, the picture becomes clear: the majoritarian thought has seeped into all the arms of the government.

And rule of law, the primary offer of democracy, has become the first casualty. Constitution alone cannot protect it; rather, it will be next in the line, unless its believers rose to defend it.