Mr Putin is increasingly short of options on how to end the misadventure except to take a bit of territory and rattle the nuclear sabre. 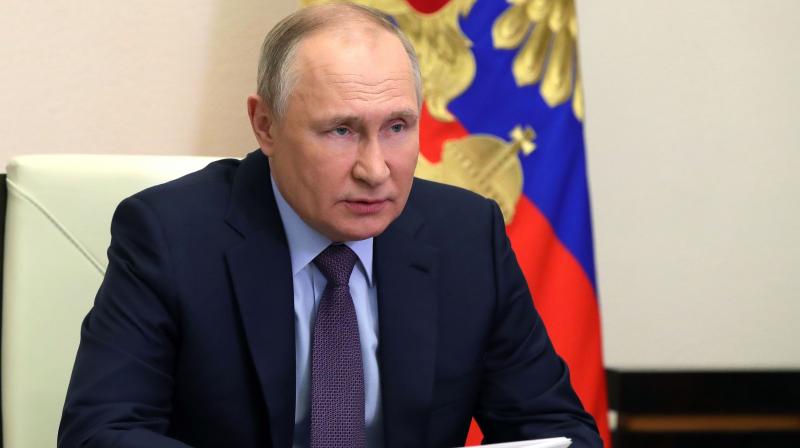 Russia’s Vladimir Putin is on his nuclear brinkmanship trip again after annexing four regions of Ukraine and in the process exposing his true intentions of territory grabbing when he embarked on a war 222 days ago. Having boxed himself into a corner in exchanges that have not gone according to his Army general’s plans, Mr Putin is increasingly short of options on how to end the misadventure except to take a bit of territory and rattle the nuclear sabre. Egging Mr Putin on to use at least battlefield nuclear weapons in Ukraine are hardliners like former president Dmitri A. Medvedev and Russia’s Chechen allies who believe Nato cannot risk retaliation. And the world is feeling a chill not experienced since the Cuban missile crisis in 1962.

Mr Putin’s offer of talks after the referendums and the announcement of annexation by which those living in Donetsk, Luhansk, Zaporizhzhia and Kherson have been declared as citizens of Russia comes when Ukraine can hardly agree to sit across the table and discuss a ceasefire since its territorial sovereignty has been breached. Russia’s hold on Ukrainian territories, which it declares it has annexed after holding fake referendums last week when people were forced to vote at gunpoint, is tenuous. Ukraine, after recapturing Kharkiv, has also retaken Lyman, a crucial logistical railhead in the Donetsk region, and is cranking up its counteroffensive to try and retake more towns in the Donbas region.

The situation seems loaded with existential threats far beyond Ukraine. So much so, even the “no limits” ties with China and friendship with India — reflected as recently as in abstentions from the UNSC vote — may be stretched soon as the vote against Russia may move to the UN General Assembly where there is no veto. Notwithstanding the minor gains for China and India, which are accessing gas and oil at discounted prices from Russia, the interconnected world of today is ill at ease as the war rages on and everyone suffers the after-effects of super high prices even as recovery from the Covid pandemic has hardly begun.

Mr Putin’s speech on Friday, in which he named the US and the West as “Satanic” and even dragged in Harry S. Truman’s nuclear bombing of Hiroshima and Nagasaki 77 years ago as a precedent, may have come from a man under stress waging what seems an unwinnable war. That prompted even more promises of weapons aid to Ukraine worth billions of dollars from just the US. While that would please the military-industrial complex, it does little for a world aghast at the brazenness with which one of the bigger powers could invade a country, ignoring territorial sovereignty that is the very basis of a law-based international order, and annex land and threaten nuclear war.

So far gone are the forces engaged in the war over Ukraine that Prime Minister Narendra Modi’s well-meaning advice to Mr Putin — “This is not the era for war” — seems too mild a rebuke to impose any change of mind in the aggressor Russia and its leader’s romanticised revanchist dream of rebuilding a Soviet Union that broke up in the 1990s, signalling the end of the Cold War.

The talk of using a few of about 2,000 tactical nuclear weapons may be a way to extract concessions after battlefield losses and an unpopular mobilisation plan that has seen more Russians leave home than are involved in the Ukraine war. Meanwhile, the world breathes uneasily, praying for a miracle to end a war that has spawned the madness underlying the incantation of nuclear threats.