New Delhi must be deft and practical if it is to play a moderating influence without appearing to meddle in Sri Lankan politics. 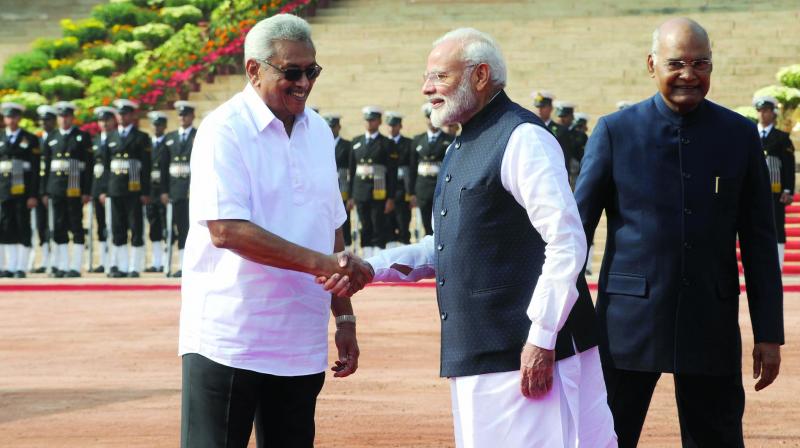 Sri Lanka’s new President Gotabaya Rajapaksa made New Delhi his first port of call, after our external affairs minister S. Jaishankar flew in right after the results to greet him, with the visit offering the first opportunity in a long time to smoothen ties.

The President is a former Army officer who was his nation’s defence minister when his brother Mahinda was President, and played a key role in bringing the LTTE militancy to a decisive closure in 2010, not shying away from using questionable means that drew an adverse global reaction.

He was elected with a massive mandate based on the country’s Sinhala majority. This can conceivably turn the Sri Lanka leader in a majoritarian direction.

New Delhi must be deft and practical if it is to play a moderating influence without appearing to meddle in Sri Lankan politics. Mr Rajapaksa told India that he would be receptive to its security concerns over China (and Pakistan). He suggested in a newspaper interview that his country’s interest in China was “purely commercial”. Thus, the return of Chinese submarines to Sri Lankan waters is not an immediate possibility.

This is a good start. However, the President was careful to urge India and others (Japan, Australia, Singapore) to invest in a big way in Sri Lanka, otherwise (he implied) China’s importance in the island nation cannot be wished away.

While Mr Rajapaksa promised to pump in economic aid to Tamil areas, he was clear he can’t effect devolution of power to the country’s north and east, as this won’t be acceptable to the majority community. India had mounted pressure on this question, principally due to sensitivities in Tamil Nadu. New Delhi will have to manage Chennai very carefully if it is to help Jaffna have a secure political space within a united Sri Lanka.