It is crucial that the Opposition, the ruling party, and those that are prone to sit on the fence seek to define farmers and hooligans 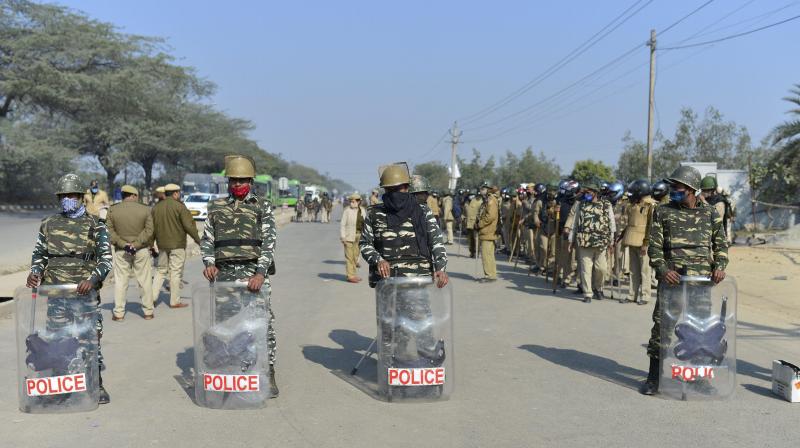 Are India’s farmers -- who have mounted a full-scale agitation to secure the rollback of three agricultural reform laws passed without consultation with them -- hooligans? The narrative built up by the Centre and its supporters, including in the media, has been built assiduously around exactly this idea. It’s in the chaotic events of Republic Day in New Delhi that the justification is sought to be excavated to denigrate the community of food-growers thus.

From this springs the presumed validation of the rationale to deny farmers both the physical and moral space to protest, and deny them basic human rights by choking off avenues of water supply, their prospects of securing food by blocking transport channels, and by switching off the Internet that is crucial for them to communicate their voice of protest; in short virtually stamping out their right to free speech.

These moves appear to be a prelude to the unleashing of fierce punishment on the farmer-protesters. Depending on circumstances, such punishment may take the form of brutal executive action. Or it’s possible sections of civil society that ruling party outfits control are let loose on protesters. A trailer of this was seen recently when marauding young men in the hundreds, pretending to be “locals” inconvenienced by the agitation, descended on the camps of protesting farmers and their families as the police watched. In the times we live in, it will be a surprise if the government, if it so desires, fails to secure convenient judicial pronouncements.

Now that the hurdles have been cleared for a debate in Parliament on the farmers’ protest, it is crucial that the Opposition parties, the ruling party, and those that are prone to sit on the fence seek to define farmers, farm agitators and hooligans.

Before any judicial inquiry is instituted -- if that is done -- it is incumbent on the political class to frame a definition and tell us if they believe the men who indulged in violence and marred the spirit of Republic Day by unfurling religious flags and symbols at the Red Fort were farmers. In the narrative backed by the government and its supporters, these criminal elements are being called “farmers”, no less. But are they? Or are they calculatedly infiltrated fifth columnists tasked with maligning an entirely peaceful agitation that the government wasn’t sure how to handle?

It seems quite extraordinary that the police and the National Investigation Agency, that is routinely unleashed on harmless civil society protesters, has not been directed to trace the whereabouts of a loud-mouthed actor who had acted as a BJP MP’s election agent in Punjab, and his accomplices who are listed as bad characters in Punjab. From this person’s remarks, it would appear he is a votary of “Khalistan”. While that may not be held against him, his actions on Republic Day merit thorough scrutiny.

The government is yet to exhibit due diligence in this matter. But it has shown alacrity in hammering thousands of nails in the roads, and erecting layers of barricades, presumably to ensure that the farmers don’t go on the rampage on their tractors. But have they ever done so in the past? What we see here is a glimpse of Chinese or Russian police state tactics in action, not those of – what we so proudly claim -- the world’s largest democracy!