The new law undercuts Article 18 of Hong Kong’s Basic Law, which limits Beijing from applying national laws to the territory 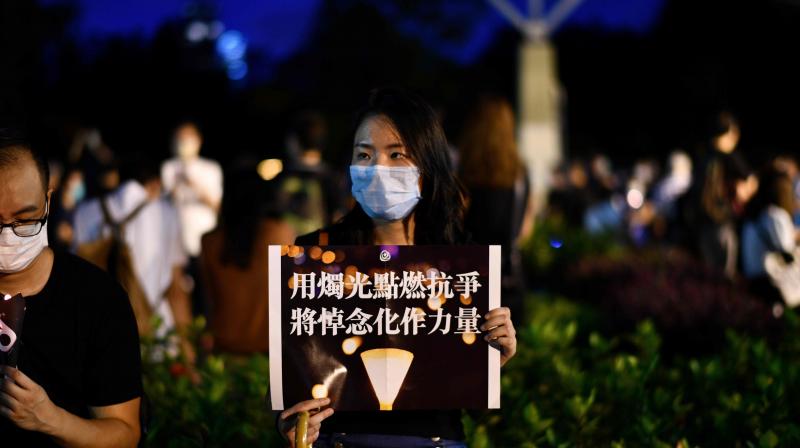 An activist holds a placard during a candlelit remembrance outside Victoria Park in Hong Kong on June 4, 2020, after an annual vigil that traditionally takes place in the park to mark the 1989 Tiananmen Square crackdown was banned on public health grounds because of the COVID-19 coronavirus pandemic. AP Photo

A new law threatens Hong Kong’s political freedoms even as the semi-autonomous territory on Thursday banned an annual vigil to remember the 1989 Tiananmen Square massacre — a first in 30 years.

Passed by the National People’s Congress of China (NPC), the law undercuts Article 18 of Hong Kong’s Basic Law, which limits Beijing from applying national laws to the territory, except in matters of defence and foreign affairs, and it completely bypasses the legislative council, the lawmaking body of the region.

It empowers the NPC to draft national security laws that will create new “national security crimes” in order to ban activities deemed as treason, secession, sedition and subversion. The aim is to more effectively crush the pro-democracy protests in Hong Kong, ongoing since March 2019.

Ironically, the council criminalised slighting of the Chinese national anthem, “March of the Volunteers”, also on Thursday, possibly in anticipation of this new set of laws. Thus if the pro-democracy campaigners had hoped to wrest back rights for Hong Kongers before the territory got handed over to China in 2047, the Chinese legislation has set them back way behind the starting line.

Though Indian Hong Kongers, who number around 45,000, have overtly stayed away from the protests, the business community there thrived under British trade laws and historically enjoyed the patronage of the dreaded anti-Communist triads that supported Kuomintang.

Even though a liberalised China is unlikely to move to financially repress the business hub, now that the United Kingdom has promised to rewrite visa rules to admit up to nearly three million people from the city — most of whom had been living there in 1997 at the time of the British handover but wish to return under changed circumstance — Indians, too, might have wished to join the exodus.

The catch is that all emigrants from Hong Kong must own a British National (Overseas) passport. Between this fact and that India is unlikely to up the ante by raising Hong Kong with China diplomatically amid its raging border standoff, most Indians are thus left with no choice, after all, but to endure the impending persecution.