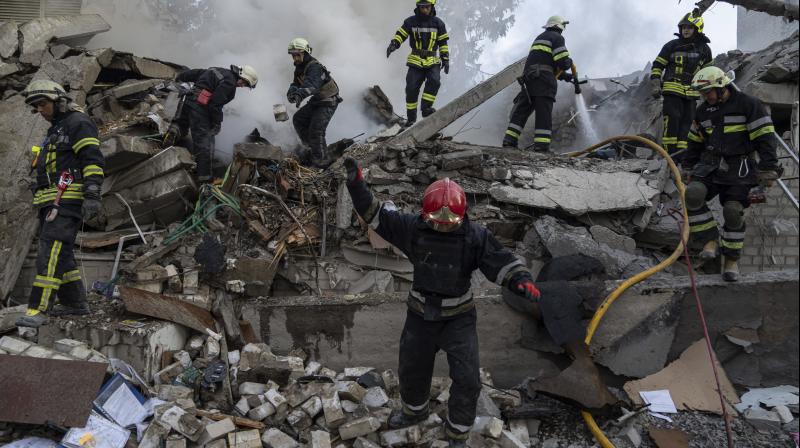 Rescue workers clearing rubble of a destroyed school after an attack in Kharkiv, Ukraine, on Monday, July 4, 2022. The Ukrainian military's General Staff says that Russian forces are trying to press their offensive deeper into eastern Ukraine after capturing a key stronghold. AP/PTI

The effects of a long-running Ukraine war are being felt almost everywhere as increased geopolitical risks have been weighing adversely on economic conditions since February 2022. A toxic mix of a reduction in GDP, a rise in inflation and sinking consumer confidence has proved lethal enough even as the deleterious effect of rising oil and gas prices have led to roiling of the financial and commodity markets. And yet no one is talking enough about it.

Prime Minister Narendra Modi was the last world leader to speak to the Russian President Vladimir Putin while impressing upon him the need for diplomacy to end the war. The West, bent on extending support to Ukraine while entertaining thoughts of what a messianic Putin could do with regard to his dream of a greater Russia, was too busy cranking up the pressure on him at G-7 and Nato meetings. Does the fact that Russia has Luhansk now and might take Donetsk soon enough at least lead to attempts at making peace?

Meanwhile, the economies are continuing to bleed. Sri Lanka is the worst example of a country that has come to a standstill because of the inability to pay for fuel even as food and medicine shortages cripple the island nation. How would stopping an economy help revive it? Pakistan feels the pressure too in terms of ballooning trade deficits.

Scenarios of a domino effect help throw the spotlight on many a nation that is feeling the pinch and manfully carrying on because there is no alternative.

The largest economies are suffering too, the US, China, the EU, UK, Russia, Ukraine… India can’t pretend that the world’s sixth-largest economy is not affected, a few curious interventions like raising the steel export tariff barrier and imposing a windfall tax on overseas shipments of oil tell the tale about its anxieties, besides a widening trade deficit. India may be buying Russian oil to cool its purchase price but it’s not making a virtue out of its neutrality. Will other voices rise to stop the war before everyone bleeds economically?