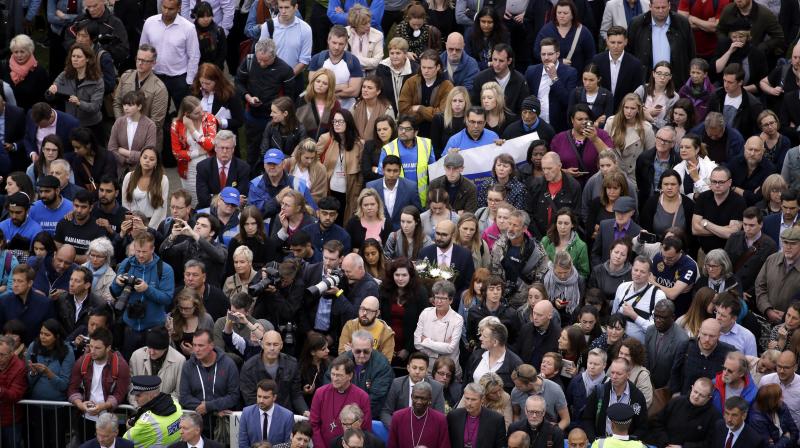 People attend a vigil for victims of Saturday's attack in London Bridge, at Potter's Field Park in London. (Photo: AP)

The recent terrorist strikes in London and in Kabul — the latter on the first day of fasting in the Muslim holy month of Ramzan, which was the deadliest since 2001 — suggests that the world needs to be far more proactive in tackling Islamist violence, wherever it may occur.

London was hit by a major terrorist strike late Saturday night, with Islamist terrorists first trying to run over pedestrians on London Bridge and then three men going around the busy Borough Market are nearby on a stabbing spree. This was the third terrorist attack in Britain in the past three months, two of them after the general election was announced. This does raise speculation whether an object of the terrorists was to influence the poll results. But no matter how that question is answered, it is undeniable, as Prime Minister Theresa May noted, that newer ways need to be found to “restrict the free space”, in communities and in cyberspace, in which terrorists — who practise a “perversion of Islam” — operate. This may mean modifying the legal framework so that freedom of speech is reconfigured in coming to terms with extremism.

It will be interesting to see how Britain goes about this. Civil society in the West has frequently been critical of India when it restricts Internet connectivity in Kashmir in the aftermath of major terrorist incidents. But the terrorist challenge cannot be met by putting more security personnel on the streets or in becoming trigger-happy. Having a heavy security apparatus hasn’t worked in Kashmir, although Kashmir’s special problem of being a border area must be recognised.

US President Donald Trump used the latest London incident to gain approval for his policy of denying visas to citizens of certain Muslim countries. It’s not clear how this can help even if it is conceded “political correctness” does not take us far.

The terrorist incidents in the UK and in Europe as a whole in recent times haven’t been perpetrated by new arrivals but largely by those whose families have made these Western societies their home decades earlier.

The recent truck bomb attack in Kabul has led the Afghan authorities to blame Pakistan’s Inter-Services Intelligence. This is not a knee-jerk reaction, given the politics of the past four decades. It also appears that one of the three London terrorists is of Pakistan background. It is time leading Western nations, and particularly the United States, acknowledged Islamabad’s role in first becoming the nursery of global jihad with Western connivance, and using terrorism as an instrument of policy in Afghanistan and India. A tough aid posture toward Islamabad, close military coordination against ISIS in the Iraq and Syria theatre, and a supportive US stance at the UN on defining terrorism will help to check Islamist terrorism globally.