Modi did not visit Ramallah, headquarters of the Palestinian Authority, and made it a standalone visit to the Jewish nation. 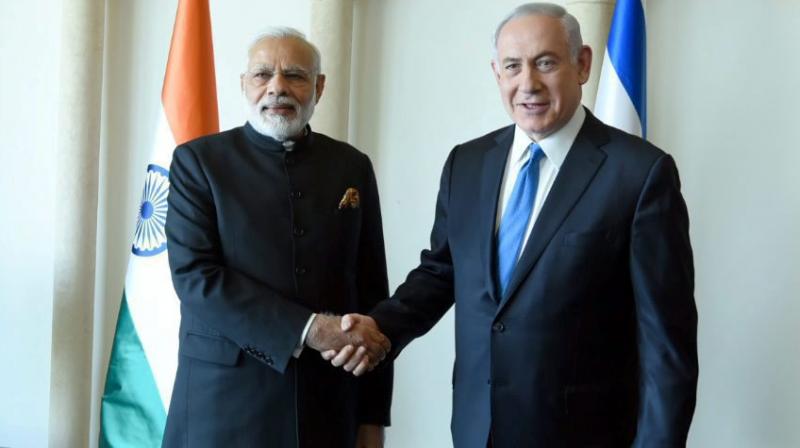 Prime Minister Narendra Modi has made history by becoming the first Indian head of government to visit Israel, thereby crossing the rubicon. More than the security relationship — fighting terrorism as well as building a muscular relationship in the defence and intelligence area is hardly new in their bilateral interaction — or expansion of ties in trade, or their coming together for industrial R&D and technological innovation, for which an MoU was signed on Wednesday, the Indian leader’s visit denotes the laying of the foundation for the building of strategic political ties with Israel.

To highlight this aspect, Mr Modi did not visit Ramallah, headquarters of the Palestinian Authority, and made it a standalone visit to the Jewish nation. In the past, Indian dignitaries have made it a point to visit both Israel and the Palestinian territories to underscore their commitment to the Palestinian cause, which has historically placed Palestine and Israel as adversaries. Mr Modi finessed this by playing host to Palestinian President Mahmoud Abbas in New Delhi in May.

Politically, it is the public raising of the profile of the relationship with Israel that sets Mr Modi apart from his predecessors. India had not supported Israel’s entry into the United Nations in 1949, but officially recognised it a year later. Prime Minister Jawaharlal Nehru said then that this was necessary as Israel’s existence was a fact. He said the recognition could not be done earlier in order not to offend Arab countries (in the context of the times). However, India let Israel open a consulate in Bombay (Mumbai) in 1953.

Practicalities were always on New Delhi’s mind. Two factors imposed limits on constructing political ties — the nonaligned movement, of which India was the acknowledged leader, which opposed colonisation in all its forms, and Israel had been created by the Western powers by carving up Palestine, and afterwards India’s dependence on Arab oil.

The fact that Israel was created on a religious basis (for the Jews), like Pakistan, was also an inhibiting factor in the building of political relations, although Israel had always been supportive of India in conflicts with Pakistan even though diplomatic ties were established only 25 years ago. At a formal level, the PM travelled to Tel Aviv and Jerusalem to commemorate this occasion.

From the beginning, Indian public opinion has been split on the question of Israel. Certain sections have admired Israel and the Jews as the latter have militarily fought Arabs (Muslims), while others have given importance to the cause of the Palestinians and issues relating to colonialism. In keeping with his Hindutva background, in Israel Mr Modi paid tribute to Theodore Herzl, the father of the Zionist movement, which had laid the seeds for a Jewish state.

Giving a political footing to relations with Israel will cement India-US ties as well given that Washington remains an important backer of the Jewish nation.