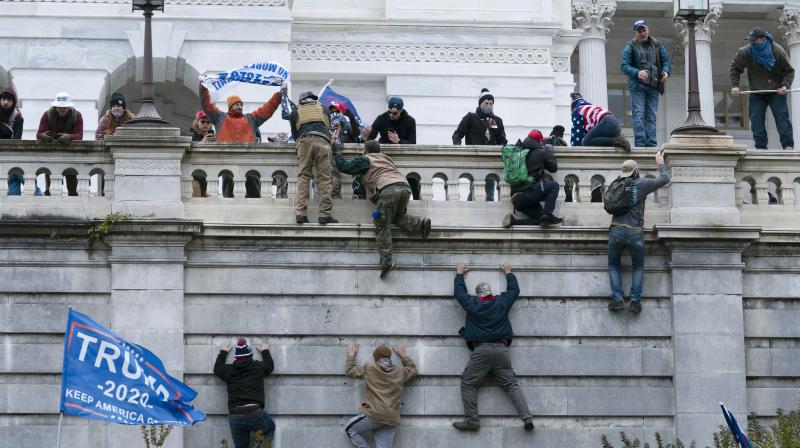 Supporters of President Donald Trump climb the west wall of the the U.S. Capitol on Wednesday, Jan. 6, 2021. (AP)

The violence unleashed by an invading mob ransacking the citadel of modern democracy was unbelievably shocking not only because they took place on Capitol Hill in Washington DC. The insurrection was sparked by the President of USA, Donald Trump, who incited his hardcore supporters to riot against this highly regarded symbol of the free world. All this would have been unthinkable if not for it being too predictable, as it was triggered by one of the most quixotic men to occupy the White House.

A day of such chaos as to shake the core of American democracy proved so futile in the end that its mastermind Mr Trump conceded he would respect the results of the election. Joe Biden of the Democratic Party had indubitably won the Electoral College votes as well as the voice of the people by seven million and is set to succeed him, after his victory was formally certified by the Congress at four o’ clock in the morning. Reason as well as law and order had dawned again.

It would be extremely charitable of the Republican Party that Mr Trump belongs to if it were not to give greater force to the thought that he should be declared mentally unfit to rule and stripped of the presidency less than two weeks before his term runs out. After seeing Mr Trump elected to the highest office without winning all the people over in 2016, the Republicans lost the majority in the House of Representatives in 2018, the Presidential election in 2020 and a majority in the Senate in the two runoff elections in Georgia in 2021.

The first ever Senate wins for the Democrats in a long time in Georgia were a final rebuke to Mr Trump, who had contributed by sowing doubts in democratic elections. How they allowed such a leader so much latitude in behaving as he did post November 3 is a mystery. Senior leaders like Mitch McConnell and Mike Pence did the right thing finally in disavowing their President. Vice-president Pence had, in the nick of time, upheld the highest traditions of democracy in carrying out the transfer of power, which is the very bedrock of democracy.

The scope allowed by the police forces in the Capitol for lumpen elements of the far Right to vandalise the Speaker’s office and lord it over the Senate chamber for a while was appalling. And while a tweeting Mr Trump acted out the modern version of Nero playing the fiddle, Mr Pence ordered in the National Guard to secure the Capitol and save it from a perfidious set of rogues set loose on the word of an obnoxious master.

It is no more a puzzle how blind loyalty can drive people as illustrated in an overzealous lady who had to be shot outside the door of the chambers into which lawmakers had been locked in for their safety. Of course, the greater is the responsibility among leaders to discipline their flock. Mr Trump’s biggest failure lay not in his buffoonery while in office and not even in his inability to lead when it came to personally dealing with an adverse poll result. His devilish goading of people to violence was responsible for the mayhem for which he will never be forgiven. He deserves his place in the dustbin of history.